I came home yesterday to find a box sitting on my front step. It was the familiar LP mailer box that I love seeing waiting for me when I get home. I picked it up and the return address said SPV Records. I wondered what could be inside so I quickly went in and got out the knife to open it up. 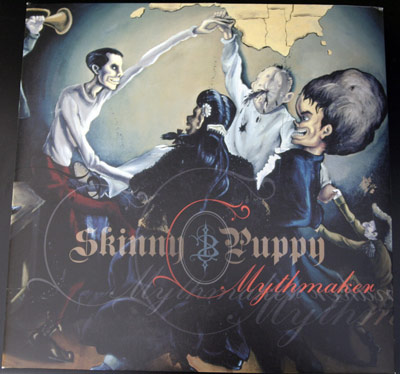 Inside I found the newly released vinyl version of Skinny Puppy – Mythmaker! Not only did they release this on the superior format of vinyl (the first time Skinny Puppy has seen a vinyl release of one of their albums since 1992), but they added bonus tracks not found on the CD!

This is a 2LP set inside a nice gatefold sleeve. Record one contains the full Mythmaker album and has the same ten tracks and the CD. Record two contains three bonus tracks: “Politikil (The Humble Brothers Remix)”, “Optimissed (The Humble Brothers Remix)”, and “Pedafly (Husky Remix)”. These three tracks are exclusive to this release, or are available on iTunes only. There is a promo CD floating around of “Politikil” that contains this remix which I was hoping to receive and still need a copy of for the sake of completion, though I was more than pleased that they sent this over as it is no secret how much I love vinyl. If anyone happens to have a spare copy of the promo CD, pleaese get in touch. 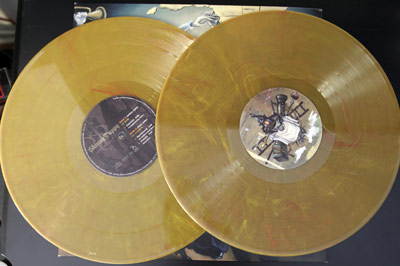 And to make the sweet package that much better, it comes on colored vinyl!

Many thanks to SPV for sending one over!

More information can be found at: