Skinny Puppy 11/9 at House of Blues

Monday night was the most exciting night of the year in music for me, the return of my favorite band in the entire world, Skinny Puppy! It had been over two years since they last played here. This time they are on the In Solvent See tour which unfortunately is not in support of a new record but truth be told, Skinny Puppy could do 100 tours without a new record and would still be worth seeing because they have a wealth of material spanning over 20 years to work from, not to mention they do still make new records which are quite good. 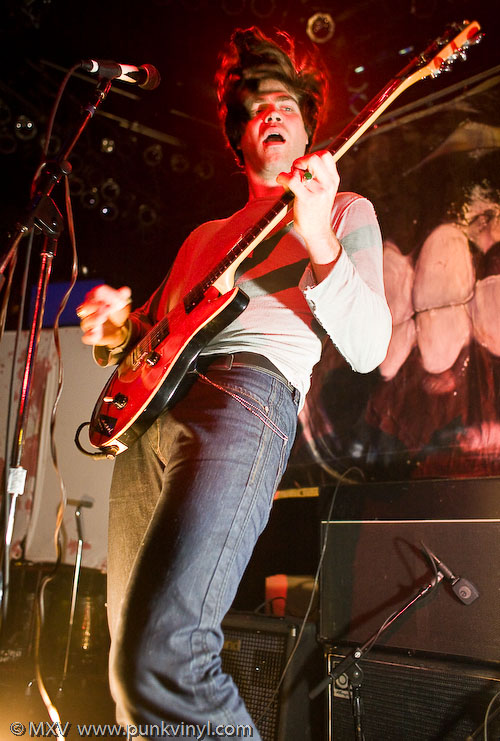 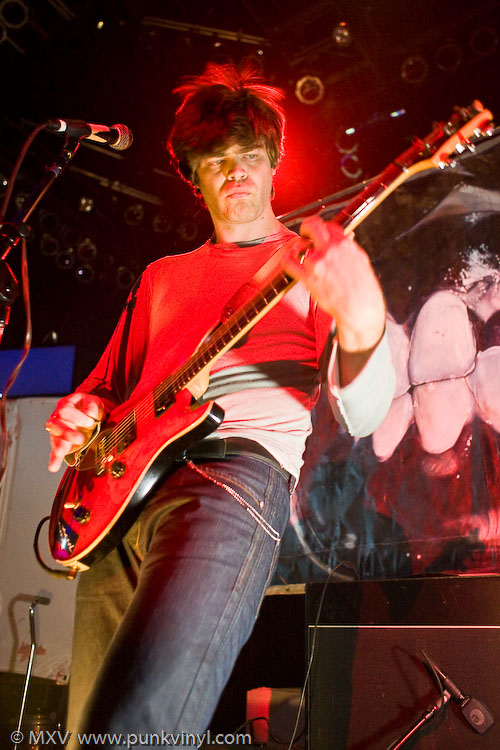 Vverevvolf Grehv was the opening act. It was a one man band where the guy played a guitar and had a laptop and a rack of effects. The best way to describe it was if Otto Van Schirach played death metal. The songs were mostly instrumental with only a few having any vocals and when they did it was your typical cookie monster growling type. It was mildly entertaining but most of the songs seemed to sound very similar. Had there been a bit more diversity in the different songs, I would have liked it a lot better.

Warning: if you don’t want any spoilers as to the Skinny Puppy set list you should stop reading now and just be content to look at the pictures. 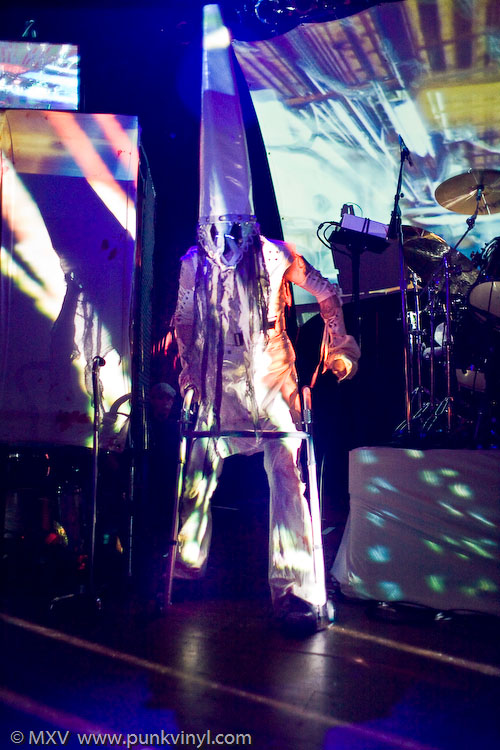 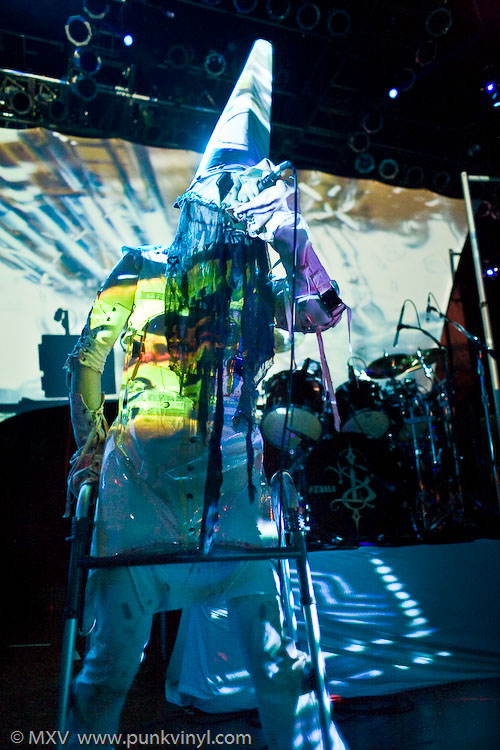 The club was pretty much packed from end to end by the time Skinny Puppy took the stage. When the lights went down the crowd roared with excitement. The opening notes of “Love in Vein” started and Ogre came out in this outfit that was part bishop, part demonic Jack Skellington, part medical experiment, and part monster. He was like a decrepit creature or some strange experiment victim who was using a walker to get around. As a character actor, Ogre is top notch as this creature hobbling around was totally believable with his mannerisms. There was barely any light, with most of it coming from the images on the screens behind the band and the occasional flashing light or two hitting Ogre as he hobbled around. 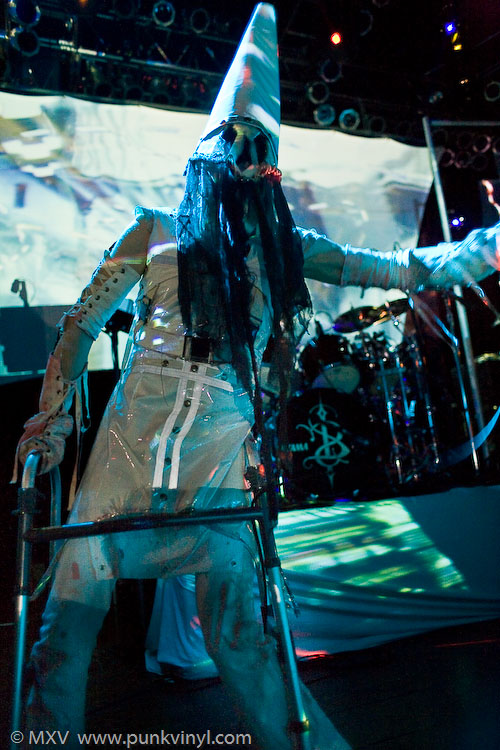 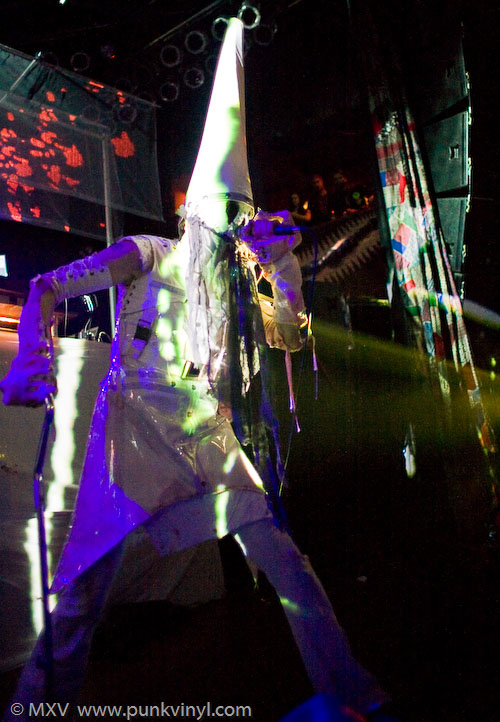 When the second song started Ogre’s character shed the walker for a cane and was moving about a little bit better. He looked very eerie limping about as Justin and Cevin were working their aural magic behind him up on a big riser. There was one giant screen behind them as well as some smaller screens in a line over Cevin’s head that had it’s own set of projections being displayed on which made for some neat looking effects. It was a really clever idea and one I hope gets repeated on any future tours. Cevin did some cool manipulations during the songs that breathed new life into them and made some songs really sound even more enhanced than usual. 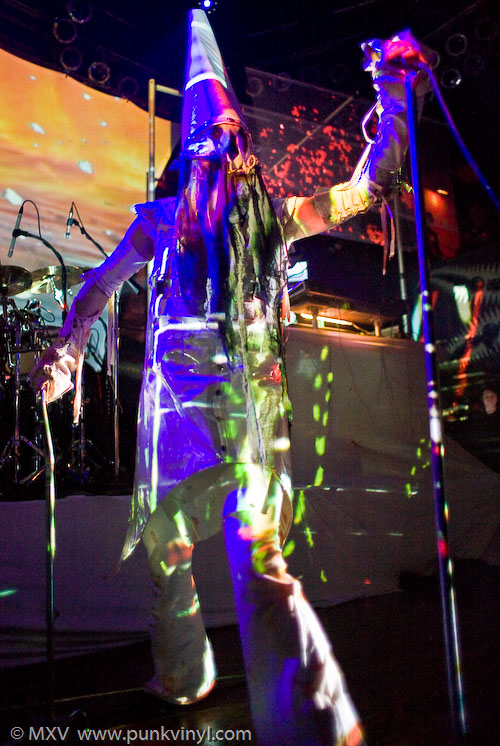 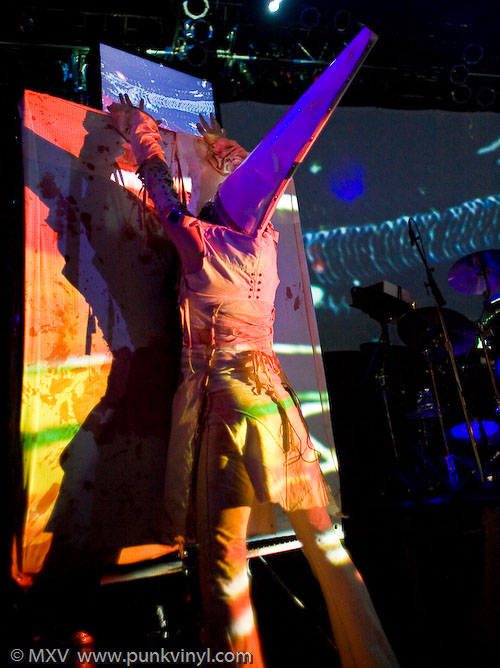 When the band played “Addiction” the main track sounded like it was based on the Doghouse Mix of the song which came across really cool live and made the song really stand out. I wish they’d release a live recording of that song because it was one of the best of the set. By this time Ogre shed the cane and would soon shed the top layer of his costume to reveal a new face, the one that looks a bit like a demonic Jack Skellington. 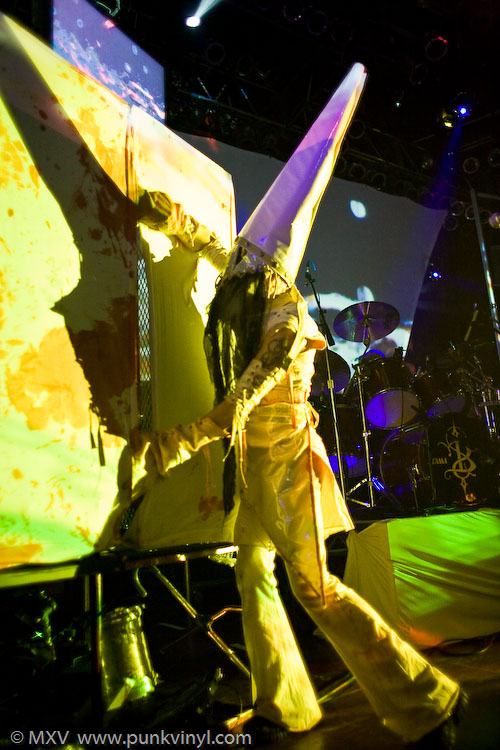 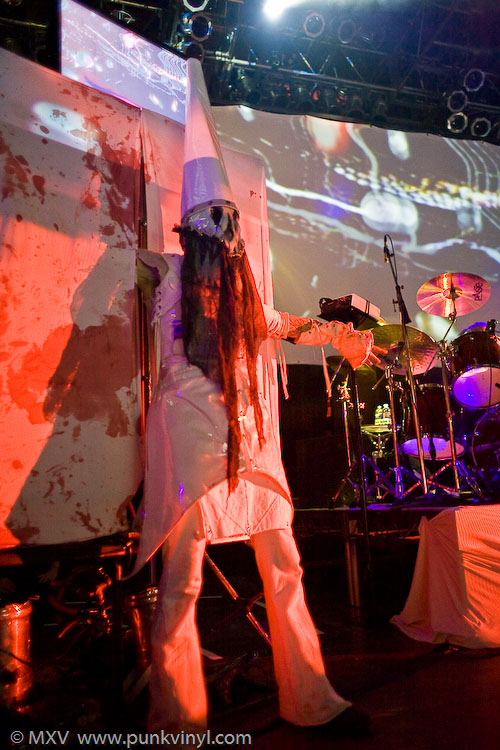 When the next song started Ogre entered a box that was covered with white sheets and had a video monitor on top of it. On the monitor you could see his masked face moving about as he flailed around inside the confines of his small prison.  That song was “Dogshit” and it never sounded better. In fact sonically the band was in top form this evening and played flawlessly and Cevin’s little enhancements to the songs were also in fine form. 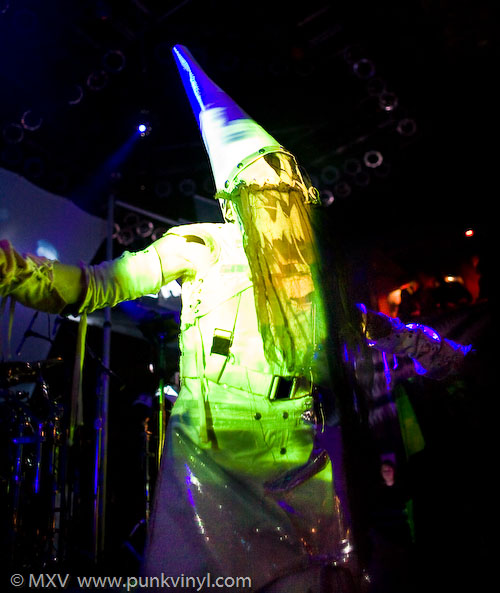 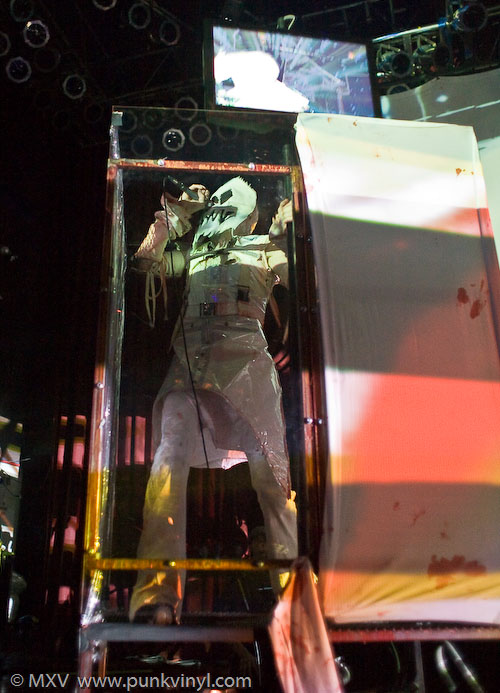 As the band belted out one great song after another with some fine surprises in older material they haven’t played live in close to two decades, Ogre eventually shed some more costume to transform into another character and the box shed the sheets to reveal a clear box that Ogre would go into again and get sprayed with blood. The show was surprisingly light on blood, perhaps the least amount in Skinny Puppy history, and it was also light on the recent material with only one song from The Greater Wrong of the Right and a couple from Mythmaker. Their choices of songs to play this tour was excellent and with a couple exceptions you couldn’t ask for much better in terms of diversity with their selection. There was definitely something to please every era of Skinny Puppy fan this time out and almost every album was represented with the exception of Mind: The Perpetual Intercourse which I don’t recall anything from that one being played this time. 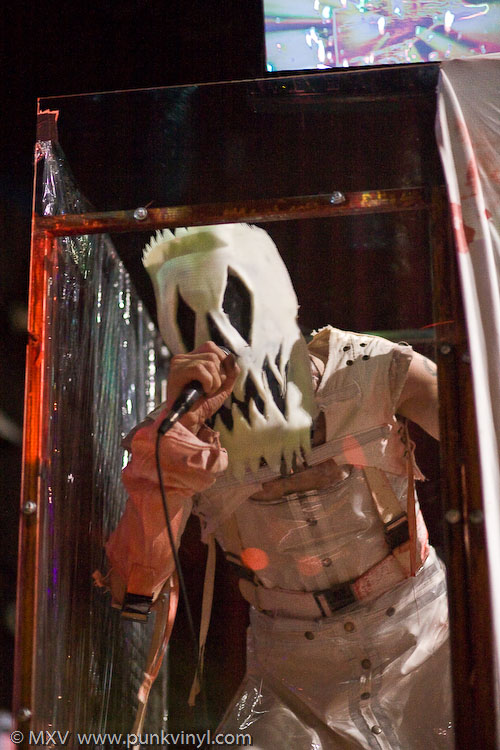 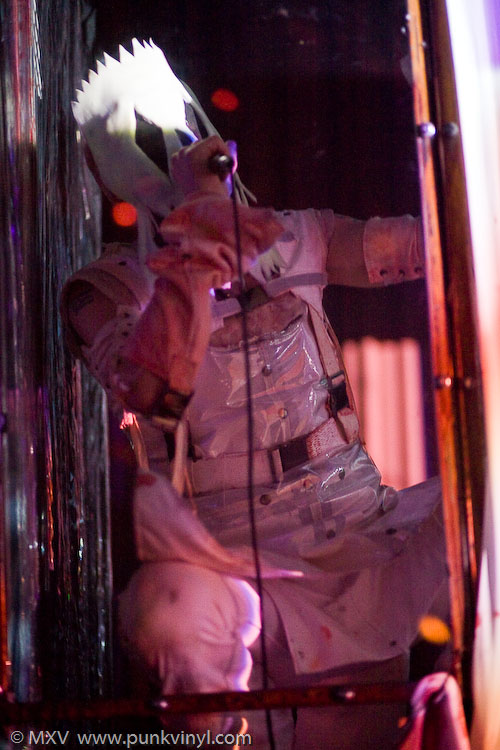 Their main set lasted around 70 minutes and ended with the classic, “Assimilate” which if memory serves they haven’t played live since 1988! During this Ogre’s costume changed yet again and he had a had that emitted smoke from the top on! They came out for a two song encore which was far different than the encores they’ve done in the past few tours, including adding some live improv between songs (known to diehard Skinny Puppy fans as a Brap). When they left the stage and the lights came on I was bummed that they didn’t come out again for another one, but still left completely satisfied as I believe this was the best Skinny Puppy show I’ve seen since they reformed earlier this decade. 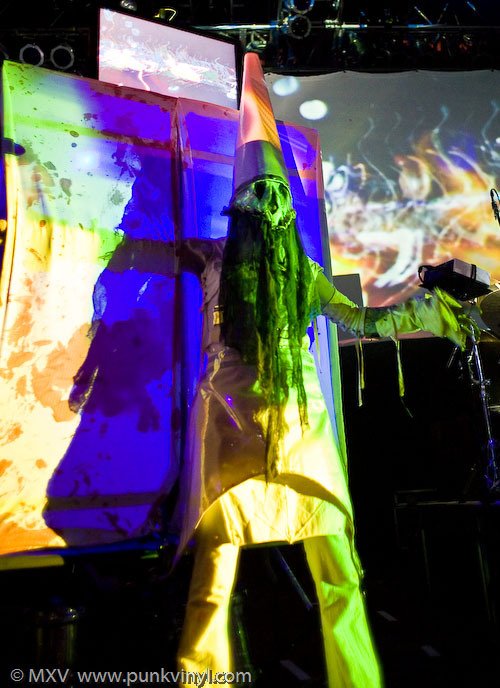 The In Solvent See show was quite the spectacle and further proof the band I consider the best in the world not only still has it, but are stronger than they have been this decade. If you get a chance to catch a show on the remainder of this tour don’t hesitate to do so, it will be the best show you’ve seen this year hands down.

Some additional photos can be seen in the slide show here.