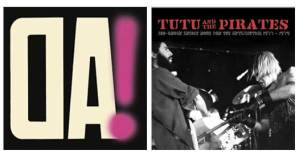 Hot on the heels of their release of the DVD/LP of the Chicago punk rock documentary, You Weren’t There, Factory 25 is releasing two albums of vintage Chicago punk on vinyl for this year’s Record Store Day!

DA’s Exclamation Point and Tutu & The Pirates’ Sub-Urban Insult Rock For The Anti-Lectual are the first two records in the You Weren’t There: A History of Chicago Punk 1977-84 LP series, inspired by the film of the same name. You Weren’t There is a rare glimpse into a truly one-of-a-kind American underground music scene that documents the impact that the Punk movement has had on the Windy City. Though overlooked in the annals of rock history, Chicago served as an important early supporter of this burgeoning and controversial scene that could be violent and unsavory at times, but always tempered with large doses of humor, art, and intelligence.

Tutu & The Pirates, Chicago’s first anti-lectual sub-urban insult rock band and perhaps even its first punk band finally gets its due in their first 17-track LP compilation of demos (from ’77/’78), practice tapes and live material (from ’78). Formed in 1977 by a cross-section of childhood friends and misfits, the Pirates culled inspiration from The Stooges, MC5, and the New York Dolls, as well as 60’s garage and the Mothers Of Invention. Quirky and fearless, these guys quickly become Chicago’s go-to opening band for The Ramones, the Undertones, and The Pretenders. Despite their influence in and on the Chicago punk scene, the legendary Midwestern pioneers of punk never managed to release an album until now.

An important and influential fixture on the early Chicago (post) Punk scene, DA had its feet planted firmly in the moment while focused on a future yet to come. DA, while influenced by psych, punk and noise, created a body of work startling in its depth and originality. The inventive rhythms of original drummer Dawn Fisher and the muscular backbeats of her successor, Robert Furem layed a propulsive framework for the intertwined guitar work of Gaylene Goudreau and David Thomas. The angular fluidity of their interplay became the perfect backdrop for singer and bassist Lorna Donley’s introspective lyricis and expressive voice. Personal and obsessive, strange yet familiar, the music of DA is ripe for re-discovery.

Record Store Day is Saturday April 17th and many record stores will have a number of exclusive limited edition releases that will be released in conjunction with it.