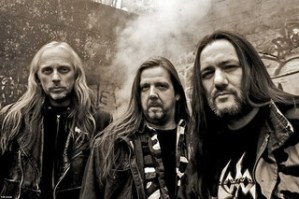 Due to Visa problems, German thrash legends Sodom have been forced to cancel their upcoming U.S.dates.  The dates affected include May 26th in Hollywood, CA, May 28th in New York, NY, and their appearance at Maryland Deathfest scheduled for May 29th.

The band has issued a statement about their cancelled tour:

Due to solid problems with our local tour promoter and getting our Visa in time, we are forced to cancel the upcoming shows. We already had our suitcases packed and were ready to go. We are awfully sorry to take these steps, but everybody acquainted with the entering provisions of the USA knows what we’re talking about. We are deeply disappointed by this situation, but in the end there’s the awareness, that not everything is done to our entire satisfaction. We are “only” the musicians, who would have loved to rock the USA again. We owe this to our fans, even more because we made ourselves scarce in the US since the foundation of this band, of course through no fault of our own. The one who botched this up will have to be confronted with the local organizers and club owners and account for his faults. We surely will catch up on these shows as soon as possible, which we especially owe to our fans. In the end, this set of problems redounds upon us, because we’re in the front line and have to be answerable to our fans. I hope we didn’t lose too many fans due to this mess, but all people who know us are aware of the fact, that we would do anything for our fans. The risk of being forbidden to enter the USA for 10 years or even getting arrested is too high. We hope for your understanding and keep you informed about the latest facts.

The band plans to enter the studio soon to record a new album slated for release later this year on SPV/Steamhammer Records.