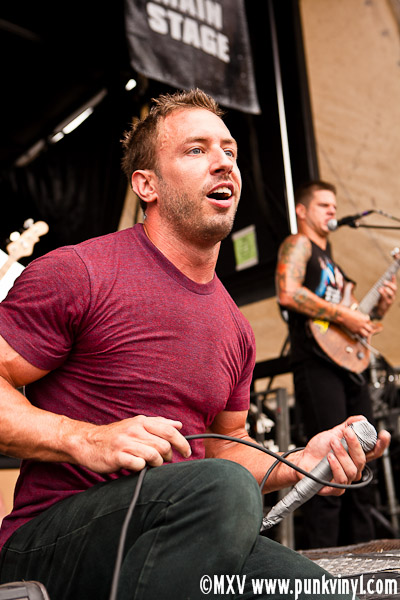 The crew at the First Midwest Bank Amphitheater must have been putting in a lot of overtime last weekend because the very next day after hosting the Rockstar Mayhem Festival, they held the annual Vans Warped Tour. It must have taken a huge crew to tear down the first show, clean up and then set up for this show!

Summertime always means the return of the Vans Warped Tour, which has been going on now for well over a decade and every year it attracts a lot of kids and even older folks depending on who is playing on any given year and this year was no different. Thankfully the rain from the previous night subsided before the show started and people came in droves to the show this year. In fact even 90 minutes after the doors opened traffic was backed up for miles with people driving to the Warped Tour.

As usual at least five stages were set up and full of bands playing nearly non-stop. Unless you can replicate yourself, it is impossible to see everything so one has to form a strategy of what they want to see based on the luck of the draw as to who plays when on any given day as the order of bands are picked at random each morning. If you opt out of watching a full set from the bands, you can absorb a lot of bands in a full day if you are willing to do a lot of walking back around to the various stages as the complex they set up is quite large.

Anarbor, a band not from the similarly named but spelled differently town from MI, had one of the earlier slots of the day. They were your standard fare punky pop band which has become a large staple of the label they reside on, Hopeless Records. As you can imagine they were over in a pretty big way with the youngsters in the audience, especially the girls and had a pretty good crowd gathered watching them.

Not too long after over on the other side of the complex, Every Time I Die made another return to a Warped Tour stage. They have gone through more bass players than Spinal Tap has drummers but nothing slows them down. They played a great set of technical metal hardcore and the crowd who gathered to see them were way into them. They were one of the heavier and most appealing bands of this year’s tour and sound even better live than on their records.

Every Time I Die

Long time technical math metalcore band, The Dillinger Escape Plan, took the same stage a bit later. These guys take intensity to new heights and have been doing so for years now. These guys have carved out a style of music all their own and have aged well like fine wine. They were non-stop adrenalin from the opening chord until the ending one and their one guitarist never stopped running around and jumping on things. They probably burn about 1000 calories every time they play at a minimum. It was a pretty awe-inspiring set to say the least.

One of only two bands that could be considered “older punk bands” but in the big picture really aren’t since neither are classic punk bands, took one of the stages in the pavilion and that was Pennywise. Those old-timers hoping for an older band had to settle for these guys and Face to Face as their only options of something close to old punk. This is the first tour Pennywise has done with their new singer and he seems to fit in nicely. They played a bunch of songs spanning their career and there were a lot of fans of the band watching and showing their approval in various ways including crowd surfing. It’s hard for a band to replace a singer and carry on the same, but these guys seem to be doing a pretty good job of it.

Party-rocker Andrew WK was one of the bigger acts on this year’s tour. He had a full band with him along with a female dancer/backup singer. His set was very high-energy and fast-paced. While the music is a tad formulaic, there’s no denying the man puts on a very entertaining live show that leaves the crowd smiling. He is to the modern-day as the Beastie Boys were to the mid 1980s when Licensed to Ill Came out. Party music for party people.

Check back later for part two and check out some additional photos here.