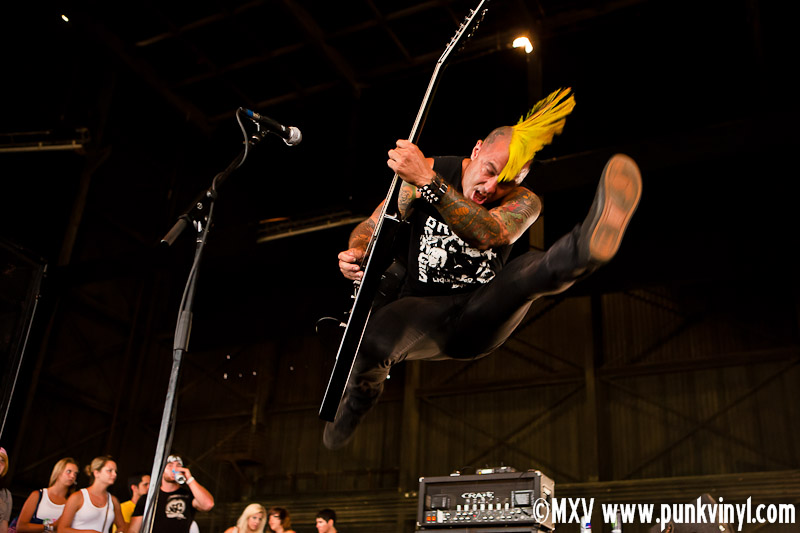 As the afternoon progressed out there in Tinley Park, Pierce the Veil played on one of the stages and attracted a large group of teens and pre-teen boys and mostly girls. They played some rather weak emo-pop that would fit in on the soundtrack to any show on the CW network. It’s bands like these that draw the line in generations of music fans as there wasn’t a person watching that band over the age of about 18. The kids watching however were eating up their sugary pop songs disguised with tattoos like candy.

The other closest thing to an old punk band, Face to Face, made their big return to the scene after breaking up some years ago. While they didn’t attract as huge of a crowd as they deserved, the decent sized crowd that did show up at that stage were treated to a solid set. The band played a good selection of their hard-edge pop punk classics and it was kind of comforting to have them back.

Over at the Skull Candy stage, AM Taxi played as the sun started peeking through the cloud cover. They were a hard-edged melodic rock band with a slight hint of a 70’s punk influence in there. They had a really accessible and radio-friendly sound that appealed to the younger demographic. Those looking for something harder edged would have to seek it out at another one of the many stages.

Alesana returned to Warped Tour yet again and delivered much of the same as they have in the past. They are one of those emo/screamo bands where they have the guy who yells and shrieks, and the guy who croons and it made the little girls swoon as there was tons of young ladies and gents in the audience and aside from the photographers in the photo pit up front, there wasn’t anyone in the crowd watching that was of legal drinking age. The band talked a lot between songs and seemed to be fun for those that were into them, which was an awful lot of people!

The most punk rock band on the Warped Tour, The Casualties, took the stage next to where Alesana played. They have a classic punk rock style and sound full of energy and venom. Their guitar and bass player ran around a lot and the guitar player jumped around a lot too as the singer growled out his vocals and pumped his fist a lot. It was nice to have an authentic modern punk band on hand for the day’s festivities and these guys have been around awhile now and never fail to deliver a solid performance.

Want to know who the best and heaviest band of the day was? Check back for the final installment. Additional photos from this set are available here.