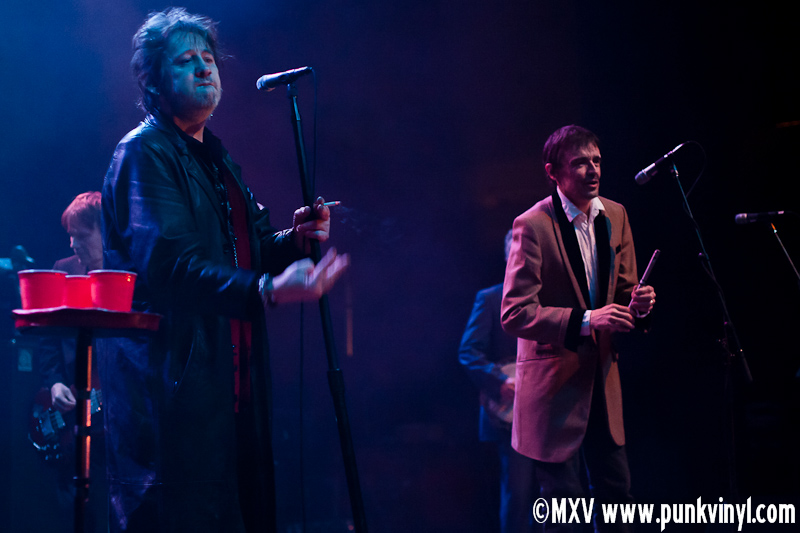 The Pogues 3/3 at Congress Theater

Last Thursday night the Congress Theater was the place to be if you liked to drink and you wanted to see The Pogues farewell tour. All the original members of the band got together for a big sendoff tour of the United States.

A small group of eager fans got to the club and camped out in the front of the stage and took turns buying each other beers and they patiently awaited their alcohol fueled heroes to take the stage and patience was something that there seemed to be an abundance of this evening as the crowd’s patience would be put to the test waiting for the show to start.

Titus Andronicus took the stage about a half hour late and got things started. They had a varied sound that sometimes sounded like Dinosaur Jr and sometimes sounded like Irish punk rock. They were a pretty entertaining band and seemed to have a good amount of fans grouped over on one side of the crowd who were dancing the entire time they were playing and singing along with a few of the songs. Their 45 minute set seemed to go by rather quickly and they got a really warm response from the crowd.

The Pogues were originally scheduled to go on around 9pm but they didn’t take the stage until 10pm. By this time the crowd was the most drunk I have ever seen a crowd ever. Not only that, but despite being completely blitzed, the crowd were completely patient! It was seriously the most mellow and patient crowd ever. When the band finally took the stage, they apologized for being late, picked up their instruments and got to work. There was something like seven or eight people in the band which consisted of all the original members of The Pogues with Shane McGowan being the last one to walk out on the stage, with beers and lit cigarette in hand.

The band sported all kinds of instruments including things like flutes and other non-traditional for rock items. They played their Irish folky rock music with precision and the crowd was dancing (actual dancing, not human bumper cars) and drinking and singing along. The whole show was like St. Patrick’s Day without the green beer and douchebags. The most hammered crowd in Chicago history continued to increase the collective blood alcohol level into quadruple digits as The Pogues focused on songs from their first few albums and delivered a show that was a worthy send-off and seemed to have more than made up for their tardiness that evening.