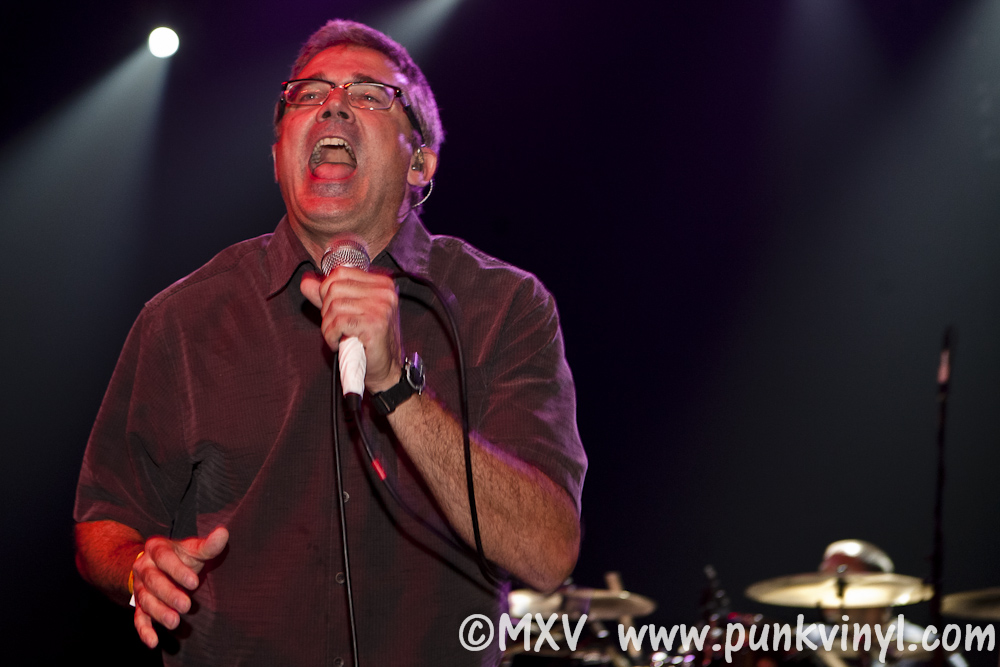 Saturday was the longest day of Riot Fest as the show was an all day affair at the Congress Theater. More than a dozen bands took the stage that day so those who were ambitious could spend the entire day there starting shortly after lunch time. Those who were out late every night that week however likely opted to sleep in and show up later when some bands they were more interested in were playing, all of it leading up to the long-awaited return of the Descendents which was the biggest and most exciting event of this year’s Riot Fest.

The Menzingers played late in the afternoon. They played melodic, fast, punk rock with loud guitars. They put on a decent show but overall they came off as a bit nondescript. They didn’t have much of a wow factor to distinguish themselves from the pack. They played a half hour set.

Flatfoot 56 quickly followed and the crowd had filled up quite a bit around this time as well. They put on a super energetic show where they mix punk and hardcore with some Irish drinking style elements including bagpipes. Their religious beliefs aside, Flatfoot 56 is an entertaining band and always put on a fun show and it’s hard not to like them after seeing them play live.

Strike Anywhere were up next and they were easily the best band of the day that wasn’t named the Descendents. They came out full speed from the word “go” and played really crunchy punk rock with melodic hooks. Their songs were energetic and infectious and the band gave 110 percent to their performance and it showed as they were infinitely better live than they were on any of their well-loved records. This is an act that really shines as a live band and they put on a performance worthy of a higher slot on the day’s bill.

The crowd doubled in size at this point as Leftover Crack was getting ready to take the stage. When they came out the front half of the audience, which was comprised of mostly younger kids, went crazy. Why the kids are so enamored with this band will go down as one of life’s greatest mysteries. It isn’t clear what the appeal is. The band plays a mix of mid-tempo punk with ska and hardcore influences and has a singer with a really grating voice. If there ever was a “punk” band that was the line in the sand separating generations of old and new then Leftover Crack is it and anyone over the age of about 25 probably will never “get it”.

The Suicide Machines followed and opened their set with a cover of Black Flag’s, “Wasted” which will go down in history as being the single worst decision ever made by a band that ever played a Riot Fest. Ever! How a band who clearly had a ton of eager fans in the audience felt the need to soil an old punk rock song to try to win favor with the crowd is a puzzle that has no solution. The kids went crazy for the band’s own songs and the singer spent the entire set down inside the barricade singing right next to the fans which kept the security guards extra busy between protecting him and catching flying bodies. Half way through their set just in case anyone forgot their opening act of blasphemy, the band proceeded to soil another Black Flag song! This time they besmirched “Nervous Breakdown” which is not only something no punk band should do ever, but it isn’t even an original choice of cover song as about a half million newer punk bands have gone for a cheap pop at shows by covering that one. Someone should have fined these guys whatever their payment was for playing this show and forced them to apologize to Strike Anywhere for playing in the slot that they should have occupied instead.

The soiling of Black Flag songs didn’t scare off anyone in the audience as the Congress Theater at this point was so packed full that movement wasn’t an option for anyone. People were packed to the walls and practically the ceiling and everyone had one thing on their mind and that was seeing the Descendents. This was a band that no one thought they’d get to see here again and that hadn’t played a show in Chicago in 14 years which was the first show they had played here in a decade before that! This was easily one of the best scores in Riot Fest history and expectations in the crowd were extremely high.

The band came out on stage and within about 30 seconds proved that time has stood still for them. They not only looked almost the same that they did the last time they were playing in Chicago but they sounded the same that they did 25 years ago. They put on a clinic of how a legendary band should play and that is to play flawlessly. For as great a showing as the three people playing instruments put on with the All sets, they completely eclipsed it with this set. The band belted out song after song and barely stopped to catch their breath.

The band played like they were still in their early twenties and had unbelievable stamina. They covered all the major records and songs you would hope to hear including “Everything Sucks”, “I’m Not a Loser”, “Clean Sheets”, “Coolidge”, “Catalina(!!!!!)”, “Suburban Home”, “I Don’t Want to Grow Up” and dozens more. It really was a set of the band’s greatest hits and then some and it is pretty doubtful anyone’s favorite Descendents song was left out unless that song happened to be “Jean is Dead”. Milo sounded perfect and put on an academy award worth vocal performance as did the band with their playing. The crowd never sat still for a second and the entire security force was trying to keep up with all the flying bodies and keep everyone from getting hurt. It was pure insanity and people of all ages bonded in their love and appreciation of a band that is easily the most influential on what became modern pop/punk.

When the band cleared the stage for the final time they had played about an hour and a half and gave the audience about ten times their money’s worth, leaving everyone totally happy and blown away by a very special performance by one of the best band that the early punk scene ever had to offer. This was easily the high point of this year’s Riot Fest and was a show people will likely talk about how good the band was for years.