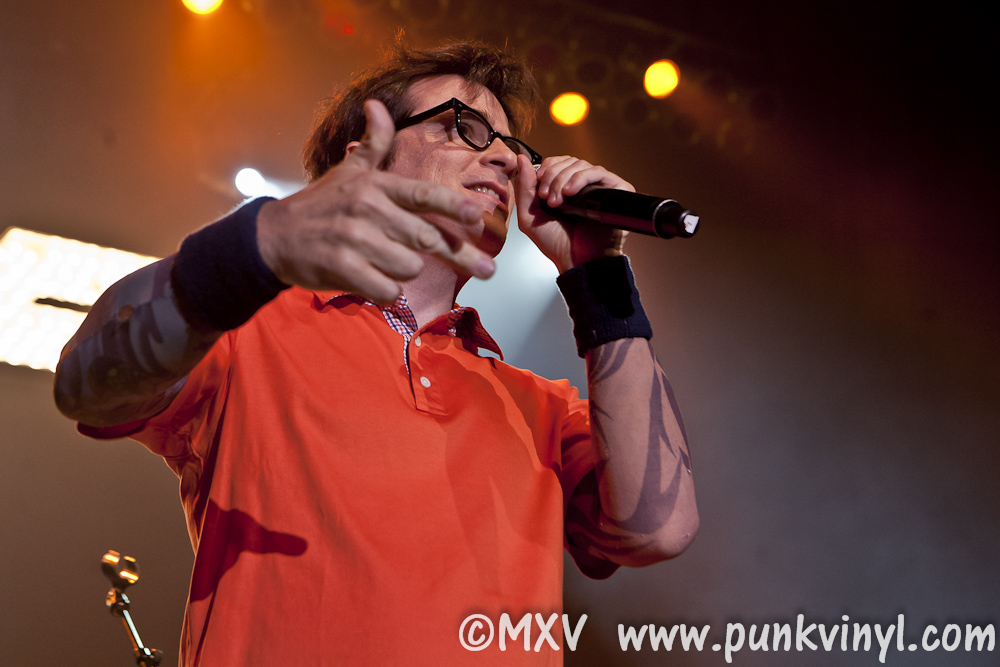 Sunday marked the last night of Riot Fest which was an action packed and exhausting week where memories are made and sometimes reunions both in bands and friends take place. This year the closing of Riot Fest saw a rather unorthodox show by Riot Fest standards by having Weezer headline the last night of Congress shows. That didn’t stop people from filling the place though as the place was packed and it was packed with a crowd different from the usual Riot Fest regulars that had been filing the venue the previous nights.

First up was White Mystery. They were a two-piece band featuring a female singer/guitar player and a male drummer who just so happen to be brother and sister. They were like the reverse image of the White Stripes except they are legit siblings. They played stripped down garage rock that was upbeat and fun.

Teenage Bottlerocket played second and they actually stood out on the bill as being the only punk rock band which was an odd fit considering the other bands they were playing with. That didn’t stop them from putting on an energetic set of pop punk songs with punchy guitars. They had a lot of fast catchy songs that were probably lost on the mostly young crowd of Weezer fans but nonetheless they delivered the goods. It was just a shame they weren’t playing the night before where they’d be in front of an equally huge but far more appreciative crowd.

Urge Overkill quickly followed. These guys were a staple of the Chicago music scene in the 1990’s and recently begun playing again after being broken up for a number of years. They played a pretty straight up rock show that was heavy on new material. They played well though seemed to lack any kind of enthusiasm which may be attributed to the fact that they too were playing mostly to an audience who didn’t know who they were and only wanted to hear Weezer. They still sounded good but it was a shame they didn’t visit some songs from their back catalog more, especially the Touch and Go years.

After a long setup process/sound check and after even more people squeezed themselves into the venue, Rivers Cuomo of Weezer came out on stage kicking a soccer ball around. He then took a mic and made a dedication to their friend and former bass player, Mikey Welsh, who had passed away the night before. The rest of the band came out on stage and the band started their show with “Troublemaker” and quickly followed it up with “El Scorcho” and their best song, “Hash Pipe” (which also happens to be their heaviest). The crowd was amped up big time and were singing along to all the “hits” or just every song they knew the words for. They weren’t just singing along to the choruses either, they were singing the entire songs. At any point Rivers could have just stopped singing and let the crowd do the work for him and they probably wouldn’t have noticed.

The band played a variety of songs including that weren’t relegated to just their popular songs, they even threw in some random songs including one that was a b-side to a single. The crowd ate it all up like candy. The band played flawlessly which certainly must have made the audience feel good about their ticket purchases. After about 45 minutes of various material the band announced they were taking a brief intermission and would be back shortly to play Blue.

After about 20 minutes they returned to the stage which the backdrop was now a blue panel with their band name on it to replicate the cover of the Blue Album (where the band playing in front of this backdrop became the images of the members). They then proceeded to play that entire album in order. The crowd was extra loud with their singing along of pretty much the entire album and everyone in the audience seemed to be really enjoying themselves by singing and dancing, and the older folks were drinking. When the band finished they had clocked in about 90 minutes of playing time on stage that seemed to satisfy everyone and that closed the Riot Fest activities for the Congress Theater. There was just one Riot Fest event left in the form of the final secret show which while of little interest to most of the Weezer crowd, was of a lot more interest to those that were at the other punk shows of the fest.