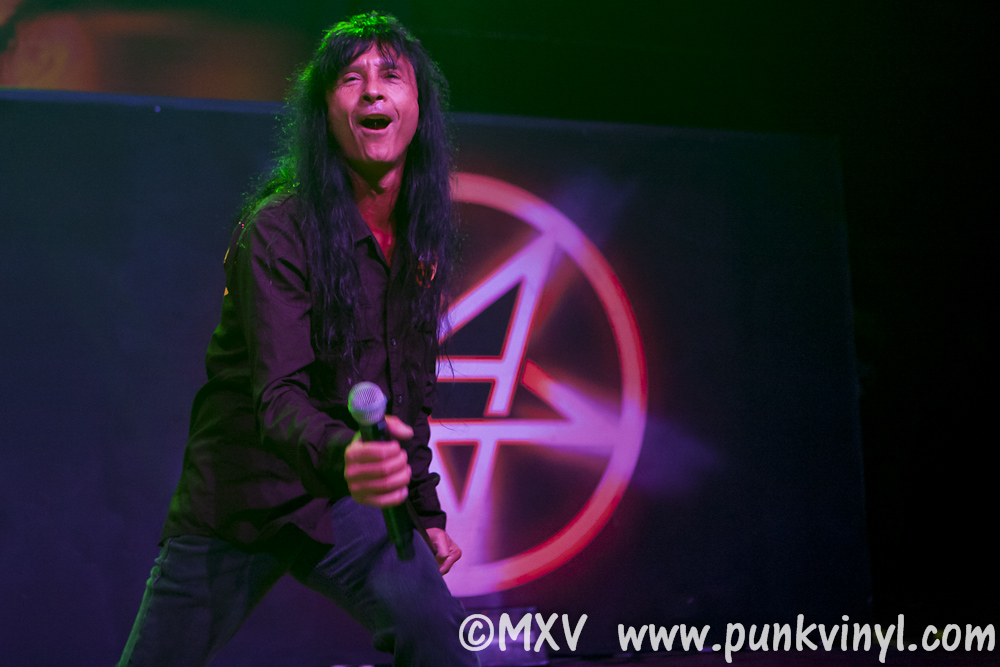 Saturday night the Congress Theater presented a metal trifecta that would make any late 1980’s metal fan drool and that was the return of Anthrax along with Testament and Death Angel. All three of these bands were held in very high regard during the late 1980s when thrash metal reigned supreme and Anthrax were one of the biggest metal bands of the time (along with Metallica, Megadeth and Slayer). This show was like a metal time machines except that the bands are all still active and releasing new material.

Death Angel took the stage first. They reformed the band in the past decade and recently released an album of new material. They sounded as tight and polished as ever and their brand of mostly thrash metal sounded great. The band really put on a top-notch performance that covered material from their entire career. The new songs sounded a lot like the classic Death Angel songs proving that the band still has the tools to deliver the goods and don’t have to exist solely on the strength of their back catalog. The only complaint that one could give would be that they didn’t get to play longer. Another 15 minutes would have served them well but one can say it’s better to leave the crowd wanting more than to wear out your welcome.  They certainly left everyone wanting more.

After an impressively speedy set change, Testament took the stage to a big round of applause. They set the bar high last year with their performance opening up for Slayer and Megadeth and they easily topped that performance Saturday night with an hour’s worth of songs spanning most of their lengthy career. They had killer, crunchy riffs played at top speeds and their singer bellowed from the deepest part of his soul. The band stalked all over the stage and nobody on that stage stood in one place very often as the guitarists took turns standing in the spotlight during their various solos and the singer made use of every square inch of stage as he stomped around playing the air guitar on his light-up half-mic stand when he wasn’t singing. There was a sizable circle pit in the middle of the audience for their entire set.

After a rather long delay in changing the stage and doing a sound check, Anthrax finally took the stage to an excited crowd. The band has been playing musical chairs with their singers for a number of years now and the result of their latest round found Joey Belladonna back in the lead vocal slot. Joey was the singer on all their classic albums that everyone grew up with and was without question the best of the many various singers the band has employed. It was really a treat to have this “classic” version of Anthrax back together and playing live again.

The stage was decked out with imagery from their new album, Worship Music, and the band came out and played two songs from that album back to back, “Earth On Hell” and “Fight “Em Til You Can’t”. The songs were a bit slower than their older material but not by much and these were clearly some of the stronger songs on the new record. The crowd seemed to be warming up rather quickly to the new songs and gave back a positive response. Knowing the crowd wanted some familiars quickly, the band pulled out some heavy artillery with “Caught in a Mosh” that whipped the crowd up into a frenzy. There was a big circle pit and those not partaking of the senseless human bumper cars were dancing around, banging their heads, pumping fists, throwing up the horns and singing along to the choruses. If one closed their eyes it was almost like being transported back to 1987 with the exception being Joey’s voice not hitting the high notes like he used to. His voice still sounded good but it clearly dropped an octave or two over the past two decades. He is still the best singer that Anthrax ever had even at the lower octaves and it was refreshing to hear the band live with his vocals again.

The band stuck to the classics in the form of “Madhouse” and Antisocial”, the latter getting a huge sing along response from the audience. After that it was back to the new material with two more songs from Worship Music before playing another big hit, “Indians”. In the middle of the song they stopped playing and Scott Ian pulled out a predictable metal cliché by telling the crowd their war dance was sub par and that in the city they played at the night before they had a much bigger one. When they resumed the song the crowd seemed to be moving along enough for the band’s satisfaction. It was akin to a band pleading with the audience for a mosh pit even when there already was one. It was the only low point of an otherwise great set. The song itself was as good as always.

They closed their main set with another new song, “In the End” which was a slower number and was quite melodic and then “Only” which was from one of the John Bush-era albums and was an odd pick seeing as they didn’t have him on this tour. The band came out for an encore that was a stellar trio of old classics: “Among the Living” (a song whose intro still induces chills it is so good), “Metal Thrashing Mad” (one of their oldest songs), and “I Am the Law” which was as big of a finish as you could ask for. The band left the stage and proved to the audience that three decades of playing hasn’t made them tired and that they can easily still deliver the goods.