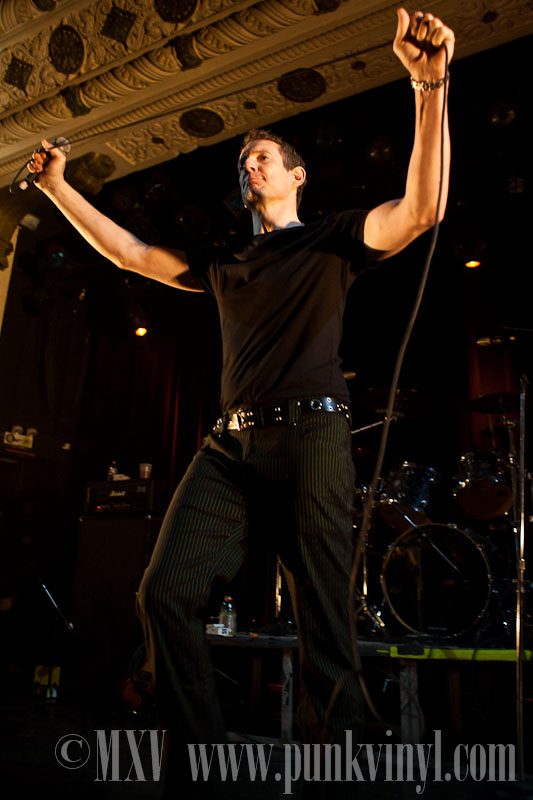 The Thanksgiving holiday weekend got an early start when Chicago punk rock superheroes, Naked Raygun, returned to the Metro. In the 1980s Naked Raygun was a staple of the Metro and their shows were always big events that packed the house. This time was no different as the Metro quickly filled up with people ready for fun.

My Big Beautiful took the stage first. They were a three-piece band that played music that had more in common with 1990s alternative rock than it did with punk rock. They played a pretty solid 30 minute set and they are skillful musicians but they just seemed a little out-of-place opening for a punk rock show such as this. Their singer had a good voice and the guitar player was pretty animated and moved around a lot which made them entertaining to watch despite them not really being a punk rock band.


My Big Beautiful (click any thumbnail to see full images)

Dan Vapid and the Cheats played second. This band is essentially the Methadones seeing as all but one person from that band is in this one. Why they didn’t just keep the name is anyone’s guess considering the music sounds exactly the same. That music would be catchy mid-tempo punk rock that at times sounds almost exactly like the Ramones. They played songs spanning all of Dan Vapid’s career, the highlight being them ending the set with one of the best Sludgeworth songs from their first single.

The Falcon took the stage next with a fancy introduction with an announcer and flashing lights. When they came out and lead singer, Brendan Kelly, started talking it was apparent that the late show and two opening bands playing before them left him way too much time to drink as he was plastered. They played a fairly sloppy set and wasted a lot of time between songs while Brendan slurred words and tried to be entertaining but mostly failing. It was insulting that a band that is held in fairly high regard would be so unprofessional and have a lead singer get that wasted before playing. Their completely unoriginal (yet equally stupid) idea of covering a Misfits song didn’t help their cause either (cause you know, no band has ever thought to soil a Misfits song before by covering it) and their 45+ minute set felt like some sort of  punishment.


The Falcon (click any thumbnail to see full images)

The crowd was more than ready for Naked Raygun to take the stage and by this point many had even started getting impatient. When the band finally took the stage they went against tradition and didn’t open with “Home of the Brave” which they’ve pretty much opened every show with since they reunited. This time out they opened with “Mein Iron Maiden” which is one of their new songs from one of the 7″ singles they’ve put out in the past couple of years. It sounded really good live and it was nice of them to mix things up a bit. They of course followed it up with “Home of the Brave” the band seemed pretty energetic though at times there was a few screw ups in either lyrical delivery or guitar playing. Few seemed to notice however as the crowd went nuts from the start and only got more nuts as the band would bust out the favorites.

Our heroes busted out a Throb Throb classic in “Metastasis” and followed it up with a song they don’t play nearly as often, “The Strip”. Another new song, “Growing Away” which is one of the strongest of their new songs sounded very good this evening and proves that the band still have it in the song-writing department and aren’t just a nostalgia act. A one-two punch of “Surf Combat” and “No Sex” really sent the crowd into a frenzy which continued for the rest of the evening. They pulled out some more unexpected gems like “Entrapment” and “Hips Swinging” and really gave the crowd something to be thankful for when they played “I Lie”.

Between songs Jeff made the usual entertaining small talk and of course they gave out “Free Shit” in the form of turkey key chains that said Naked Raygun on the back along with the date of the show. As usual people nearly killed themselves trying to get them as the band tossed them out which was probably good practice for any black Friday shopping they may have been planning. They eventually ended their hour-plus main set with “I Don’t Know”

The band wasn’t done and neither was the crowd as they demanded more and Naked Raygun gave them what they wanted with a six song encore. This consisted of “Rat Patrol”, “Backlash Jack”, “Home”, “Wonder Beer”, “Cold Bringer”, and concluded with “New Dreams”. When the dust (and beer) settled the band played about an hour and twenty minutes and while it may not have been the tightest Naked Raygun performance, the surprises and quality songs made for the good time that a Naked Raygun show always delivers.