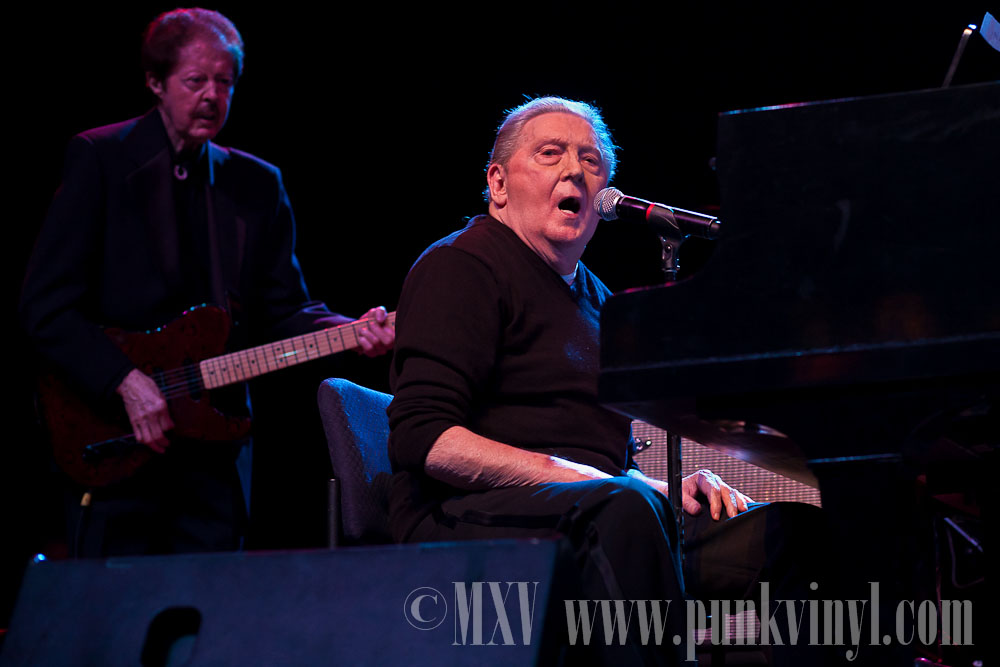 Saturday night a true music legend and one of the oldest living performers in music came to the Congress Theater for a rare appearance. “The Killer” Jerry Lee Lewis returned to Chicago to put on a show for a much older crowd than that venue’s shows typically attract. They even had seats set up in the front half of the main floor for the event.

The doors opened at 6:30 which was probably a relief for the older folks in the crowd (of which there was many), however Jerry didnt’ take the stage until 9pm. This made at least a few people in the crowd irate including one old man who got up, walked near the front of the stage and threw his chair in disgust before walking out. Now that’s hardcore! Thankfully this didn’t incite a slow-moving riot and about ten minutes later Jerry’s band, the Memphis Beat quartet, took the stage and played two songs to get the crowd ready. When they were finished Jerry Lee Lewis walked (very slowly) out on stage and took his seat at the piano. Jerry is 76 years old and it shows, he looked like he could have probably used the aid of a walker as he moved very slow and deliberate. He gave the crowd a wave as he sat down and they responded with a huge round of applause.

When they started playing, most signs of age were erased. Jerry played that piano like the seasoned veteran he is and his hands slid up and down those keys as he flawlessly made music emit from them. His voice sounded great too and if you closed your eyes it was hard to fathom that a 76-year-old man was up there bellowing and tickling the ivories, you’d think it was a much younger man. They played song after song of mostly bluesy, mid to slow tempo songs for about the first 40 minutes after which he started busting out the more rocking hits such as “Roll Over Beethoven,” and of course “Great Balls of Fire”, both of which he sang quite energetically. He closed his hour plus change set with “Whole Lotta Shakin’ Goin’ On” and received a wonderful ovation as he walked off the stage proving that you are never too old to put on a great musical performance and gave the thousands in the audience a special performance they’ll remember for a lifetime.

Check out additional photos from the show here!