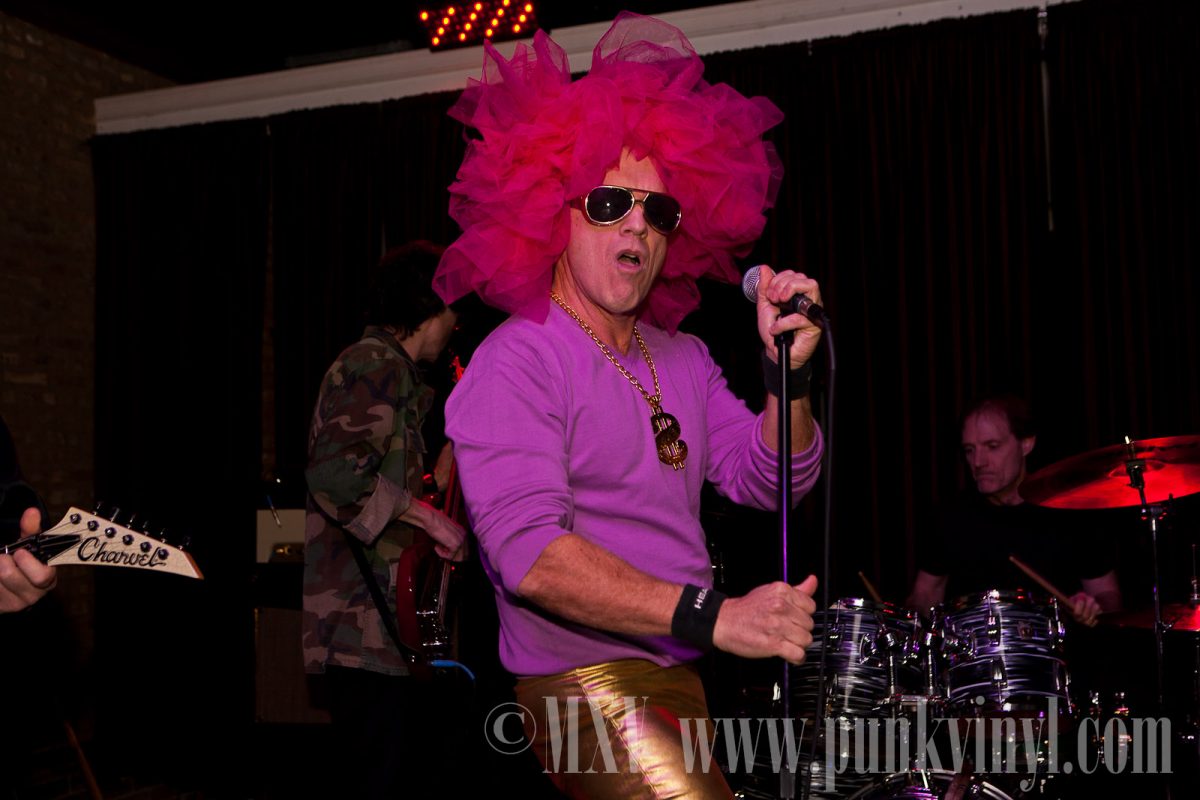 Tutu and the Pirates, The Mentally Ill, Hotlips Messiah 1/27/12 at Ultra Lounge

Friday night the little place called the Ultra Lounge put on a show that mixed two classic Chicago punk rock bands from the early days with two bands of the modern age that resulted in a solid lineup that was worth braving the cold for.

First up was Claw Toe. They mixed up a few styles of early punk and post-punk ala Joy Division with a rawer, dirtier sound. It was cool that their songs sounded so varied both in tempo and influence but all of it had an old-school vibe to it. Aside from the poor choice of doing a cover of the Damned’s, “New Rose”, they put on an enjoyable show and at least when they did the cover they tried to put their own spin on it by slowing it down and making it grungier but they should still ditch that from their set and stick to the original material which was good and showed a lot of promise.

Hotlips Messiah quickly followed. These guys get better every time they put on a show and this time was no exception. Really great 70’s style punk rock with great keyboards and hooks, complete with catchy choruses. The band all had plastic masks on (except for singer Traci Trouble) and were covered in spray-on glitter. Their “mutant rock” punk rock was energetic and fun and they sounded great. This is one of the most under-appreciated bands in Chicago yet they are one of the better bands this city’s punk scene has to offer. If you aren’t familiar with this band or haven’t seen them play then you are really missing out. Their 30+ minute set went by way too quickly.

The Mentally Ill played third. These guys have been around for over 30 years now and have been playing sporadically around town the past few years. They played all their great demented and twisted punk songs with off-kilter guitars that featured really noisy, loud, and abrasive solos and they even played a new song or two! They have aged well though their singer’s voice isn’t nearly as crazy sounding as it was when he was young. During one of their songs they threw out some stuffed dogs. They played a solid 45 minute set that was tight and enjoyable. It’s great that this mostly obscure band from the city is still at it and getting better recognition.

Chicago’s first and most fun punk rock band, Tutu and the Pirates was the final band of the evening. Lead singer, Little Richie Speck, came out in gold pants and a pink afro wig that was made of a bath pouf sponge. It looked pretty ridiculous, especially when you take into account the gold “bling” necklace with the dollar sign on it. Guitarist, Mel Torment, looked like some sort of priest wearing a ski cap and the other three members were dressed pretty normal. The band played most of their usual set of snotty punk n’ roll classics such as “I’ve Got Zits” and “Berlin” and “Anarchy Man” as well as playing some songs that they’ve rarely played live, or never played live before. They even played a new song! During “I Want to Be a Janitor” they did the toilet bass/plunger gimmick to the delight of everyone in the audience. These guys are really a lot of fun and you can’t help but laugh and smile during their performances. They are a rare breed of band that will always put a smile on your face and their snotty punk rock anthems are timeless and never get dull. Hopefully these guys continue to play a couple of times a year as each time they play it usually ends up being the most fun evening of that month whenever they do. They played a 45 minute set that seemed to be done in the blink of an eye. As they say, time flies when you are having fun! It was a perfect closing to a great four-band bill.


Tutu and the Pirates