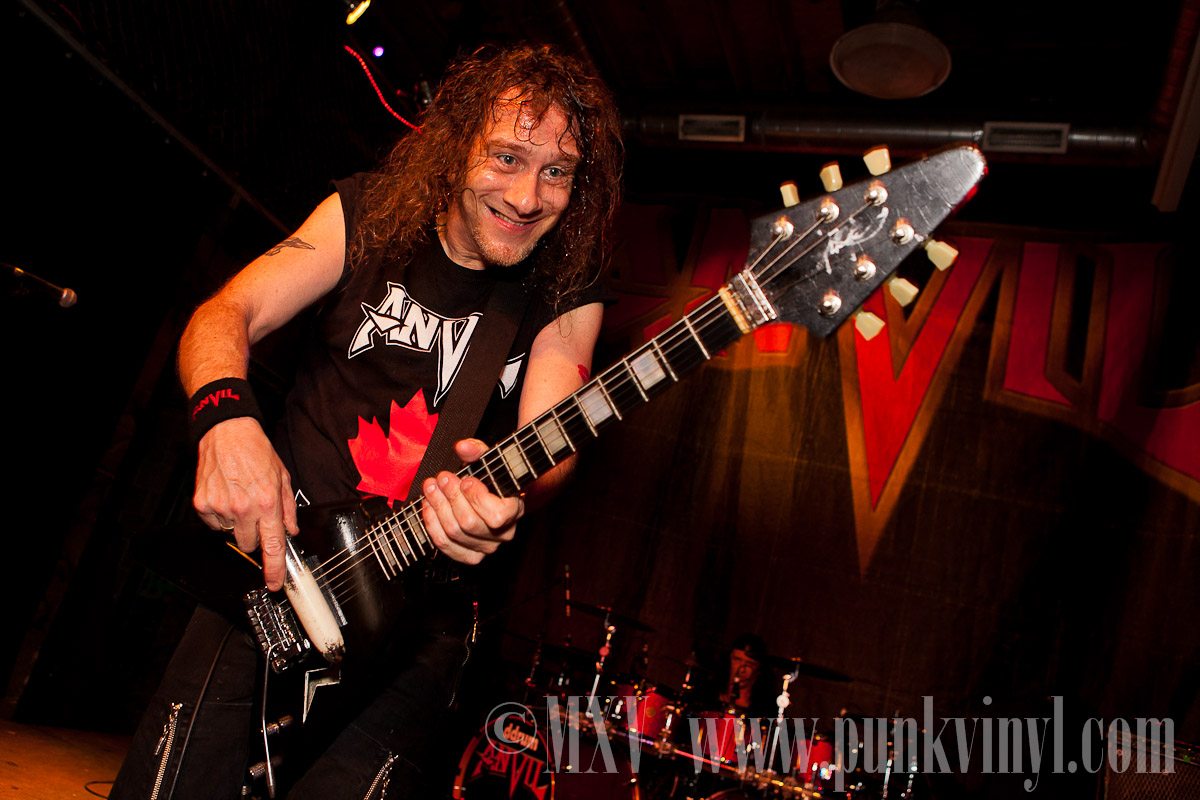 Thursday night, Anvil made a return visit to Reggies over in the South Loop. Last year they put on a really good show at the same venue and for their return visit they were joined by three other bands.

Ironfinger got the show started. They had lengthy songs that had a southern heavy metal sound to them. The lead singer had a raspy, kind of bellowing style. They had a lot of tempo changes in their songs and some of them had more intricate and longer instrumental sections that were interesting. Their bass player occasionally sang as well and he had a better voice than the lead singer. Their set was hit and miss but overall it was entertaining, though a little on the long side.

Beak played second. These guys really upped their game since their last appearance on the Reggies stage. Their post-metal got more intense and complex and these guys have really turned into a great band. The dynamic of having two different people doing vocals works really well and fans of earlier Isis would really like Beak.

Admiral of Black were a ball of energy from start to finish. They played a faster style stoner rock mixed with faster metal like Motorhead. Their singer had a voice very similar to Dave Wyndorf of Monster Magnet. These guys were really tight and totally won over the crowd with their great songs. The only thing that stuck out like a sore thumb was their cover of Motorhead’s, “Ace of Spades” which not only was totally unnecessary but they did nothing to it to make it sound any different. If they were going for playing a nearly exact sounding copy of the song to be included in a Guitar Hero game so the publisher wouldn’t have to license the original song and save money then they nailed it, otherwise they’d be wise to stick to their great original material.\

The club filled up some more right before Anvil started and there was a good handful of eager fans right up in front. The band came out sporting a new bass player, this one with a full head of metal hair. Lips did the gimmick where he speaks into his guitar pickup and then they tore into their opening staple, “March of the Crabs” and followed it up with “666”. The crowd was full of banging heads and happy faces, but none happier than the face of Lips who never stopped smiling through the band’s entire set. It is obvious that the man is happiest when he is up on stage playing music to any sized crowd and his enthusiasm never wanes. He talked a lot between songs and was thankful to all the fans who showed up and would announce the next song and what album it was from.

The band played a set list that almost mirrored their last appearance at Reggies and it was one that included all the old staples mixed up with a handful of tunes from their latest album. The new bass player sure learned all those songs quickly and the band’s sound hasn’t changed a bit with the changing of a member. They played a little over an hour, including Lips pulling out his road-worn vibrator to use on his guitar during the extended, “Mothra,” and culminating with their biggest “hit”, “Metal on Metal” which is always a blast to hear. The band thanked the audience and left the stage having delivered a really fun heavy metal show. Hopefully Anvil makes Chicago a yearly visit as they’ll always have a room full of fans over at Reggies.