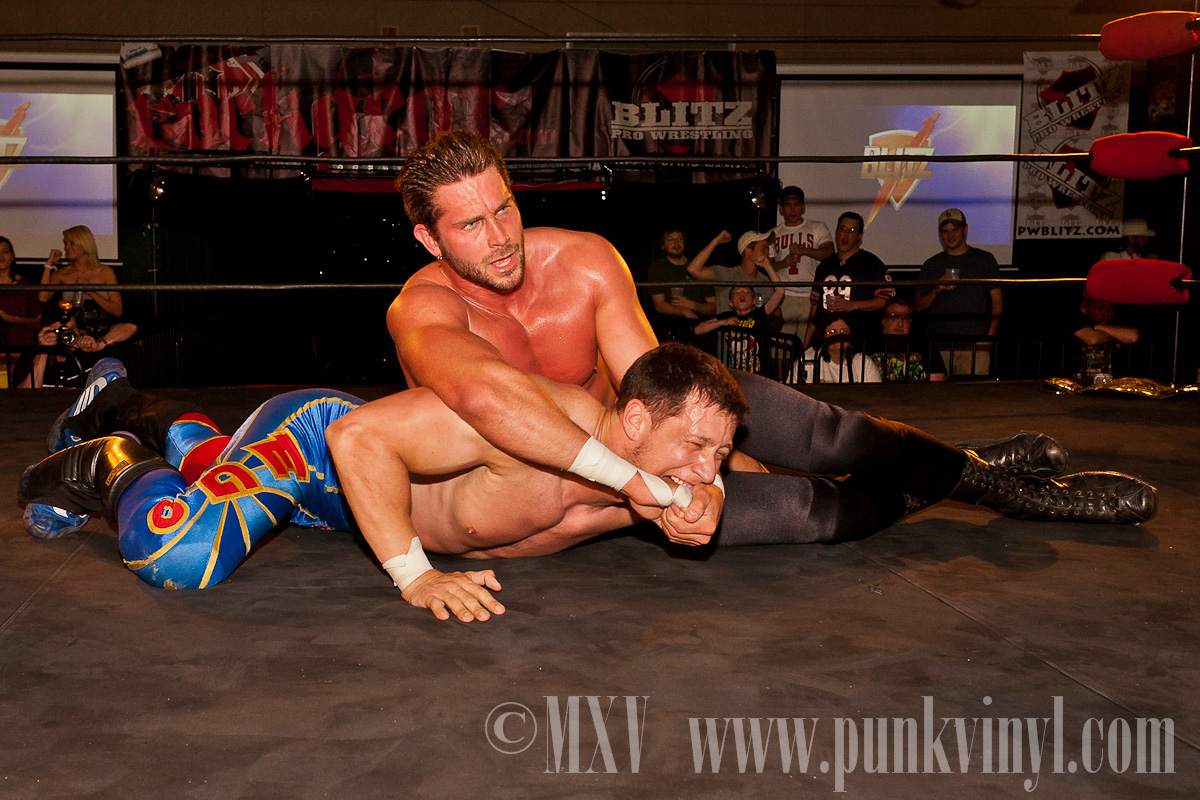 Joliet is a tough town, so it only seems fitting that aside from the prison and the casinos that it would also have pro wrestling. The city did just that this past Saturday when Pro Wrestling Blitz put on their latest event at St. Joseph’s park. The show was scheduled to start at 7:30pm but they did an early bonus match for advance ticket holders (a “dark match” if you will).

In the match, BMK was outmatched by the larger Xavier Mustafa. It was almost comical how much bigger Mustafa was than BMK and it didn’t take long for Mustafa to beat the smaller man down and hit him with a F5 style finisher.

When the show got off to its official start, Jimmy Rockwell with his manager Kurt “Kujo”Joseph defended his No Limits championship against Mike Horning. Rockwell was the heel in this match and it didn’t take long for Kujo to lend a hand by attacking Horning when Rockwell tossed him outside the ring and kept the referee distracted. Horning put up a valiant effort but wasn’t able to defeat Rockwell, especially considering the fact that he was outnumbered. The match lasted about ten minutes and it was a pretty well put-together bout that got the show off to a good start.

After the match, the video screens that flanked the curtain showed a backstage interview with The Ego Robert Anthony where he ran down Ryan Slade (Blitz champion and Ego’s opponent that night) and Tony Scarpone (whom Ego has been feuding with over the years). Ego’s verbal skills are on par with his ring skills and this helped build up additional heat for the show’s main event.

Zach Thompson (who was joined by his manager, Rinaldo Piven) took on Ashton Vuitton in the next bout. Vuitton was the babyface of the match and before the match started Piven did a good job of getting heel heat for both himself and his client. Thompson. The two wrestlers were pretty evenly matched and when Vuitton would get the upper hand, Piven would do his best to interfere to keep him from winning the match. Eventually Ashton took control and looked like he was about to win the match which caused Piven to run in the ring and tackle Ashton and start punching away at him. The referee had no choice but to end the match due to this interference and Ashton won the match by disqualification. Both wrestlers looked really good in this match and once they got they got going it was a very entertaining match. Piven did some of his best work as a heel manager in an old school style during this match which is something that is sorely missed in modern professional wrestling that you see on TV.

In a tag-team match, The All Amercian Scumbags faced Buddy Roberts Jr. and Mike Anthony. The Scumbags had a more brawling style to their team and Roberts/Anthony were more traditional styled wrestlers. There was a lot of double-team action and power moves and despite their speed advantage, Roberts and Anthony lost to the Scumbags, who finished the match with a pretty sick looking powerbomb styled backbreaker.

Next up was Barry Ryte vs. Ruff Crossing. Ruff was the babyface and was pretty over with the crowd. Imagine a cowboy Shawn Michaels and you can get the idea of what his gimmick was like. Early on he was getting the better of Ryte  and they did a couple of funny spots where Ruff made Ryte look foolish. This only ended up pissing off Ryte and though some heelish tactics, Ryte managed to win the match. When the match was over, Ryte took the mic and started cutting down everyone which lead to the special guest of the evening to come out and put a stop to it.

WCW superstar (who also did time in WWE), Diamond Dallas Page, came to the ring and got a huge pop from the crowd when his music started and he walked through the curtain. He came to the ring and got up in Ryte’s face, calling him out on not being anyone. Ryte started cutting down DDP and DDP slapped him for his troubles. Ryte tried to hit DDP but DDP blocked it and hit him with a Diamond Cutter which got a huge reaction from the crowd. Having taken out the trash, DDP took the mic and gave a speech about his latest endeavor, yoga. After explaining to the crowd what his cause is all about, he showed a very moving video about helping people who are extremely overweight get a new lease on life when all other avenues of getting healthy have failed them. Afterwords DDP got out his old WCW world title belt and there was an intermission so fans could get their pictures taken with DDP and get signed photos (for a fee).

When the lengthy intermission was over it was back to the ring for more action after a backstage interview with Tony Scarpone for his reactions to Ego’s comments earlier in the show. This time it was a four-way match with Matty Starr, Justin Reno, Jack Kash, and Chris Hybrid. In the start of the match they split into two and the two pairs of wrestlers did battle until it eventually devolved into everyone beating the crap out of each other. It got messy at times but when they thinned the group at times during the match with guys being laid out, that’s when each wrestler had a chance to shine. The action was fast and furious and if you blinked for more than a second it was easy to miss something. Matty Starr (who was a heel and actually did his best to capitalize off of everyone else’s hard work in the match by taking advantage of guys being worn out) ended up stealing the win which infuriated the crowd, but greatly pleased his manager, Rinaldo Piven. Their celebration was short as Tony Rican came running into the ring in his street clothes to attack Starr who had injured him months before. Rican exploded on him and Starr and Piven fled as Rican challenged them both.

It wasn’t over for Piven yet this evening as on the video screens footage was shown where Ashton Vuitton found him alone and vulnerable outside somewhere on the west coast where the sun was still out and threatened to give him a beat down right then and there but said he wanted him in the ring. This set things up for a match in the future.

Tony Scarpone took on Vic Capri in a one on one match. They started off trying to feel each other out with lockups and a test of strength which Tony had the advantage in being quite taller than Capri. Capri was no slouch either and was quite a powerhouse and the two had a good brawl with a lot of power moves. When it looked as if Scarpone was going to win, Robert Anthony came to the ring and interfered and hit Scarpone with a chair. He then handed money to Capri to help him beat down Scarpone. Capri went to the ring apron and attempted to spring off the ropes and smash a chair on Scarpone’s leg but he slipped off the ropes and hurt his knee. Anthony and Capri then left the ring with Scarpone still laying on the canvas spared a much worse beating thanks to Capri’s slip-up.

In a hardcore tag match, Hardcore Binge did their best to cripple The Church (with manager Billy Whack, former head honcho of the long-defunct LWF). They used ladders, chairs, and everything but the kitchen sink in their quest to give The Church their much deserved comeuppance. There was a ton of high-spots including dumping a guy off a ladder into some chairs on the floor, fighting through the crowd, and a big splash off the ladder. Some people in the audience started chanting “we want blood” and the match was a wild one. After a long and brutal battle, The Church busted open the back doors of the building and fled which left the referee no choice but to award the match a count-out. A Blitz official came to the ring and declared that there would be a cage match at the next show so The Church will have no escape and they can settle this feud once and for all.

In the main event, The Ego Robert Anthony challenged Ryan Slade (with manager Rinaldo Piven) for the Blitz championship. In an odd twist, both wrestlers were heels, but being a proud Canadian made Slade the more hated of the two heels (plus the crowd’s hatred of Piven helped turn on the heat too). The crowd started chanting “USA”. Slade got the upper hand early in the match but never for very long as Ego went toe to toe with him for quite a while. The two were putting on a very well-paced and exciting match and each guy had spots where they really shined. Ego did his best to best Slade but Slade wasn’t going down for the count and kept fighting back. At some point the referee got knocked out and when Slade hit a fisherman’s suplex (aka: the Perfect Plex) on Ego and had him pinned for far longer than three seconds, there was no one there to make the count. Ego was getting his wits about him when Tony Scarpone came running down to the ring with a referee shirt around his neck (the shirt was too small to fit him), grabbed a chair and beat Ego with it, then took a dazed Slade and covered him over Ego and counted three and Slade was declared the winner. It was a very good match that built intensity and both wrestlers looked strong in the match, but its goal was to advance the feud between Ego and Scarpone.

When it was all said and done, Die Hard lasted around four hours and was a good wrestling show with some good wrestlers in there. It was definitely a show worth checking out for wrestling fans and they set up some interesting matches for their next show.