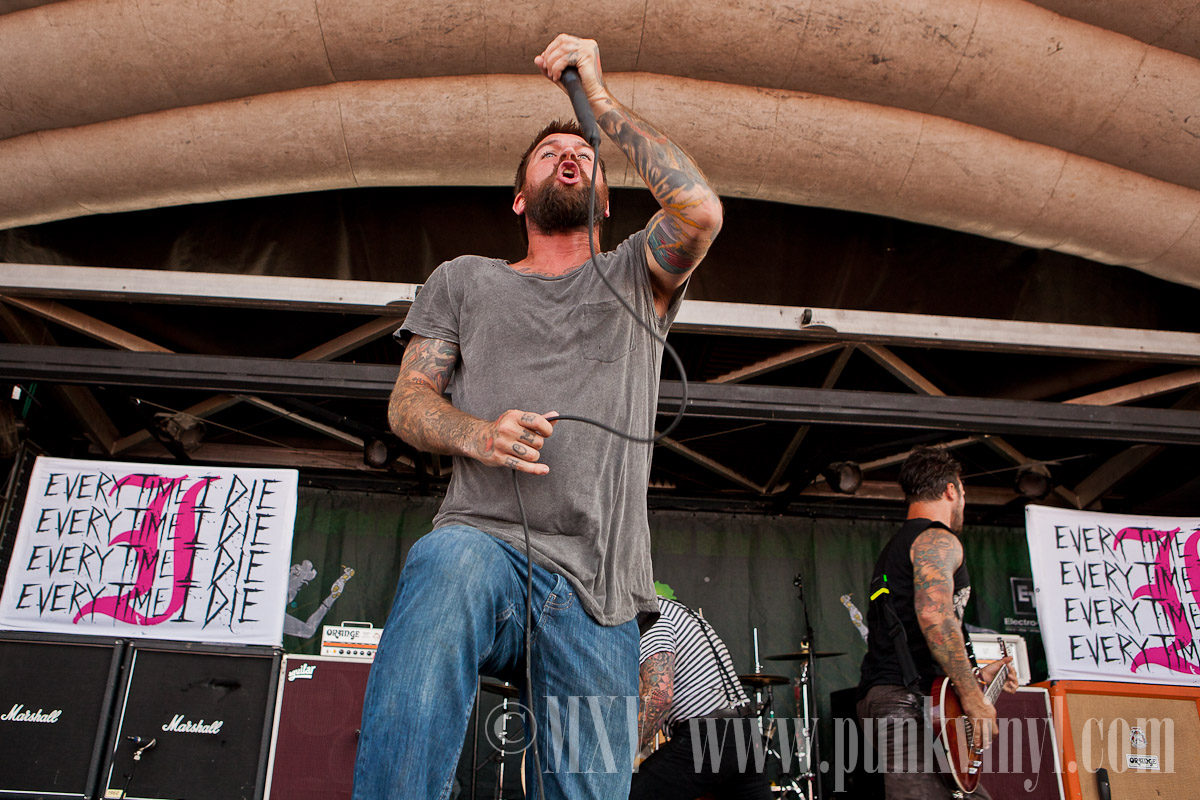 What used to be referred to as the “punk rock summer camp” but in more recent years has branched out a bit more mainstream, the Vans Warped Tour made its annual return to the outskirts of the Windy City this past Saturday. It was a sweltering 100 degrees outside for most of the day but the heat didn’t do anything to attendance as the place was as packed as always as tens of thousands of music fans didn’t let the massive heat wave keep them from having a day of fun.

As usual there was at least a half-dozen stages and a half million bands playing so seeing everything is impossible but there is a little something for mostly everyone unless you are looking for older punk bands. The fest has catered heavily the past few years to bands of the screamo/emo variety with some sprinkling here and there of some metallic hardcore bands. The bands play the same stages every day of the tour but their set time is picked at random so if you go to the tour you could either be able to see every band you are interested in, or be forced to choose between two if their set times happen to overlap that day. Here’s a rundown on some of the day’s action.

Over at the Kia Rio Stage which was in the covered pavilion that had a nice breeze and was ten degrees cooler than anywhere else on the grounds, Pierce the Veil paid a return visit to this year’s tour. They had an enormous crowd waiting for them to start playing and before they came out a group of them grew impatient and started chanting the band’s name in hopes it would get them out on the stage quicker. When they did walk out the crowd screamed (literally, there was a lot of screaming teenage girls in the audience) and once the band started playing, the place went nuts. The heat didn’t slow the kids down any and they soon started climbing all over each other. They had a sort of post-hardcore sound with heavy riffs but then had melodic emo style choruses. The band members had a ton of energy and no one held still for more than a couple of seconds at a time. The crowd ate it up like candy.

On the same stage, Miss May I played next. These guys were a lot heavier than the band that preceded them on that stage. They had a much heavier, metalcore sound with lots of growling vocals. They did still have the melodic chorus thing going, but it was a lot less whiny or accessible, both of which are pluses!

Out in the heat on the Monster Energy Stage, Title Fight took the stage as the heat was at its peak. They drew a really big crowd too who seemed to have no problem standing out in the sun and sweating their asses off. When the band started playing, these kids went nuts and did their best to either kill each other or dehydrate themselves faster by jumping all over the place, playing human bumper cars and crowd surfing, There was an endless stream of bodies being passed over the barricade into the waiting arms of security which was a constant at every stage at the festival. They’d catch the flying bodies and put them down and send them safely out the side back into the chaos. Title Fight had a lot more in common with bands like Jawbreaker and Hot Water Music than they did with many of the bands they were sharing a stage with and as a result were one of the real standouts of the day. They played their punchy melodic punk rock with a lot of energy and a smile.

We are the In Crowd played over at the Tilly’s Stage (one of the two larger outdoor stages). These guys had played the Warped Tour a couple of years ago so they were no strangers to Warped regulars. They played melodic modern pop-punk which was heavy on the pop and light on the punk. They too had a sea of fans in the audience, most of which were still in high school and despite the less aggressive nature of We are the In Crowd’s music, the crowd acted much the same as they do for the heavier bands and some people lost their shoes in the process as evidenced by random shoes being tossed to the security guards.

Back at the Monster Energy Stage was the highlight of the day by a band that is no stranger to a Warped Tour stage in recent times. Every Time I Die played to a huge crowd of crazy folks who did their best to kill each other going nuts as the band played their insanely tight and heavy metallic hardcore. They were fast, intense, and heavy and never turned the intensity level lower than 11. They blew every band away and were the absolute highlight of the show. Simply put, they were beyond awesome.

Over in the pavilion, The Used took the stage to another massive sized crowd, one of the largest of the day. They were mostly a pop/emo style band with some other slight influences. The security guards had trouble keeping up with all the flying bodies while at the same time were spraying the crowd with a garden hose in an effort to keep people cool and keep them from overheating. There was plenty of people singing along with the songs as well the entire set.

A band that has recently come full circle and returned to their original lineup, Taking Back Sunday, played on the Kia Soul Stage to a crowd that went back farther than the eye could see if that eye was up front by the stage. At least a thousand eager fans went crazy for every second of the band’s super enjoyable set. These guys really stood out with a sound unlike the rest of the bands of the day. They were a punchy melodic alternative rock type band with really catchy and interesting songs and didn’t fall for any trappings of the genre. These guys were really impressive and again they played to a crowd of crazy folks who liked to climb all over each other.

All Time Low, who was another Warped Tour veteran played the Kia Rio Stage as the temperature had finally dropped to a more comfortable level. Those who survived the heat of the day thus far were treated to a set full of emo pop songs that the kids loved. Their guitar player had a shirt that said “boner” on the front and he would regularly flip up his guitar to reveal a sign he taped to the back of it that said “tits”, both of which were probably a big hit with those in the crowd just entering puberty.

Yellowcard made the security guards at the Kia Soul Stage really earn their money as during their third song there was a non-stop sea of crowd surfers that never relented. This was caused by the band telling them to crowd surf and the crowd obeying. The band played pop songs with a fiddle player for good measure and it was clear they were one of the most popular bands of the entire day based on the gigantic turnout and the fact that they had doubled the amount of security for their set.

Near the end of the night, Sleeping With Sirens tried to one-up Yellowcard by forcing the security guards at their stage to work just as hard. They followed the modern screamo blueprint and had all the usual ingredients that the current Warped Tour crowd loved. Someone got hurt in the pit during their set but instead of stopping their set completely to allow medics and security to help the kid with zero risk of additional incidents, they played a really mellow a capella song which thankfully the crowd held mostly still for which allowed the injured person to be fished out of the crowd and taken to the medical tent. After that it was back to the regular business of post-hardcore riffs, growling vocals and melodic singing. That and total chaos in the crowd.

As the sun set and the final bands on the remaining stages were finishing their sets, it was time to close the books on yet another Warped Tour. Despite the heat the crowd was a vast array of happy campers in their teens to early twenties. Everyone seemed to have gotten their money’s worth and the event had a huge turnout. The show still is one of the best values for the dollar when it comes to festivals and will likely see nearly everyone who attended this year looking forward to doing it all over again next summer.