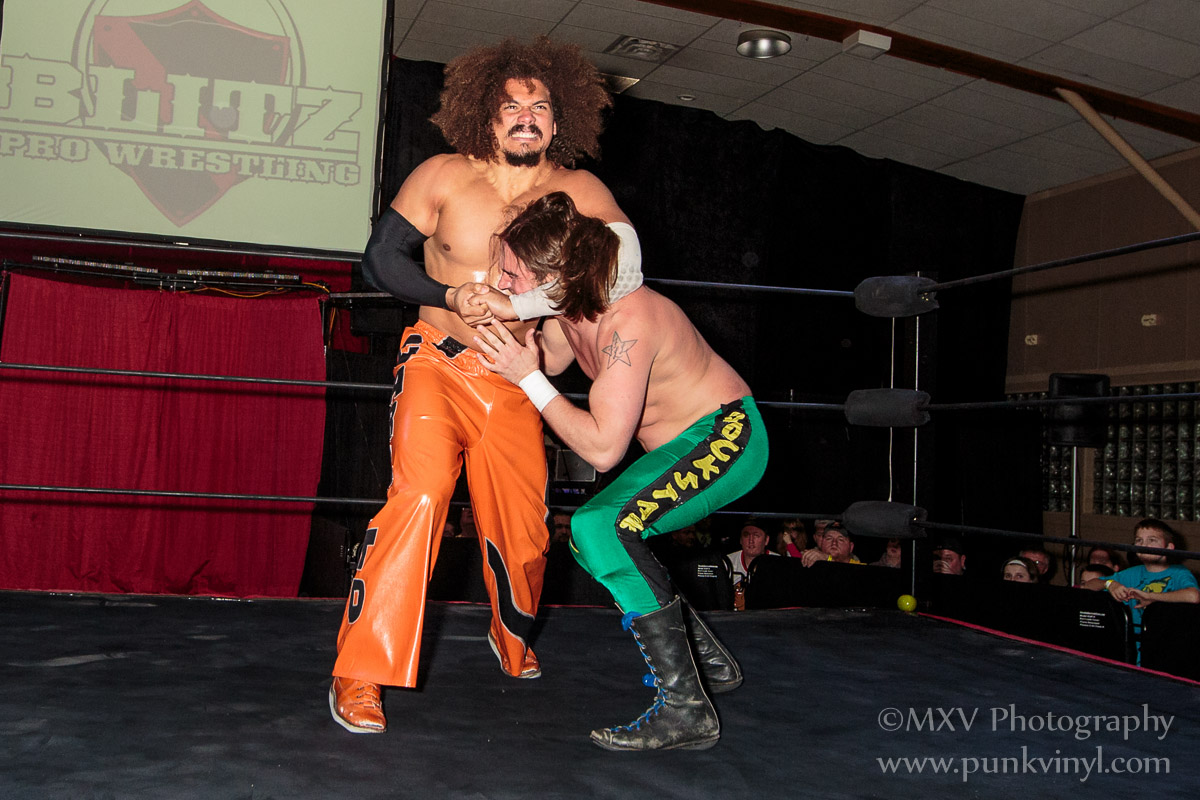 Pro Wrestling Blitz held its monthly show Saturday night at the “Blitz Arena” otherwise known as St. Joseph Park in Joliet, IL. On top of their usual strong lineup of local talent they brought in former WWE superstar Carlito for this show, which was pretty cool.

In the opening bout, Zach Thompson faced Grin. This was an odd matchup in the fact that the fans hate both wrestlers as they are both bad guys. The match was rather short and the two were having a good go at it and while Grin didn’t really look like he was in trouble, Judas decided that he needed to come out to ringside to try to “help” his 3 Rings brother. That help backfired and Grin ended up taking a face full of skull which enabled Zach to get the win. A very pissed off Grin shoved down Magdalena and then was yelling at Judas and the Ringmaster. Judas then positioned himself in front of Magdalena to protect her as Ringmaster ushered Grin to the back. Dissension in the 3 Rings?

Clancy O’Connor fought the unknown Masked Bonanza in the second match. Clancy, who has had a losing streak for quite some time actually won his match and dominated most of it! After the match as Clancy was just exiting the ring, another masked wrestler came out claiming to be the real Masked Bonanza and demanded a match with Clancy. This Masked Bonanza put up a better fight but Clancy beat him too! It was a good night for Clancy and could this be the turning point in his career where he starts to climb the ladder?

Chris Logan and Reese (who is a giant) teamed up against Ryan Slade and Tony Scarpone. Tony and Ryan started strong but some cheating by Logan and Reese coupled with the interference of Matty Starr who came and attacked Ryan outside the ring left Scarpone outnumbered and he ended up losing the match after some double teaming by Reese and Logan.

WWE superstar Carlito made a rare appearance to wrestle Jimmy Rockwell (with Reese in his corner). Carlito started with an early advantage which the cheating Rockwell and Resse soon ended. After Rockwell dealt some punishment of his own, Carlito rallied for a comeback, spit his apple in Rockwell face and hit him with his backstabber finish to get the win and some huge applause from an audience very happy to see him again. During the intermission Carlito was available to take photos with the fans and sign autographs.

In an intergender match for the No Limits title, Matty Starr defended his title against Melanie Cruise. Melanie wrestles like a guy (which is a compliment) and she is also as big as many of them (and not in a manly way) and can totally hold her own against any competitor and proved it in this match once again. At one point during the match Melanie had Matty down for a pin and the referee counted to three but when Mel stood up, the referee saw that Matty’s foot was on the ropes and restarted the match. The distracted Melanie was rolled up for a pin by Matty who grabbed a handful of Melanie’s tights to keep her down and get himself the three count. The referee of course didn’t see that and restart the match so Melanie got ripped off.

In a tag team match, If Looks Could Kill faced Buddy Roberts Jr. and Barry Ryte. From the start there seemed to be a bit of friction between Buddy and Barry when they were arguing about who would start the match. Once the match got started that tension increased and added to by the double team tactics of If Looks Could Kill. They knocked Barry off the apron which cost Buddy a chance to tag himself out when he had been on the receiving end of a long beating and after he made a hot tag to Barry, Barry came in like a ball of fire but then tagged the still weary Buddy back in. The weakened Buddy didn’t have enough left in the tank to kick out after If Looks Could Kill hit a double team finisher on them. After the match a very pissed off Barry left Buddy high and dry and stormed backstage.

Judas and Dynomite Jackson had a fast paced and sometimes high-flying match. It was an exciting bout that spilled out onto the floor more than once. Dynomite Jackson got the win thanks to Grin coming to ringside and knocking Judas out with his own skull to get back at him for costing him his match at the beginning of the show. This can’t end well for The 3 Rings.

Blitz champion Vic Capri put his title on the line against fan favorite, Hardcore Craig. These guys put together a fantastic match that had a lot of brawling and a fair amount of technical wrestling. It also had a lot of great reversals and close calls that had the crowd screaming and yelling the entire match. The match these two put on was a clinic about everything enjoyable able professional wrestling and while Craig may have come up a little short in his quest for that title, the feud continues next month because after getting cheated out of a win at this show, he got Commissioner Brooks to give him a rematch next month in a hardcore match where the fans get to bring the weapons for the wrestlers to use!

Redemption continued the very hot streak that Blitz has been on as of late and the rematch between Craig and Vic should be legendary based on how good their match Saturday night was. It will also be interesting to see what develops from the friction in both the 3 Rings and the Buddy/Barry camps.  Redemption was a good time and everyone involved with the show should be proud of the show they put on.