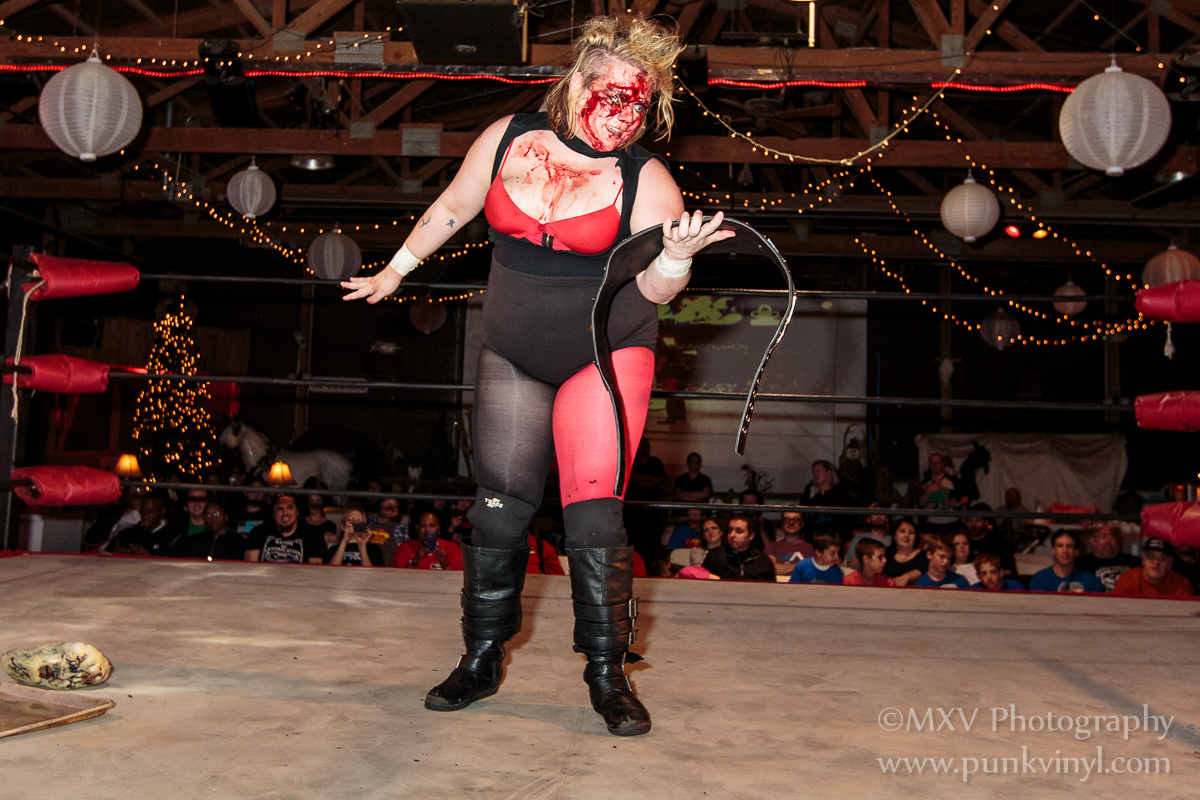 Resistance Pro returned on Friday to Willowbrook for its latest event, Don’t Tread. This show featured some familiar faces as well as some newer ones and featured three title matches. If that wasn’t enough but it also marked the return of one of the company’s top stars.

The show got started with Justin King coming out and talking about his new client, Da Cobra. This led to an angry confrontation with C-Red, who wanted to fight King. Jacques Baron came to the ring to try to calm everyone down and declared that Da Cobra will be fighting in a three-way match with Shawn Blaze and John Skyler and that match would be happening, now!

The match was very fast paced with a lot of trading blows and guys flying in every direction in and out of the ring. All three of these guys busted their asses and the results was an exciting bout from start to finish. Thanks to the distraction of King, Da Cobra was able to steal a win. This match got the night off to an exciting start.

A ladies tag-team match quickly followed that featured Lucy Mendez/Amanda Rodriguez vs. Angel Dust/Samantha Heights. Samantha was taken out of action early in the match with an injured knee which left Angel Dust on her own. She was able to overcome the odds though and fought her way to victory. The match was a little on the long side and could have benefit from shaving five minutes off of it, but the girls worked hard.

It was a long year of waiting for Mr. 450 for his suspension to end. One year ago he had a match with The Ego Robert Anthony where if Mr. 450 lost, he’d be suspended from Resistance Pro for one year. Mr. 450’s suspension finally ended and he was able to get his revenge match with Ego. These two tore the house down fighting all over the crowd, launching each other into the crowd, and beating the living daylights out of each other for about a half an hour. The match didn’t feel that long and the match was easily the match of the night. Mr. 450 got sweet revenge and the win and after the match he gave a little speech about how he respects Ego and that they are easily the two top guys in the company. Instead of being a good sport about the whole the thing, Ego insulted 450 and left the ring with his head down.

Body Magic (Ashton Vuitton/Brady Pierce) faced Two Star Heroes in a tag match. This was  a fairly short but fast paced match. Problems between Two Star Heroes left them vulnerable to attacks from Body Magic and the lack of unity between Castro and Knicks led to a lack of a victory. Body Magic got the win.

Suge D was supposed to face his partner, Epic, in a match for his freedom. If Suge won, he would get his freedom but if Epic won, Suge would not only have to finish serving his time, but Epic’s as well! Epic refused to face his partner which left the warden to find a replacement. His replacement was in the form of Remi. Not only that but now he also had another inmate outside the ring to make matters worse. That other inmate is Christopher (Chris Hall), who apparently fell on some hard times after being fired by Colonel Jesse Corgan and ended up in prison. Suge was at a major disadvantage because every time he tried to get the upper hand, Christopher intervened and beat him down some more. Suge never gave up the fight as he had so much at stake and he overcame the odds and won his freedom.  The fans loved it as much as Suge did. Excellent match by all involved and a feel-good moment in that ongoing story (which is one of the better stories going).

Scotty Young was supposed to have another match with Jake O’Neill but Jake came to the ring with his arm in a sling stating that he was unable to compete. Scotty was pretty annoyed by this and rightfully so as it turned out to be a ruse. Jake ripped off his sling/bandage and choked Scotty out with it. The referee called a no contest and Jake left the arena proud of himself. After the ring cleared, Colonel Jesse Corgan and Miss Prig came out and issued an apology statement.

Da Soul Touchaz defended their tag titles against The Painkillers (with manager, Eryn). This time the Painkillers put up a way better, and longer fight, than they did the last time these two teams squared off. This was a top-notch tag match with a lot of good double-team moves by the Painkillers and the usual flash and pizzazz that Da Soul Touchaz are famous for. A big pounce by Willy in a comeback spot sent the Painkillers packing (and likely in need of some painkillers of their own).

A long-time feud came to a bloody conclusion as D’Arcy Dixon defended the women’s title against Mickie Knuckles in a “first blood match”. The premise was that the first wrestler to bleed, loses. The referee, of course, has to see the blood. These two ladies beat each other worse than most guys do in wrestling matches hoping to draw some blood. They fought all over the arena, breaking lots of chairs in their path. They used anything they could find to choke, bash, trip, and beat each other. When the action finally did make its way back into the ring, the referee got knocked out which meant he didn’t see it when Mickie was busted open and gushing blood from her head. The Devious Mickie ran and got her mask that she wears to the ring so it would hide the blood and continued to bash on D’Arcy. D’Arcy never stopped fighting back and proved to be tougher than ever but all that toughness wasn’t enough to overcome Mickie’s tricks. Mickie wiped her own blood all over D’Arcy’s face and when the referee came to, he saw a bloody D’Arcy and awarded the match to Mickie Knuckles. Mickie now fulfilled her destiny to not only take the women’s title, but to take D’Arcy to a dark place that she’d never been before. This match was nothing short of brutal and amazing, proving that ladies wrestling can be every bit as good as the men when you have two strong talents like D’Arcy and Mickie.

Marshe Rockett had another chance in the main event to face Jocephus for the RPro title, this time in a best of three falls match. Jocephus shocked everyone, including Marshe when he scored the first pin very quickly. A long battle ensued after that for the second fall which Marshe won after a gruelling battle that looked as if Marshe wouldn’t survive. After some more back and forth, the monster, Jocephus, won the third fall and retained the title. This was a fantastic battle between two very talented wrestlers. Marshe has really stepped it up recently and the fans are responding in a big way. This feud is likely to continue and if it does then the fans will be the real winners as another battle between these two would be another great main event anywhere.

Don’t Tread was another fun night of wrestling from a federation that keeps getting better as it evolves. Next month’s show (May 16th at the same venue) should keep up the pace they’ve been on and be another show that should not be missed!