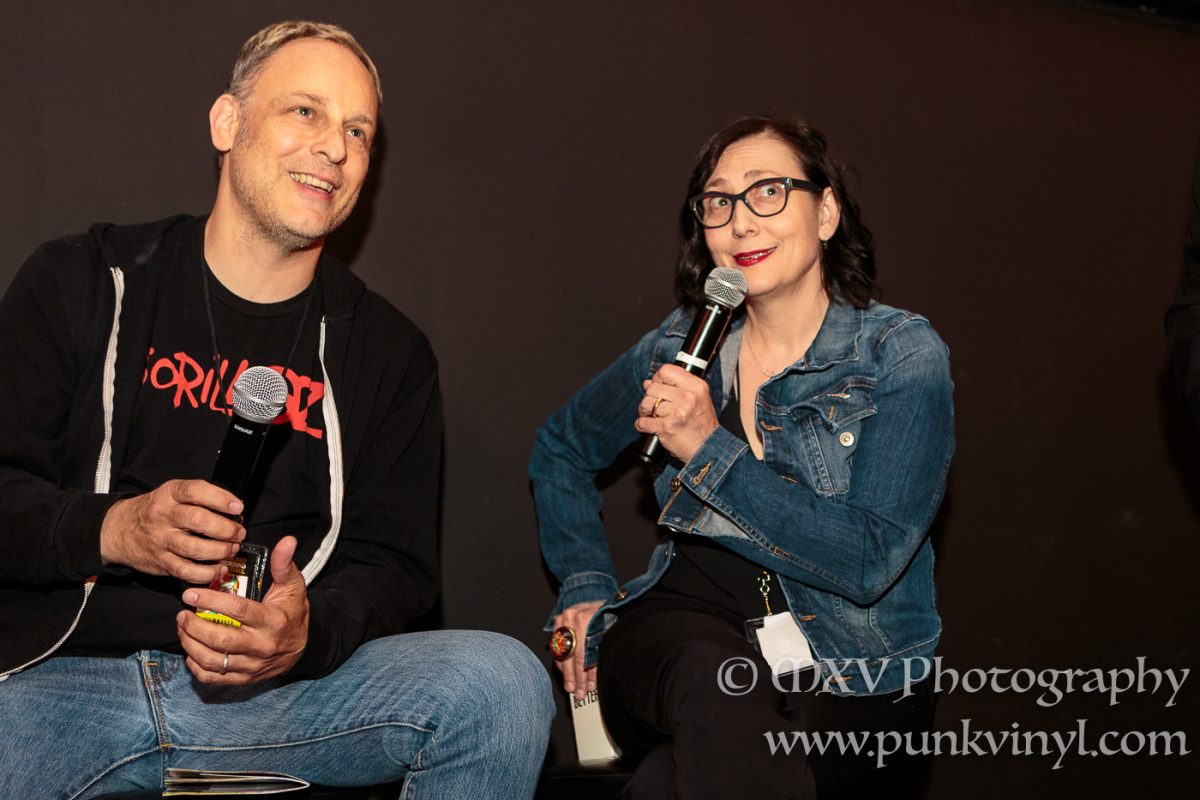 Last night, The Chicago Underground Film Fest presented a special screening of the Wax Trax Records documentary, Industrial Accident. Anyone who grew up in the Chicagoland area in the 1980s and is a fan of any kind of punk, industrial, alternative, experimental, and underground music will be very familiar with the legendary Wax Trax record store in Chicago, and most of them will also be familiar with the Wax Trax record label that grew out of it. Every fan of non-mainstream music, especially punk rock, who grew up here will have a Wax Trax story for you. The store and its two owners, Jim Nash and Dannie Flesher, did more to change the face of music in a major metropolitan city than any place on the planet. They literally brought this music to Chicago, spread the word, and gave like-minded fans of this type of music and scene a place to hang out and meet others. People like me spent every dollar they could save up buying stacks of records there, bands formed there, members of bands worked there, and the store even started a record label to put out some of the most amazing music of its time. They created an entire new music scene based around the bands whose records they were releasing. There was nothing like it anywhere else on earth, and there wasn’t anyone else like the two people who made it all happen, Jim and Dannie.

The story of Wax Trax the store, and Wax Trax the label is a thing of legend, and something that surprisingly hadn’t been documented before aside from people sharing their various personal stories with each other in regards to Wax Trax. It is a story that not only is extremely interesting, but it is a slice of history in a time long gone that needed to be documented and preserved, and thankfully the daughter of one of the founders and her husband took on the task and the result is now available for public consumption as a film titled, Industrial Accident: The Story of Wax Trax Records. It has been making the rounds lately being screened in various cities and it made a stop in the city where it all began last night at the Logan Theater.

The event started with an introduction by two of the film festival members and then the movie began. The film tells the story of both the store and the label, starting with the original Wax Trax Records store that Jim and Dannie started, and subsequently sold in Colorado before packing it all up and moving their operation to Chicago. Jim and Dannie were an openly gay couple back during a time in society where people were closed-minded and far less accepting. The couple found Chicago to be just the kind of city they were looking for and little did the city know how much these fine fellows would change it for the better.

Upon its opening, the store rapidly became a regular hangout for everyone into any kind of new and exciting punk rock and alternative music, two style of music that were not readily accessible to people and hard to find. Jim and Dannie stocked all this great music and turned everyone who stepped through the door onto this great music. People would go there not just to shop, but to meet people, to hang out, and eventually it led to people gathering for parties and even starting bands. That led to the Wax Trax label which blossomed an entire scene of industrial music that was as new and exciting in the late eighties and early nineties as punk rock was in the late seventies to early eighties.

The story of the movie is told though various interview clips with various people who worked for the label and/or the store, hung out there, played in bands that released records on the label, were related to Jim and Dannie (including Jim’s ex-wife, son, and his daughter who directed this film). There’s lot of great film clips of people in the record store, and various bands performing life. Where they found some of this footage is a mystery but man is there some great treasures in this film!

As the story of the label unfolds in the film, you learn of the amazing rise and huge success of the label and its ultimate decline and fall as well. They say a star that burns twice as bright will last half as long and Wax Trax Records burned amazingly bright for a few years before the excess led to its unfortunate demise around the same time that the world lost a pioneer in Jim Nash when he passed away at the far too young age of 58 which ultimately was the final nail in the coffin for both the store and the label.

The stories in the movie are fascinating and educational and they really don’t dig super deep into the details, but go deep enough to tell the story and keep it moving along. There’s plenty of funny anecdotes throughout the film that had the entire audience laughing out loud and there is plenty of emotional moments in the film too in the later parts of it that will move some to tears. It is an excellent trip through time telling the story and reflecting back at an amazing time for music and for this city’s music scene and really showcased just how special yet short-lived it really was. Much like it happened in real life, the film was one hell of a ride, and one you didn’t want to see end.

After the film was over, there was a short Q&A session with Mark and Julia as well as Wax Trax alumni, Chris Connelly and Sean Joyce. Sadly the audience was light on questions and the festival was light on time as they did two screenings of the film only about 20 minutes apart. It was a fun little session though and was a nice way to end the evening.

If you ever frequented the Wax Trax store or even owned a single released on the Wax Trax label, you owe it to yourself to see this film. The importance of Jim Nash and Dannie Flesher and Wax Trax Records can’t be overstated and it is wonderful that their story and legacy have now been preserved in this film.