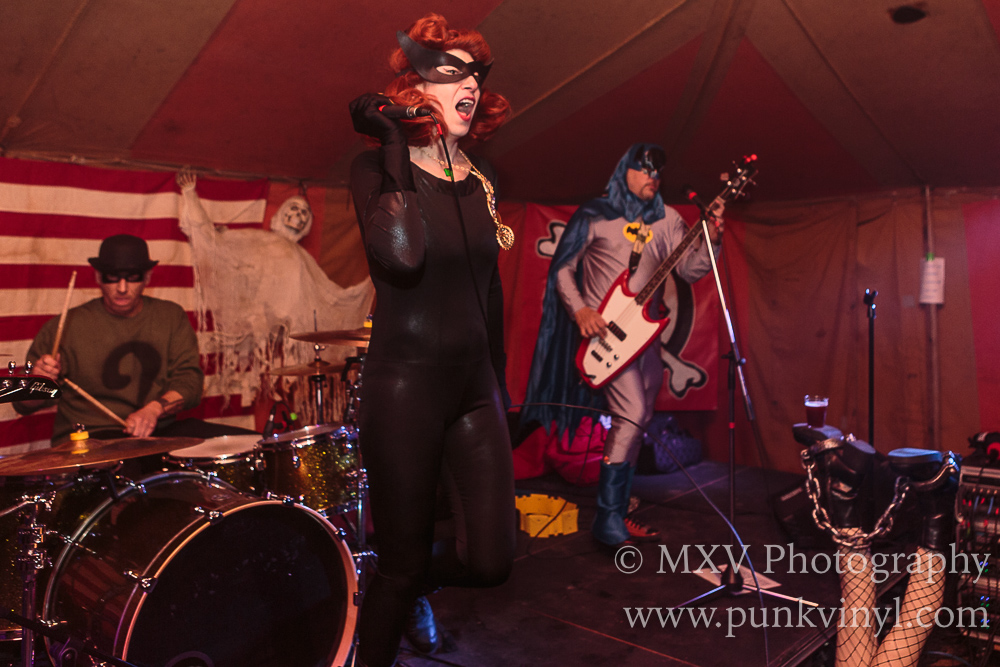 Thursday night over in Berwyn, a small bar called Cigars and Stripes was the host of a special record release show for Hotlips Messiah. The band just released an epic, 46 song double LP with really beautiful packaging (a review will be forthcoming on this site). To celebrate the release, the band performed many of the songs you’ll find on it and the show was the first chance anyone had to pick up a copy.

The show itself was in a fenced in parking lot connected to the bar. It was held inside an actual old Ringling Bros. circus tent! The event featured two bands and a fire dancer so it was all the fun and the appearance of a circus sideshow sans the animal cruelty. Despite it being cold outside, it was comfortable inside the tent and the show drew a pretty sizable crowd, especially for a weeknight.

Before each band, Kimchee Clownstar entertained the audience with fire dances. She had a variety of fire gimmicks like batons, swinging balls, and staffs that she ignited, twirled around as she danced around the stage, did stunts with, and even lit with her hands and extinguished in her mouth! It was mesmerizing and she was very talented with the fire devices. Punk rock needs more performances like these at shows, though one could see why a club would shy away with it, you know with the fire and all. She was hugely entertaining and hopefully we can see more of her in the future.

The Hamburglars were the first band to play. For those of you not familiar with these guys, they are all dressed as The Hamburglar from McDonald’s and all their songs are about McDonald’s and its food. They will also use the word “robble” (The Hamburglar’s catchphrase) for many of the lyrics to the songs. They play a variety of “cover songs” by rock and punk bands, but changed to be all about McDonald’s. They did Robbled versions of songs by Ramones, Naked Raygun, AC/DC, BOC, and lots more. They were a ton of fun and if you are going to be something of a cover band, this is how you do it! They were quite clever in how they retooled their songs to fit their gimmick but it seems odd they have yet to rework The Weirdos’ “Happy People” into “Happy Meal”. It writes itself! “Happy happy happy happy meal…”.

With it being so close to Halloween, the members of Hotlips Messiah were all dressed in costumes, all but one of them was a character from Batman. Traci Trouble was a stunning looking Catwoman, Rich Bastard was Batman with a dad bod, Larry was The Riddler, Fred249x was an amazing looking Penguin with a great resemblance to a young Burgess Meredith, and Infectious Rex, well he was wearing some sort of creature mask that didn’t appear to be connected to Batman at all but it looked neat. They started their set with “House By The Cemetary” and it was immediately apparent that the band brought their A-game when it came to the amount of energy they put into it. Traci was bouncing all over the stage and the rest of the band were knocking it out of the park with the music they were playing. They were fast and energetic and obviously having a good time. A hat trick of great Hotlips stapes followed with “Destroy All Boys”, “Bad Sci Fi Dystopia”, and their best song of all time, ” Several Species Of Small Furry Animals Gathered Together In My Brain And Grooving With A Pick Axe”. That last one is so good it will make you an instant fan and having you singing along to the chorus “I’m having a nervous breakdown”. Tremendous!

From there it was one great and catchy song after the next. The band is really unique, their use of keyboards is reminiscent to The Screamers but Hotlips also has a prominent guitar whereas The Screamers refused to use them. They are science fiction mutant rock of the best kind. Traci was so animated bouncing around the stage that she ended up busting the zipper on her costume but that didn’t slow her down at all. They played a good handful of songs that appear on the new double album, plus some other, older hits from the first album, Mutants Unite. When they got through the end of their setlist, which concluded with “Number 12 Looks Just Like You” the audience wanted more, so they played one more song before calling it a night. It was one of their better shows, and they are always entertaining but they turned it up a couple notches this night for their special event. It was a really fun evening that everyone who missed it should be at home second guessing their poor life choice for not going.