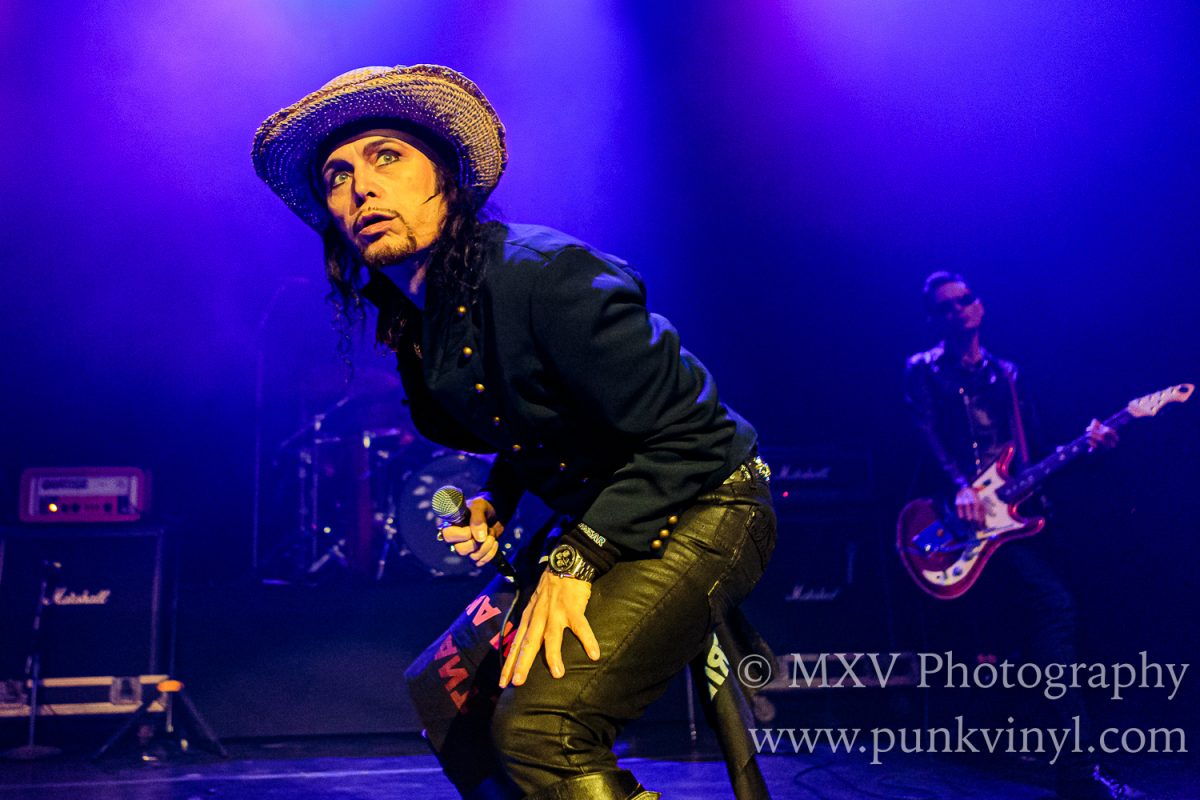 If you grew up in the 1980s and had good taste in music, then The Vic in Chicago was the place to be on Saturday night as it hosted a special night of music from the legendary Adam Ant. Adam and his band weren’t just playing any old show, they were performing his Friend or Foe album in its entirety plus other favorites! The line to get in was wrapped around the block and lasted well into the start of the opening band. Everyone seemed to come out of the woodwork for this show, and this was on a night that had other big concerts happening around the city at the same time.

While the latecomers were still filing in, the all female quartet, Glam Skanks took the stage to an already very full house. These ladies brought the rock in a big way. Their sound harkens back to the glitter rock days and fans of Bowie and the New York Dolls would find a lot to like about these talented ladies. Great hooks, heavy riffs, spunky attitude, these ladies had it all. They played a little over a half hour and were a lot of fun.

They didn’t waste much time getting things set up for Adam Ant once Glam Skanks were finished and it was a good thing too, because Adam Ant was fixing to play a lengthy set. When Adam and his band, which consisted of two guitar players, a bass player, and two drummers(!), took the stage, they wasted no time getting into the Friend Or Foe material. They played the entire album, in order, with very little time taken between songs The dual drumming really was a nice touch, especially in the many Adam Ant songs that feature the tribal drum sound. It really added extra oomph to those catchy rhythms. Adam was moving about the stage, posing, dancing, smiling, and wailing away as they played one good song after the next. The audience constantly sang along to the choruses and even the verses of the more popular numbers and everyone was having a really good time.

Once they got through the album, it was time for another hour-plus of the earlier Adam and the Ants hits! Nearly all of the fan favorites were played and they sounded as good as ever. The crowd seemed to get even more excited as Adam worked his way though songs like “Antmusic”, “Car Trouble”, “Ants Invasion”, “Zerox”, “Prince Charming”, and many more. The crowd sang along even louder than earlier, and many people on the main floor were dancing. After over 90 minutes of non-stop excellence, the band concluded their main set with “Stand & Deliver” before leaving the stage.

The crowd wanted more and Adam came back to the stage to do a three song encore, which concluded with “Physical (You’re So)”, then thanked the crowd and left the stage. It was close to two hours of non-stop fun, with great sound and a rock-solid performance. Every person who stood in that long line got their money’s worth and it was a great way to spend a Saturday night.