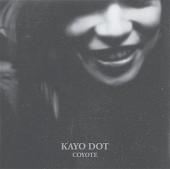 The Village Voice website has a feature on the upcoming Kayo Dot album, Coyote,  on Hydra Head Records today and you can download a song from the album on the site for free. The song is called “Whisper Ineffable” and is the second track on the aforementioned album.

Aside from the free mp3, the article gives a pretty good in-depth preview of what to expect from the full album as well as some information from the band itself on what the song is about. According to the article, the band breaks the golden rule of metal by featuring almost no guitars on their album, which will be very interesting to say the least.

Check out the article and hear it for yourself right here.