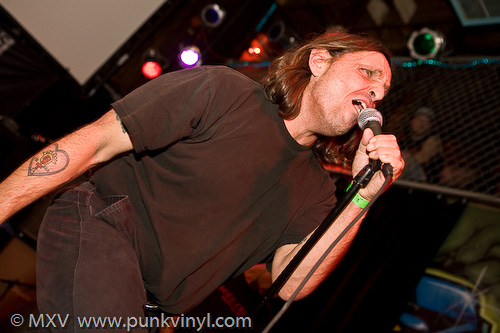 Last night a legendary hardcore band returned to Reggie’s for a night of punk rock. That band happened to be MDC and they are once again touring in honor of releasing some new material. It’s hard to believe the band has been around about 30 years now. Talk about something making you feel old!

Chicago natives, Mad Minute,  started the show with their brand of punk rock. They were a very energetic fast punk band, but not hardcore. Their songs were catchy and tight and their 30 minute set flew by quickly, which is always the sign of an enjoyable set if you aren’t looking at your watch half the time.

Another local act, Sex Bunker took the stage next. They were loud, heavy, and a little sloppy in a way that was reminiscent of the old New Jersey band Cyanamid, except not as chaotic or out there. Whether or not the sloppiness is a result of not enough practice or it is intentional, in Sex Bunker’s case it mostly worked to their favor. Their one guitar player is a kind of short but makes a huge sound and their singer was large and menacing, stalking the stage like he was looking for prey before taking it to the floor to sing the last few songs in the crowd. They played a half hour and it too went by fairly quickly.

The Non-Believers played third and they were also the third band on the bill from this city. A couple of them were decked out in 70s style punk outfits including the singer wearing an armband with their band logo in what one could assume was a sort of homage to Darby Crash (at least in style, as their singer took no other influence from the late Mr. Crash). They were a poppy 70’s punk inspired rock band who played mid-tempo songs with a lot of sing along parts, which their friends and fans in the audience who seemingly appeared to only see them play and then disappear, did their entire set.

All the way from the UK, The Restarts took the stage next. This three piece band played really punchy street punk with sing along parts and quick tempos that got the modest sized crowd’s blood pumping and bodies moving. Aside from talking a little bit between songs, the band just stuck to business and really delivered the goods in their set. They had a good old school punk sensibility to them which made them touring with and sharing a record with MDC a perfect fit.

Starting their third decade, MDC took the stage after a bit of preparation which included hanging up their banner behind the drums. They started things off with an old song and the small but enthusiastic crowd instantly started moving. The crowd calmed down during the handful of new songs the band started playing even though the new songs sound a lot like the old songs as the band hasn’t changed their sound or formula much in the past three decades.

The band played about a 45 minute set of new songs and lots of classics including their legendary, “John Wayne was a Nazi” which some in the crowd were chanting for all night long. The band put on a fine set and age really hasn’t slowed them down much at all. The most important thing was that even though the size of the crowd was small, the band played like it was a packed house and didn’t half-ass their performance at all, and gave it 100 percent which was a nice thing to see from such seasoned veterans. Those who skipped out on going to this show missed out on a fine performance by a bunch of hardcore’s founding fathers.