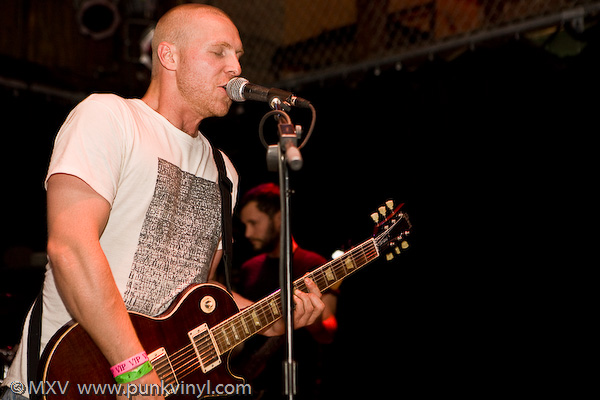 Mouth of the Architect 5/28 at Reggie’s

Reggie’s over in the South Loop got the holiday weekend off to a heavy start with a four band bill on Friday night headlined by the returning Mouth of the Architect. The lineup on paper looked pretty solid going in and looked to be a fine way to start a fun weekend.

Chicago’s own, The Satire, started the evening’s festivities. They were a hardcore band with thick metallic style guitars. They were very fast and quite heavy and for some reason nearly everyone except the singer and drummer played with their back to the audience half the time. When they weren’t facing backwards the guitarists and bass player pounded on their instruments with reckless abandon and the bass player was especially chaotic and fun to watch. They played about 20 minutes, short and to the point. If you blinked you missed them.

Another Chicago band, Beak, were next. They were a post-metal type band akin early Isis. Their songs were a little on the long side of the spectrum with lots of heavy parts and changes with yelled vocals. Keyboards added to the fullness of the sound nicely and the band really had a great sound to them. They played about 40 minutes which actually didn’t feel long enough which really speaks to how good they sounded. Hopefully they will put out some vinyl soon and play some more shows around town as they are totally worth checking out for fans of this style of music.

A third local band that has been around for a while now and are quite a good band, and that was Raise the Red Lantern. They are more of a stoner rock type band that mixes elements of punk and modern metal in their songs which results in a fairly fast tempo good time. They got even tighter since they last played here and time is doing the band justice as they are really developing into a great band and one that was already well worth checking out before. Their half hour or so set flew by and they left people wanting more.

Mouth of the Architect finally took the stage after setting up all their gear and sound checking. They opened with “Baobab,” from their album, The Ties That Blind. It sounded even heavier than on the album despite the fact the bass player’s instrument was malfunctioning. Even sans-bass the band sounded great during this song and it was obvious they’ve been spending a bit of time on the road because they played like a well oiled heavy machine.

The band is touring in support of their new EP, The Violence Beneath so the second song was the title track to that record. Oddly enough it was also the only song from that EP they performed that night. Just like the first song, it was even more brutal live. The band has three of the members sharing or splitting vocal duties and the dynamic of three different people yelling from deep within their souls really works great in the live setting. They followed this up with the best song from their last album, Quietly, titled “Rocking Chairs and Shotguns” which is a seven minute epic full of power and emotion all wrapped up in a super heavy package.

From there the band mostly spent time in their back catalog of songs all while the bass player fought with bass problems until someone from Raise the Red Lantern gave him his bass to finish their last two songs with. Despite the technical problems up to that point, the band soldiered on and never let it slow them down or even upset them. They had a great attitude about the whole thing and still delivered the best set they could under the circumstances and there wasn’t a disappointed person in that crowd. If there was one complaint to be had it was that they didn’t play longer as they definitely left people wanting more. The band has really found their sound in the past few years and hopefully they won’t slow down and will continue of this path of greatness they have been travelling for quite a few years now. They are definitely a band not to be missed!