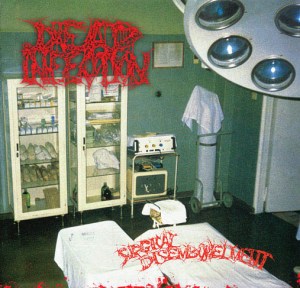 Poland’s Selfmadegod Records is proud to announce the reissue of the debut album from country mates Dead Infection. The cult goregrind outfit’s first full-length, Surgical Disembowelment, was originally released on CD and LP in 1993 by now-defunct German label Morbid Records.

The vinyl re-release of Surgical Disembowelment contains the same ten tracks as the original version of the album, which was recorded in 1993 at PR Studio in Olsztyn, Poland. This re-issue of the album is strictly limited to 500 gatefold copies, with 100 on red vinyl, 100 on green, and 300 on black vinyl. A final release date in early July will be confirmed shortly, but a pre-order package is available now at Selfmadegod’s website