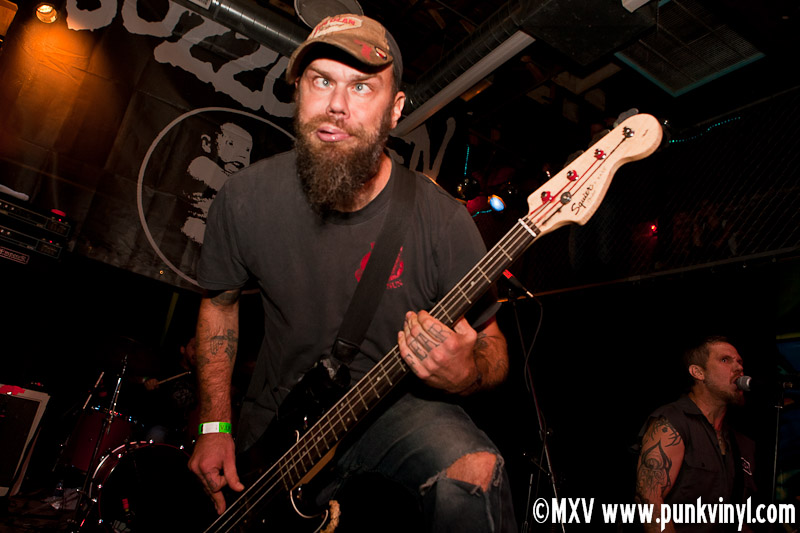 For the second week in a row, Reggies put on a show that started kind of late for a school/work night but the headlining band was a big lure away from the comfort of sleep. This week’s lure was the long-overdue return of Buzzov•en, who have not toured in a very long time. They were part of a four-band bill that took place on a beautiful September evening, so there was no excuse to miss it.

Czar was the first band to take the stage. These guys played a unique blend of doom metal, math rock, post rock, and metal that was very heavy on the low-end despite their lack of a bass player. They had two guitarists, one of them tuned extremely low, and a drummer. These guys made a noise as loud as a band of ten men and their song structures were really fascinating. They never turned down the power, even when going into post-rock mode and they were really impressive. Apparently The Atlas Moth isn’t the only best-kept secret in Chicago, it has more than one and these guys are it. They really set the bar high for the evening!

Drug Honkey, a local band, played second. Despite their poor choice of a band name, they were quite entertaining. They played some slow tempo experimental drone metal. The music was very heavy and methodical, with droning atmospheric guitars and lots of keyboards and samples. The singer growled his vocals but his vocals were processed which made them a lot more spooky and ambient sounding. They had a good grove to some of the songs too and were unlike almost any band around. They have a lot of promise, but may want to re-think the name. Definitely a band worth checking out for fans of unique and heavy music.

Indian was the third band to play. Their main singer/guitar player seemed like a very angry man during the sound check and he seemed to have this aura of pissed-offness to him as he performed. These guys played super, super heavy doom style metal. They had so much low-end that you would have to invent new decibels on the spectrum to measure them. The force of their dual-guitar attack was physically assaulting. You could actually feel the force of the sound in your bones. The sound was so loud it is could probably be heard for blocks. The singer shrieked his vocals with this evil yell that was as intense as the pounding coming from the stage. They were so powerful and loud it was intimidating.

After taking a bit of time to set up their gear, Buzzov•en took the stage to an eager crowd. This band features Dixie, the bass player from Weedeater, playing bass and doing some vocals as this was his band before Weedeater. Just like in Weedeater, he commands the most attention because he is such an animated bass player. He rarely stands still and has a very unique playing style. The band opened with, “At a Loss” and the crowd was full of banging heads and pumping fists. They quickly followed it up with another song and rarely stopped between songs.

The band played a really sludgy mix of punk and metal. Their songs lean more to the punk side simply for the faster tempo they play at than most sludge bands like Eyehategod. They were very loud and made a really big and heavy sound. They have mastered this controlled sloppiness that has the songs seem like they are about to swerve out of control into a big mess, but somehow the band mixes up the chaos with the controlled and their music is that much heavier sounding because of it.

The band had a few equipment glitches but that didn’t deter them in their quest to deliver a solid set of angry, dark and confrontational heavy music. The band, despite the small glitches, played like they never took a day off in their career and they played about an hour’s worth of material spanning their career, including ending their set with a sludge-ridden cover of the Big Boys’, “Red/Green” which if you didn’t know the song, would have thought it wasn’t a cover seeing how the band made it sound like one of their own songs.

Those that opted to get to bed on time once again missed out on a great evening full of quality bands, topped off by the return of a band that never should have taken so much time off in the first place, but hopefully will get the appreciation they deserve now that the style of music they were way ahead of the curve in playing has a larger fan base.