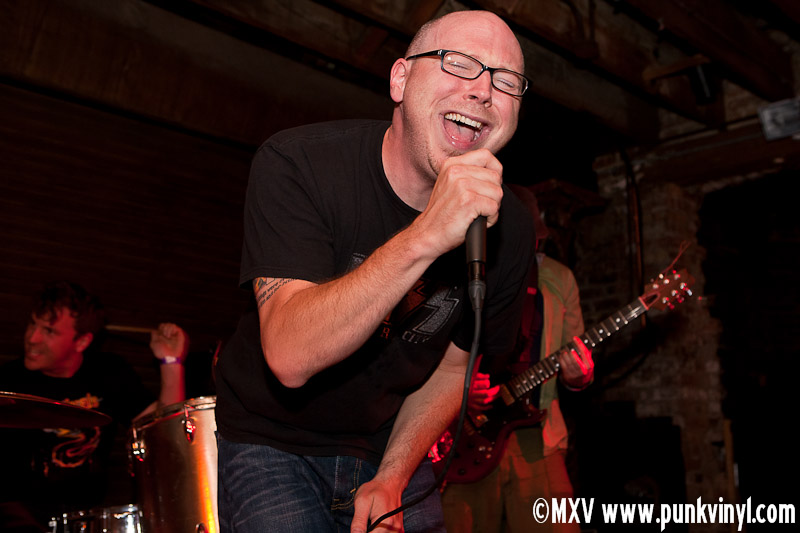 As fall rears its ugly head letting Chicagoland know that summer is over and hibernation season is approaching there is only one redeeming factor of it and that is Riot Fest. Much like last year, this year the festivities started a few days early with a “secret” show headlined by Smoking Popes. The show was free by invitation only to those randomly chosen amongst the list of people who bought three or five-day passes in advance for Riot Fest. The AAA building was once again the location for this intimate show.

They Face Reaction was the opening act. Their name doesn’t make a lot of sense nor was it a very good choice. These youngsters originally formed in Brazil and somehow ended up moving to the Chicago area. They played some very musical pop-punk tunes with punchy guitars. They weren’t anything at all original, but they could play well and for the style of music they play they did it well and with a lot of energy.

Chicago’s own Smoking Popes took the stage as the small AAA building started to reach capacity. They opened with “Let’s Hear it for Love” and then proceeded to play the entire Get Fired album, in order. They did this in honor of it just being reissued on Asian Man Records. They played their sugary pop-punk songs with a lot of energy and a good attitude and the crowd sang along to nearly every chorus of every song. It was enlightening to see so many happy faces in the crowd singing and dancing in place as the band played. The band itself seemed to be really enjoying themselves on that little stage too and seemed genuinely happy to be doing the show which considering the warm reception they received, made perfect sense.

Once they finished with the Get Fired material they went into a lengthy set of newer material, and even took a request or two from the crowd! They played such songs as “Rubella”, “No More Smiles”, “Grab Your Heart” and of course near the end of the set, “I Need You Around” which was their big radio hit back when alternative-rock was all the rage.  The band came out for an extended encore too and played a few more songs. When it was all said and done, they played for well over an hour and put on a very solid and fun performance. It’s hard not to like a band that have such good attitudes and play really catchy songs and there wasn’t a person in that building Friday night that didn’t have a good time. It was a strong way to kick off this year’s Riot Fest and the fun is just getting started!

See some additional photos from this show here.