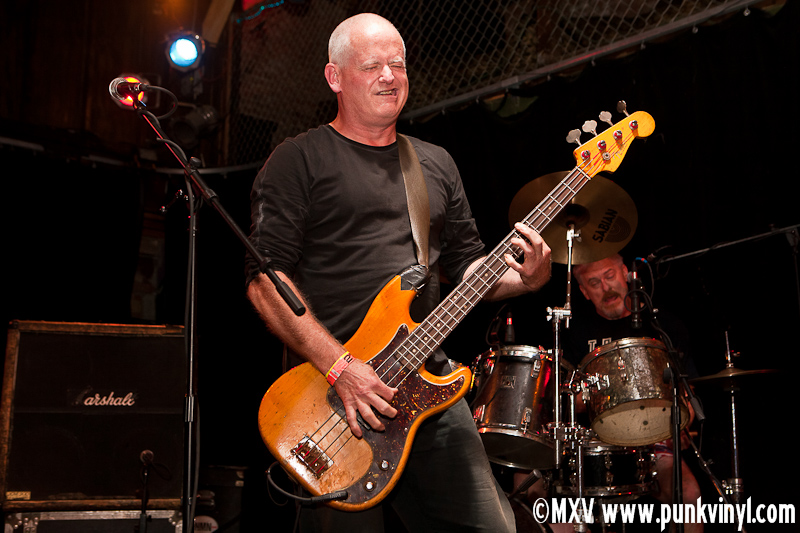 Friday night Reggie’s scored again with the return of one of Canada’s finest punk rock bands from way back in old times, Nomeansno! They headlined a three band bill that a lot of people were excited about as evidenced by the very large turnout.

Vicelords played first. They are a local act that has been around for a few years now. They played some off-kilter soulful post-punk/punk rock that seemed rather inspired by Nation of Ulysses (without the cool gimmick) and the Make-Up in their sound. Their singer seemed a bit spacey (or stoned) but they put on a solid set and were quite entertaining. If they lived in DC, they would totally fit in on the Dischord Records label.

Ford Pier was next. This was a three-piece band from Canada. They played really quirky art-punk/indie rock/pop. At times they had Minutemen-esque guitar lines, at others heavy riffs, and at still others odd guitar noodling. It was almost like a No Wave band without the abrasiveness. Some of the songs were short and sweet and pretty catchy, others were painfully long. Their sound almost came across as a band trying to squeeze 100 identities into each song. They were alright but their set felt a little too long, had it been about 15 minutes shorter it would have been a more solid performance.

The club filled almost to capacity when Nomeansno was setting up. The band finally got their gear in order and started playing to the delight of everyone in the audience. After the first or second song they busted out “The Day Everything Became Nothing” and “Dead Souls” back to back, the latter was the one that really got the crowd moving. From there they played a handful of new songs and mixed up plenty from their numerous releases over the years. Sadly they left out their best song ever, “Dad”.

The band sounded great and talked a lot between songs too. The rhythm section was spot-on, these guys played like the well-oiled machines they are and the crowd appreciated every second of their performance. They have such a unique variety of songs that run the gamut from punk, to math rock, to trucker rock, to just rock and everywhere in between. Their songs are all very catchy and they have an original sound unlike any other, and one that translates perfectly to the live setting.

Nomeansno played for well over an hour and close to 90 minutes had passed by the time they finished their encore and the crowd still hadn’t had enough and were chanting for more, but sadly the show was over and the crowd left hoping the band will live up to their promise of returning a lot sooner than the span of time that passed since the last time they came to town. All in all it was an excellent show.