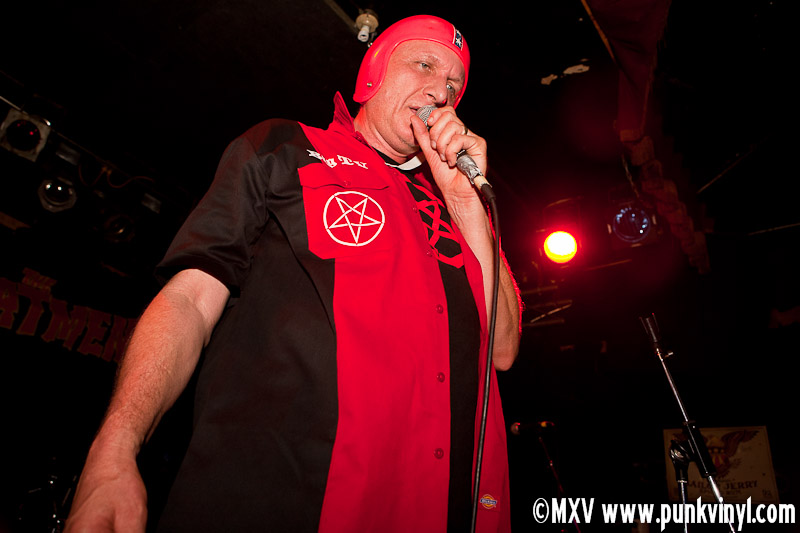 Sunday night Riot Fest ended with a bang over at the Double Door. That sauna was the place to be if you wanted to end your punk rock staycation by seeing three legendary and influential hardcore bands reunite (in various forms of originality) for a wonderful trip back through time to the early 1980s.

The Meatmen made their triumphant return to the Windy City for this occasion. The band looked suspiciously identical to Tesco Vee’s Hate Police who just played here in the summer (and played a ton of Meatmen songs t00) which was a good thing as that band sounded great at that show. The bass player came out dressed as a parody of Rob Tyner of MC5 and introduced Tesco Vee, who came out on stage with a giant inflatable penis. The band quickly started firing off some vintage Meatmen classics from the early EPs. They played such greats as “Dumping Ground”, “Mr. Tapeworm”, “Meatmen Stomp”, and others. They did the entire “Suck Trilogy” in chronological order complete with costume changes too! Tesco had a ton of various props, many of which shot confetti into the crowd, and his humor and wit was as sharp as ever. The crowd went completely nuts for pretty much every song they played, even the newer stuff. The band put on a clinic on how to entertain a crowd and honestly they could have easily been the headliner as they were the most fun band of the evening.

The Zero Boys took the stage next. The crowd was even more packed up front than it was for the Meatmen and people were very excited for them. When the band was getting ready to play, singer Paul Mahern walked to the front of the stage and started shaking people’s hands and introducing himself. It was a nice friendly gesture that made people feel good. The band opened their set playing a couple of new songs that were very melodic. The crowd kind of stood there dumbfounded, wondering where the hardcore songs were. After the second song, Paul told the crowd they were starting off easy before they played the old songs and after one more song the moment came that the entire crowd was waiting for. The band tore into the first song from the Vicious Circle album and the crowd went ballistic. It was a sea of slam dancing, moronic human bumper cars and even a couple of failed attempts at crowd surfing (one of the most idiotic practices in history). There was also a ton of people singing along too. The band played the entirety of Vicious Circle, pretty much in order too! They finished with an extended jam that incorporated part of The Seeds, “Pushing too Hard” in the middle of one of their own songs as Paul went into story telling mode while the band jammed. It was lengthy but a fun way to end a killer set. At this point it was also about 200 degrees in the sweatshop passing itself off as a music venue.

Crowd anticipation was at an all time high for Negative Approach. This however wasn’t really the authentic Negative Approach, the modern-day version is John Brannon and his other band, Easy Action, playing as Negative Approach. The band came out and the guitar player strapped on his guitar and faced the drummer and stayed in that position for the entire set, never facing the crowd for a second! The bass player was a lot more crowd friendly though as he faced the crowd and even sang backups. John Brannon was every bit the intimidating front-man he’s always been in every one of his bands and he just has a tough-guy/pissed off look about him. This demeanor get’s channeled into his unique vocals that have a ton of aggression. Unlike his singing in the old days however, his current vocal style is to hold the microphone inside a fist and shove the thing in his mouth and gargle his lyrics. He didn’t enunciate very many of his lyrics and the result was more like undecipherable gurgling followed by a chorus you could understand. The crowd pronounced the lyrics better than he did as they sang along to the entire set sans the new material they played.

They played pretty much every old Negative Approach song in their studio discography as well as a couple new songs that were just released on an EP. The crowd went bonkers for the entire set, even the new songs. There was  non-stop singing along and John often held the mic out into the crowd for them to sing the chorus of any given song. He never stopped scowling and he didn’t waste much time talking between songs either save for announcing what the next song was going to be on occasion. Gurgling aside though, it was a pretty powerful performance and it served to bring Riot Fest 2010 to a close on a high and powerful note, leaving an exhausted and sweaty crowd in its wake.

As the crowd spilled out into the street upon the show’s completion, many of the Riot Fest staff were outside the club thanking people for their support, posing for pictures, shaking hands, and making the experience feel like something everyone went through together. This kind of personal touch is something you never experience at any shows, especially something on so grand a scale, and was a really cool gesture that made the entire week feel that much more special. Riot Fest 2010 was a big success, and it was five days of non-stop fun. Now the countdown begins for next year!