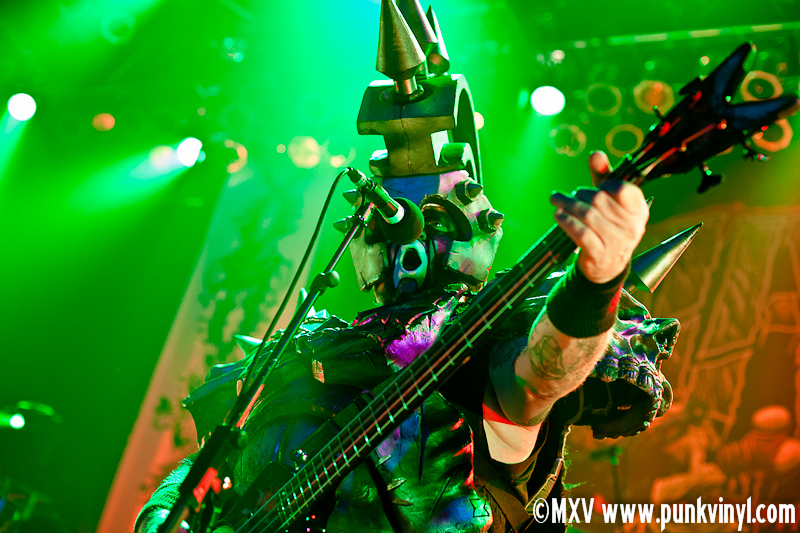 Halloween means two things: free candy if you are a kid, and the return of Gwar to Chicago. The band has done a show around the week of Halloween nearly every year since they’ve been a touring band. It is one of the better fall traditions here. This year’s visit was held once again at the House of Blues.

Infernaeon played a half hour set of some pretty tight death metal. They seemed a bit influenced by Cannibal Corpse, especially the singer who whipped his hair around a lot like their singer and dressed the same. He could almost pass for that dude’s younger brother. Their music was really hard and fast with a lot of cool changes and the vocals were quite powerful. Where they fell short was the singer’s between-song banter where he would talk about more popular, mall-metal bands and refer to them as “fags” between a lot of the songs. He spent nearly all his non-singing mic time trying to put his band over as the real deal by cutting down other bands. He’d have been better served just talking about what song they were going to play next and getting back to what he was good at, which was growling death metal vocals. His banter really soiled a performance that was pretty solid. They also did a cover of Metallica’s, “Creeping Death” which was surprisingly good and the crowd went nuts for it.

The most touringist band in punk rock, The Casualties, played next. These guys must not have homes and instead just live on the road because they are constantly touring. They play at every festival and every big tour you can think of and have been for years now. These guys put on a good set of energetic, classic sounding punk rock. They seemed to lack a bit of the energy that they usually have and the jumping and running around was pretty minimal. They may have been having a bit of an off night, that or the crowd just wasn’t feeding them with enough energy. They still played a good set, but it was just a little less energetic than most. Perhaps it was due to the singer not spiking up his hair like he normally does for the show. They may be like Samson and all the power lies in the hair!

The crowd was getting impatient and started chanting for Gwar as the finishing touches were being put on their stage set. The band came out on stage and took their places and the crowd instantly started going nuts. It didn’t take more than two minutes before Gwar was decapitating some helpless victims on stage and spraying blood everywhere. The lights were flashing and rather low and there was a good amount of fog so many didn’t even see the streams of blood coming until they were being showered in the face.

For this, the second year of their 25th anniversary tour, they once again ditched the intergalactic wrestling theme, along with Sleazy P. Martini, and instead opted for a series of various fights and decapitating of both aliens and famous Earth people. The first to go was Sarah Palin who got a major decapitation at the hands of Oderus and his band of slaves. Her corpse was torn of its guts and sprayed blood all over the place. The fans in the front row took delight in having their white shirts painted with the crimson blood of Sarah Palin.

The carnage continued as the band played a very nice mix of songs spanning their entire 25 year career. At about the halfway point in the set, Sawborg Destructo stormed the stage with plans to kill Oderus and the rest of Gwar, presumably to avenge the death of his relative, Techno Destructo . They locked up and Sawborg managed to do a bit of damage before he was overpowered by Gwar and killed. His blood re-soaked the audience and the poor security guards up front who had to catch a steady stream of crowd surfers while being drenched in various intergalactic body fluids in the colors of red and green.

One of the musical highlights came in the form of “As Pure as the Arctic Snow” which was the best song from the first Gwar album, Hell-o! This was a huge treat and a great surprise. They slowed down the end of it to be more heavy and mosh-friendly too. It was around this time that Lady Gaga made an appearance on stage. She came out wearing a toilet and had shit in her hair. She struck a whole bunch of poses and was acting her usual weird self until Oderus had enough and proceeded to tear her breasts off (and the toilet seat that was covering them). Her intergalactic mastectomy resulted in, you guess it, the crowd being sprayed with gallons of blood streaming from where her “little monsters” once were. It was the comedic highlight of the show.

The band played for about an hour and then left the stage. They came back and played a few more songs, including a new one from their forthcoming album that sounded really good. During this encore Oderus’s gigantic penis was spraying blood non-stop for the entire encore. Normally blood doesn’t come from that orifice so it would seem that he either has a kidney stone the size of Earth or he caught something bad from a space hooker. The front third of the House of Blues was a swimming pool of blood as a result of this intergalactic bukkake. As if that wasn’t enough, one of the Gwar slaves brought out a machine gun that sprayed red and green blood super-soaker style. No place was safe on the main floor and many a wardrobe was ruined after the encore, which is the sign of another great Gwar show.