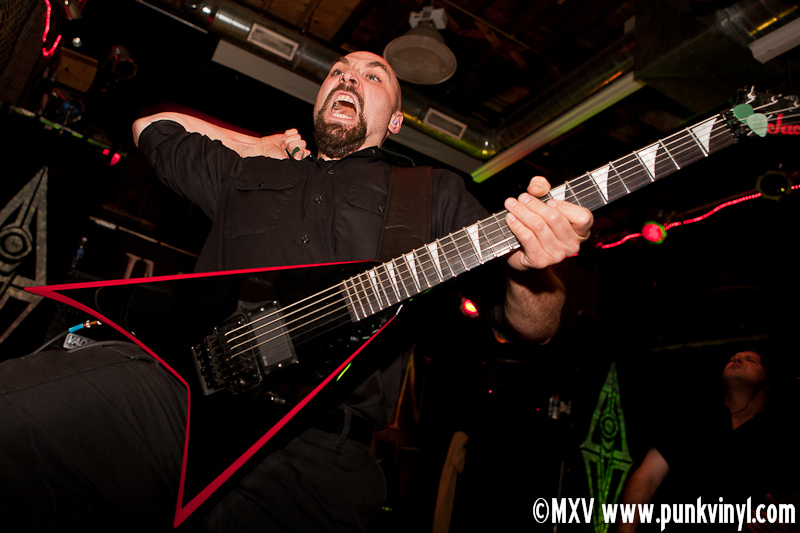 Last Thursday night was another big night of metal in the South Loop as Reggies once again was the place to be. Long time metal acts Immolation and Vader made their respective returns together and played to a pretty full and excited audience of headbangers.

Abigail Williams played a strong set of black metal. Their songs were fast and a little atmospheric and the singers vocals were raspy and powerful. They didn’t talk much between songs, they just belted out a tight, well-performed set. These guys are relatively new to the metal scene but are quickly going to become a band to be reckoned with if they keep up the fine work.

The crowd swelled to nearly double the size right before Vader took the stage. Many amped-up fans started chanting their name as the band was setting up their gear. They also started moving forward and it was apparent even before the band struck their first chord that this crowd was going to explode. When the band started playing that is exactly what the crowd did. The band played some really fast and thrashy metal with super aggressive growled vocals. As the band played with a youthful vigor, the crowd went bonkers in playing that ridiculously stupid practice of human bumper cars that they pass off as “moshing” these days. Gone are the days of circle pits and any sort of willing participation; the modern-day “mosh pit” consists of a bunch of amped up goons who randomly run into or shove people whether they want to partake of this practice or not. The band played a 45 minute flawless set of extreme metal that was a joy to watch and listen to and it’s no wonder so many people were excited for them, they ruled.

Immolation had awfully big shoes to fill having to follow-up the show-stealing set Vader delivered and while they put on a solid performance, it just felt a little underwhelming. It wasn’t that they played poorly, in fact they put on a really solid set of songs spanning most of their lengthy career. It was just that Vader was clearly the bigger draw, and seemed to suck the energy out of the room and left the crowd spent. Thankfully though for those who were there to be spectators and not there to randomly assault people, the crowd was pretty mellow and did a ton of headbanging to show their approval.

The band had a lot of energy and their singer/bass player had more hair than you could think possible for a human to grow. His hair alone had to weigh 10 pounds and went down to his knees. While he wasn’t singing he was flipping it all over the place and had he been standing close to the front of the stage, he easily could have knocked someone out with it! The band played close to an hour and did an admirable job and while they may have been a bit outshined by Vader, they still proved why they’ve been around for so long and put a nice close to a solid night of metal.