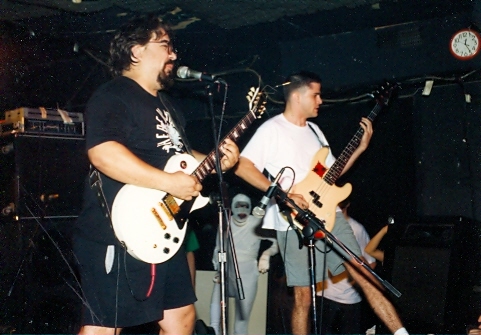 I was digging through the Spontaneous Combustion office last night and pulled out my boxes of DATs of shows I recorded. In the early 1990s I used to go to a ton of shows and I used to audio record them. I first had a Sony Professional Walkman D3 but one year after a big tax refund I upgraded to the first Sony portable DAT machine and recorded shows on that for a couple of years before I grew tired of the process and then later stopped going to so many shows. It would seem that I’ve always felt the need to document shows dating back to my early 20s, a practice that resurfaced with my photographing shows these days. I would almost always get permission from the bands beforehand to record them especially in the case of shows at Lounge Ax where due to the small size of that club it was easy to find someone from any given band hanging around the bar before their set.

One of the tapes I found was this Dazzling Killmen recording from Lounge Ax in the early 1990s. For some odd reason I didn’t mark the date on the tape, which was completely out of character for me and that is the only tape in the box I had that wasn’t marked with the proper date. All I know is I believe the Mercury Players opened up for them since they were both on the same tape.

I sent a message to Nick Sakes of the Dazzling Killmen alerting him of my find and told him if he wouldn’t mind, I’d like to post the recording for old fans to download. He promptly responded with his blessing (and even scooped me by posting the link to the mp3 on his facebook!). It was a pretty good audience recording (one of a few I made of the band while they were active, but the only one I did on DAT) and I figured at least a few people might get a kick out of hearing it, especially if you were there at the time.

Back in the early 1990s, I spent a hell of a lot of time going to shows at Lounge Ax in Chicago. That place was one of the best clubs ever in the world and at that time they were getting the coolest bands. During the...