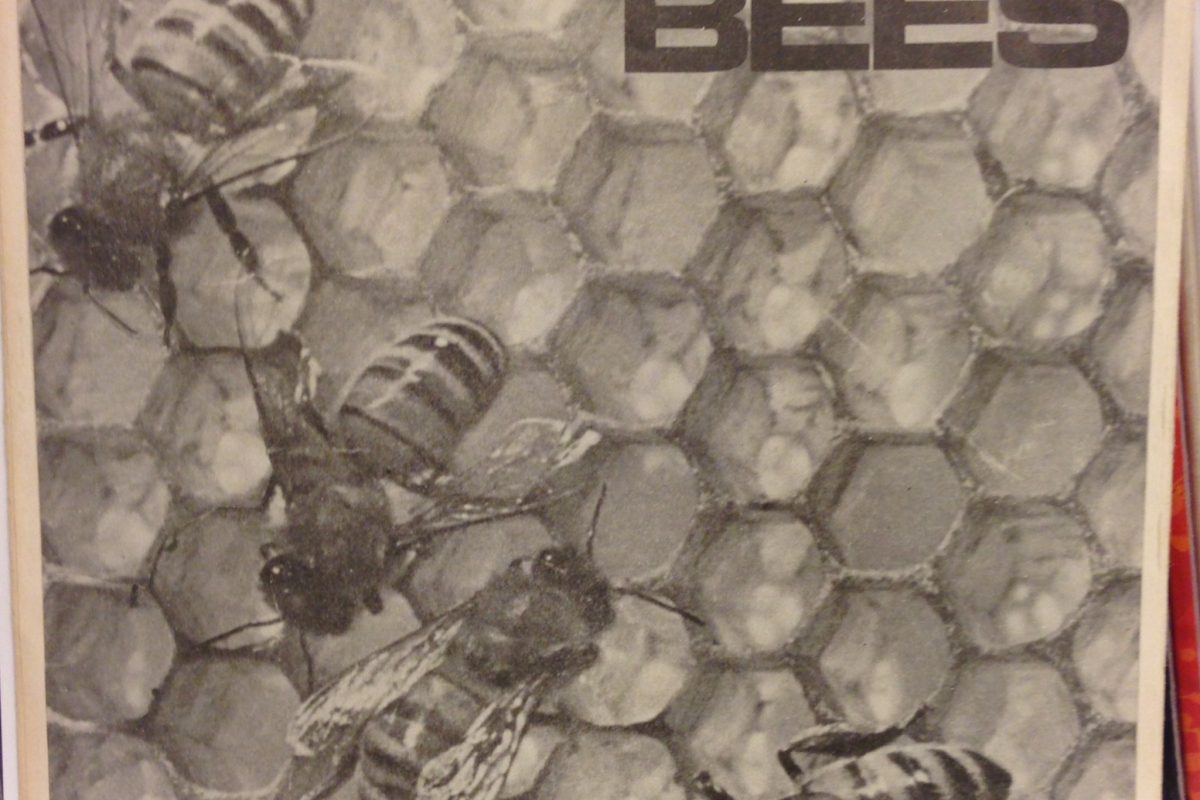 Way back in 1986 I had a promo copy of the first Skulls album, Dress Up and Die, sent to me from Buy Our Records. They used to send me records to review in my fanzine, Spontaneous Combustion. I played that record and became an instant fan. While it didn’t  sound like the hardcore punk I was normally consuming like crazy back then, it was still a rock solid record. The Skulls had a more trashy rock approach ala the New York Dolls/Johnny Thunders and had a punk attitude and catchy songs. Their song, “Coffin Cruiser” ranks high on my list of favorite songs and it still gets regular play at my house.  My appreciation for this fine band and the fact that I’m a nerdy record collector type led me at some point to discover that the singer/guitarist from The Skulls, Charly Pip, was in some prior bands from the New  York/New Jersey area and one of them was The Bees.

I can’t recall what it was that alerted me about the existence of The Bees, if I had to guess it may have been something as simple as an eBay auction for a Bees single and the seller writing in the description that Charly Pip from The Skulls played in the band. What happened next was I ended up buying up any Bees records I could find, which wasn’t many as they only had three 7″ singles out and then they broke up. I found the first two and didn’t even know at the time there was a third until I found the one I was missing last year while digging through a used record store and finding a copy of The Bees final 7″. To say I was stoked would be an understatement. It was like finding a needle in a haystack and I was ecstatic.

The Bees didn’t sound like The Skulls at all. They were more of a power pop/new wave type band. All three of their singles came out in 1979. They all had black and white sleeves and very little information as to who was in the band and what they did. Few people I know even knew who that band was. Finding out about this band and finding those records was like finding some obscure buried treasure. I figured more people needed to hear about this band so they wouldn’t be forgotten or overlooked forever and it made me want to resurrect this feature of the site. Through the magic of the internet I was able to track down Charly Pip and we was willing to share a bit of history on The Bees. Here’s what he had to say:

The Bees existed in the short space of one year. Myself and Brian”Dukey”Austin (R.I.P.) began to hang around in Somerset and New Brunswick spring 1978. We were practicing and writing at the Shirley Parkway Hellhouse in Piscataway. John Hawk McLaughlin, his girl, Lonnie, and Freddie G (R.I.P.) all lived there. Brian wrote, “A Boy Called Distress”, “Napalm Baby”, “Large Girl”, and I wrote “Top Forty”, “Ruby”,and “Circuit Breaker”. We tried to lure Fred into the band but he and John were in a cover band called Jet Mule. We found Dave Hall on the drums,who fortunately worked at Jem Records. The daily jamming brought Freddie in and we were originally a punk quartet. Fred wrote “Mystery Date”, and “Jump Up”, and after we gained some chops we found the basement of the Red Fox in Somerset unused by the owner, Billy .The Bees played The Cellar every Thursday for the next nine months,gaining a huge following. We eventually added Matty Hahn on keyboards, to which I objected but later found him a great vocalist and the classic three part Bees harmonies were formed. Brian got married and messed up so The Bees dropped him and moved forward. Two more singles, a bus and crew, 20 gigs a month, a full PA, and light show and eventually many New York shows. We had opened for DJ a few times and he had his eye on Fred for guitar. I talked to him at Hurrah and we hit it off, so Fred and I decided after much worry to join David and see what happened. In retrospect, Matty and Dave formed The Bounce and Freddie passed away in NYC. I joined The Colors and the rest is history, but I now state The Bees was the most productive, Lennon/McCartney active unit I’ve ever worked in. In less than one year we played 167 gigs, released three singles and wrote 41 original songs. A golden era!!!

Charly Pip was not only kind enough to write-up this little history on his former band but he gave me permission to post one mp3 from each single for the world to hear. Hopefully it will expose more people to their great music and prompt someone to at least reissue these great singles digitally so they aren’t lost forever.

Obey My Brain Records #BE1

Listen to “Mystery Date” from the record

Obey My Brain Records #BE22

Obey My Brain Records #BE333

Listen to “Already in Love”

These days, Charly Pip is as active as he ever was and is constantly touring with his musical projects. The Skulls morphed into World Famous Skulls and still play often.  You can check them out at their website and their facebook page. You can listen to some of their music at their Reverb Nation site.

Back in the early 1990s, I spent a hell of a lot of time going to shows at Lounge Ax in Chicago. That place was one of the best clubs ever in the world and at that time they were getting the coolest bands. During the...