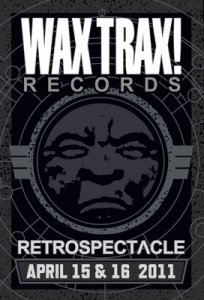 There was a time throughout most of the 1980s and partially into the 1990s that Wax Trax Records in Chicago was arguably the greatest record store on Earth if you were into punk rock, industrial, new wave or any sort of alternative music. I used to save up money for weeks to spend at the store on records I could never find anywhere else in the Chicago area back in the early to mid 1980s when I was a teenage punk rocker who spent every penny I earned on records and still wanted more. Then when all that “youth crew” nonsense came in and ruined punk rock, I got into the industrial music scene just as it was really taking off and Wax Trax was the center of that universe. Not only did they stock all that music in mass quantity, the Wax Trax label put out almost all the best bands of that genre not named Skinny Puppy.

The label had an impressive roster of the best in industrial music in the late 1980s including Front 242, every Minsitry side-project like Pailhead (still my favorite) and 1000 Homo DJs, they had the Young Gods (perhaps the most under-rated band from that whole scene and the most unique), they even put out my favorite album of all time from Doubting Thomas (which was a Skinny Puppy side-project). Tack on My Life With the Thrill Kill Kult, Revolting Cocks, Front Line Assembly, KMFDM and more and you get the picture. Wax Trax was industrial/electronic music!

Sadly the store and the label ceased operations in the 1990s,  co-founders Jim Nash and Dannie Flesher passed away and a Chicago institution became just a warm memory in people’s minds and the rights to the music the label released got scattered across the universe but for one weekend this coming April, Wax Trax will be resurrected for a very special event. Here are the details:

In honor of the 33 1/3 year anniversary of Wax Trax! Records and the legacy of its creators Jim Nash & Dannie Flesher, The Nash family is producing a 2 night multimedia concert event that will celebrate the legendary Chicago record label and store on April 15th & 16th.  The event will feature friends & artists of the Wax Trax! label and store including Front 242, My Life With The Thrill Kill Kult, Luc Van Acker, Paul Barker, Chris Connelly, En Esch, Guenter Schultz, Raymond Watts, Rights of The Accused and more. In addition to the live performances, there will be special guests as well as an all-star cast of Chicago DJ and VJ’s to commemorate the label and store. Tickets go on sale this Saturday at noon, and proceeds will benefit Center On Halsted.

This landmark show is being produced by the Nash family and friends and will honor the influence of Wax Trax! as well as Jim and Dannie. Even before Metro opened in 1982, the venue’s owner Joe Shanahan enjoyed a close relationship with the label and store, one which would result in many joyful nights in Metro in the years to come – Metro is honored to host this once in a lifetime event.

Wax Trax! was not only a ground-breaking music label with an international roster and reach, but also a cultural hub for thousands of Chicagoans and visitors throughout its existence. Jim and Dannie originally started Wax Trax! Records in Denver in 1975, with an emphasis on selling underground and imported music. After relocating to Chicago and opening the Lincoln Avenue store in 1978, it quickly became the heart of Chicago’s emerging punk and art scene. In 1980, after releases from Chicago Punk all-stars Strike Under and international trash-diva Divine, Wax Trax! Records began to solidify their place as electronic pioneers with the addition of  Al Jourgensen and Ministry to their roster. Throughout the 1980’s Wax Trax! continued to release ground breaking artists and has been credited around the world as a principal innovator in what has come to be known as “Industrial Music.”  The influence of the label and store touched countless bands, venues, promoters and music fans. Both Jim Nash and Dannie Flesher have since passed away due to complications brought on by AIDS, Jim in 1995 and Dannie in 2010.

Proceeds from the event will benefit Center On Halsted, the most comprehensive Lesbian/Gay/Bisexual/Transgendered community center in the Midwest. Their mission is simple – in a safe, nurturing environment, The Center On Halsted serves as a catalyst for the LGBT community that links and provides local resources and enriches life experiences.  As Wax Trax! provided throughout its history, the Center On Halsted serves as a meeting place for like-minded people who, too often, find themselves disenfranchised or disconnected from the “mainstream”.

Tickets for this two night event go on sale this Saturday at noon for $60. A special $500 VIP package includes 4 tickets, reserved seating and limited edition posters.

Julia Nash has just put up a website documenting all things Wax Trax that is well worth a visit. Check it out at www.waxtraxchicago.com.