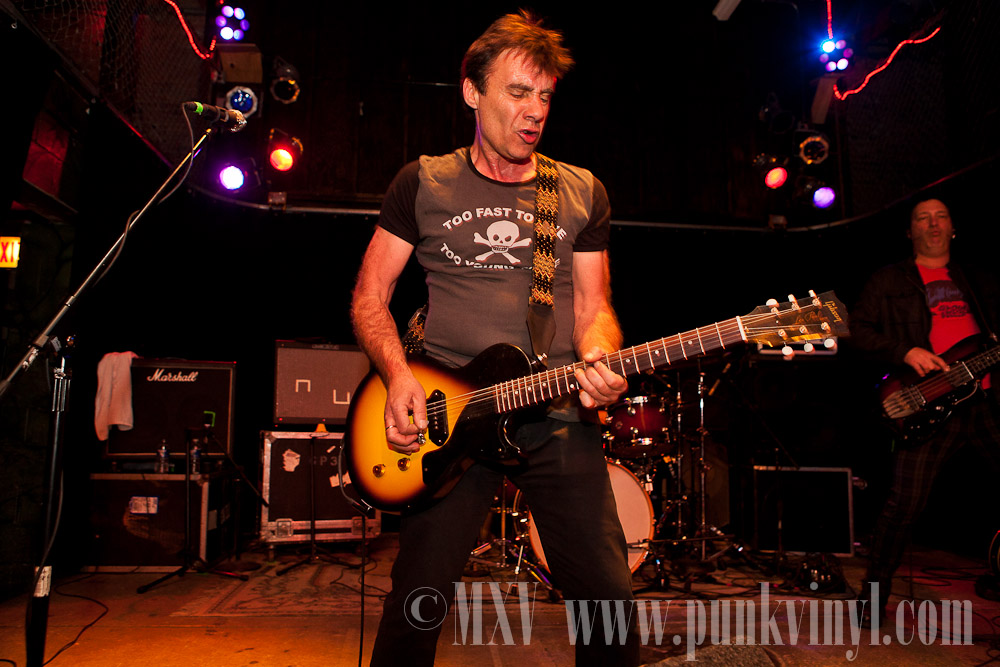 Thursday night three legendary musicians from different bands joined together at Reggies for one evening to bring the music from their respective bands to a room full of older fans. Glen Matlock from the Sex Pistols, Hugh Cornwell from The Stranglers traded sets, both being joined by Clem Burke of Blondie on drums.

The Handcuffs played first. They had three ladies and two guys in the band. They played a sort of new-wavish rock and roll with mostly mid-tempo songs. Their drummer was super charismatic and got a great sound out of such a basic kit, all while twirling his drum sticks around and even making them disappear like magic tricks. The lead singer had a great voice and a great attitude and their songs were really catchy and fun. They easily won over the entire audience who wanted them to play more when they completed their excellent 45 minute set.

Glen Matlock quickly followed. He was playing guitar and singing and had a guy on stage playing bass with him as well as Clem Burke playing the drums. He seemed to be in a good mood and was quite chatty between songs. He played a mixed bag of solo material as well as a few Rich Kids songs. He also played two Sex Pistols songs, “God Save the Queen,” and “Pretty Vacant”. While his vocals on both pale in comparison to Johnny Rotten’s, he did a fine job and it was neat to see a Sex Pistol on stage playing those songs, both of which really pleased the crowd. Glen’s set was rockin’ and a lot of fun and the crowd loved it.

Hugh Cornwell took the stage next with the same bass player and with Clem Burke on drums. He played a “Stranglers sandwich” that consisted of two Stranglers songs and a new song in between. From there it was on to a ton of his solo material including two brand new songs that will be on his forthcoming album he’s recording here in Chicago. The new songs were quite entertaining and catchy in a bit of an off-kilter way. His solo material is quite diverse and the result was a really solid rock and roll set that ended with a handful of Stranglers songs that really got the crowd excited. His hour-long set went by really quickly and was a great cap to a great evening of rock music that was well worth staying up late for on a weeknight.