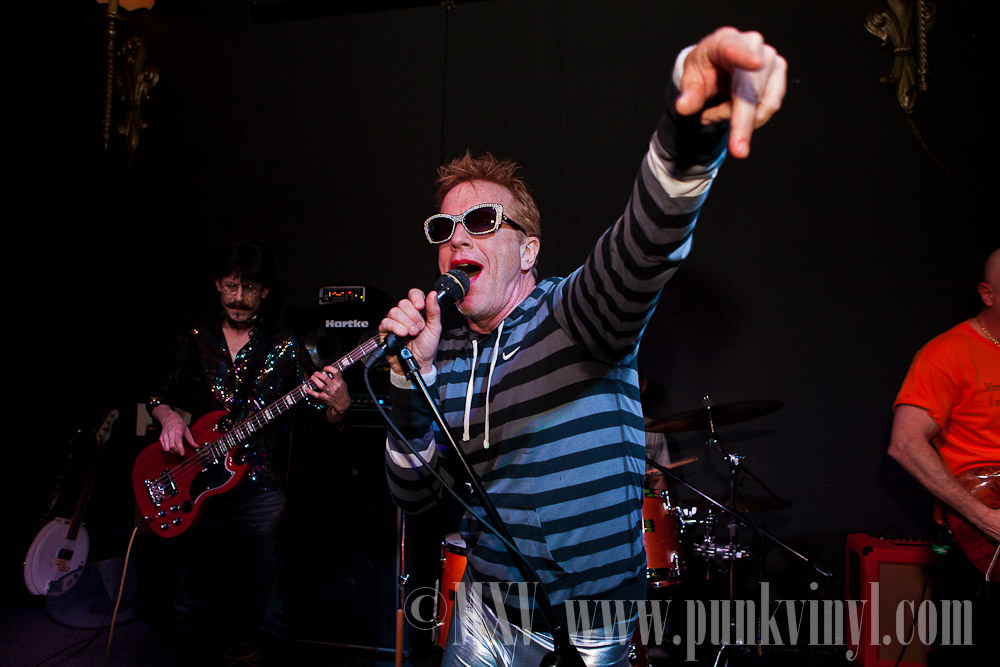 Tutu and the Pirates, The Mentally Ill, Clawtoe, Hotlips Messiah 3/16 at Brauerhouse

Friday night an excellent show that happened recently in the city made a return appearance with the same lineup out here in the Western Suburbs. The venue was the Brauerhouse in Lombard and the lineup was Tutu and the Pirates, The Mentally Ill, Clawtoe, and Hotlips Messiah. All the bands put on a great performance at the Ultra Lounge a month or so back and they all joined forces to see if lightning could strike twice.

This time out, Hotlips Messiah played first. They put on a similarly excellent performance to the last show, but this time they played one of their crown jewels, “Mutants Unite” as well a new song which was equally excellent. Traci Trouble was bouncing around the entire set and often walked out into the crowd to sing right next to people. The band seemed a little more inebriated than the last time but the bit of sloppiness that resulted from it didn’t spoil the performance and they really should have been played second like they did last time, they are too good to be the “curtain jerkers” of any show.

Clawtoe was next. They played pretty much the same set in the same order as the last time out. Some of their songs, especially the last two, were really good with some interesting and varied guitar work (one had a particularly cool effect on the lead while the rhythm guitar played something totally different and it blended well). Their more post-punk styled songs is their strong suit. Their cover of The Damned’s, “New Rose” should be ditched from their set immediately. They get points for trying to put a new spin on it, but it simply doesn’t work. Overall they show promise and if the singer tweaks his vocal delivery in a couple of the songs to give the vocals some more life, they will really be onto something.

The Mentally Ill quickly followed. They played their usual set of quirky and abrasive punk rock with the most sick guitar sound imaginable. They were pretty tight and energetic and their songs sounded great. They randomly threw out a couple of t-shirts to the crowd in between songs and the crowd was definitely into them. About 2/3 though their set it sounded like the singer blew out his voice so they fast-forwarded to “Gacy’s Place” and one other song and called it a night. Despite that, they were as great as always and it’s a real treat that these guys are playing sporadic shows around here, something that hopefully won’t end anytime soon.

Speaking of bands that play sporadic shows around here, Chicago’s first and one of their all time best punk rock bands headlined this show again, and that was Tutu and the Pirates. Little Richie Speck came out on stage in spandex pants, big gaudy sunglasses, and wearing lipstick. Their new guitar player was wearing the “cone of shame” and Mel Torment had a giant plastic nose. They opened with “No Head From Darlene” and they had even more energy out of the gate than their last show despite the fact they were playing to a smaller crowd this time (apparently no one from the city can be bothered to make the trek out to the suburbs for a great punk show). Those that were in attendance were bouncing along to the songs or even singing along. They followed it up with, “Delinquent Rat” and the super energetic, “Son of Sam”. The band sounded amazing and it was impossible not to have fun and smile during their entire set.

Little Richie Speck is still one of the most entertaining and charismatic front men in all of punk rock and he was on top of his game, as were the rest of the band. The between-song banter was easily as entertaining as the music itself as the band busted out their staples including “Anarchy Man,” “Berlin,” I Got Zits,” and more. They also played their newly written song they plan on releasing on an EP in the future and it is easily one of their best songs ever! They need to release it immediately, if not sooner.

The band ended the main set with “I Want to Be a Janitor” and Frankie Paradise strapped on the trademark toilet seat bass and during the break/solo he opened it up to receive Richie’s plunging. That got a pop from the crowd as always and then they brought the song to a close. They finished the night with one more song, “Boiled Alive” which is a bit of a spoof on “Stayin’ Alive” and they had Traci Trouble from Hotlips Messiah join them on backup vocals. It was a fun way to end a perfect Tutu set and an overall really fun evening of punk rock on a beautiful spring night. Those too lazy to make the journey out to Lombard for this show should be ashamed of themselves as it was easily the best thing going that night.


Tutu and the Pirates