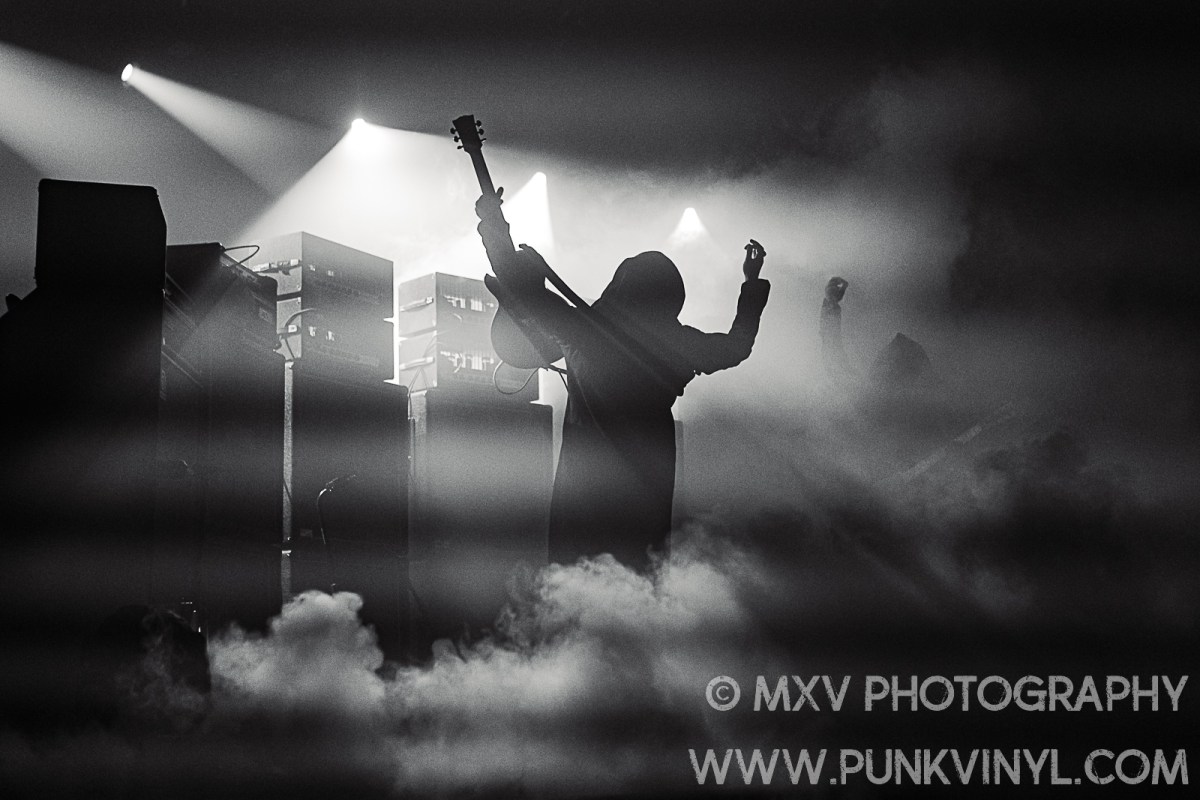 Tuesday night, Thalia Hall was packed near capacity with eager music fans looking to wrap up the year with a performance by the legendary Sunn O))). They had a couple of great local acts on the bill with them and it was a great reason to go out late on a weeknight.

First up was Deep Tunnel Project. This is a relatively new band that features John Mohr and Mike Greenlees from Tar, along with the “man of 1000 bands”, Jeff Dean and Tim Midyett from Silkworm! It’s hard to not make comparisons to Tar when you have 50 percent of the members in your band, and one of those members is also the singer to both bands, but try to imagine a band in that style with some added melody to the songs. Great, loud, layered guitars by Mohr and Dean, John’s trademark vocals, and great mid-tempo energy. These guys sounded great and hopefully they release a record soon. If you have a chance to check them out they are well worth going out of your way to see! Fantastic!

Next up was Ready for Death. This band played thrash/metalcore/hardcore complete with all the bells and whistles you’d expect like double kick drum, super fast guitar riffs, and growling, throat full of glass vocals. Their songs were fast and super aggressive and many of them sounded pretty similar. They weren’t breaking any. new ground in their chosen genre, but they were good at what they did and had a lot of energy.

There was a wall of amps in the shape of a semi circle that filled the entire stage when the two members of Sunn O))) took the stage. They were wearing cloaks and had hoods on so you couldn’t really see them, they were just these dark druids ready crush the audience with their guitars. The stage immediately filled with so much fog you couldn’t see anything but the blinding white lights illuminating the stage. Then there was more fog, and then more, and then even more! The fog was non-stop. It filled the entire room, I am talking that there was so much fog, you couldn’t see the audience behind you! When the band started hitting those guitars, the entire room was rumbling like an earthquake. They stood fairly motionless on stage, and were very slow and deliberate in their guitar manipulation, squeezing every second of tone out of everything they did, taking their time to let the tones bend and flow. It was non-stop low end droning. There was no vocals, there was no indication of a song starting or stopping, they simply crafted this intense ambient sound for the next 90 minutes.

As the band was playing, the room never stopped being filled with fog and the lights rarely changed except to strobe or flash, and only later did they even change colors briefly. The smoke detectors were constantly going off during their performance because of the fog, but the strobing lights around the club from them only added to the visual and aural spectacle that was happening. The wall of sound was so loud and intense that plaster was crumbling and falling from the ceiling their entire set! It was like some otherworldly religious experience of avant-garde experimental drone and doom metal. The entire audience did not move, they were mesmerized as if in a trance. Some were filming the spectacle on their phones, others were standing with their eyes closed soaking it all in, and some were staring wide-eyed in amazement, all while huge clouds of fog went billowing through the entire venue. It was the most silent and motionless crowd I’ve ever witnessed, because they were all completely hypnotized by the spectacle and the wall of sound made you powerless to move, you just succumbed to it knowing that this was an amazing experience to hear and feel.

When the band finished playing, the fog lifted and they removed their hoods and took a bow and received a massive round of applause. It was 90 minutes like no one has ever seen or felt before and the audience left the venue completely in awe of what they had just experienced. It was truly a special evening.