As you may know, the Sex Pistols – Spunk album was finally given an official release on LP/CD last year. For those not familiar with it, about a week before Never Mind the Bollocks came out, some crafty bootlegger beat it to the punch by releasing an album of earlier Sex Pistols demo recordings. The songs on this were different versions of many songs that ended up on the aforementioned album and also featured Glen Matlock playing bass (though Sid was credited on the Bollocks LP, he didn’t play on it, Steve Jones played the bass lines on a down-tuned guitar!). The recordings had since found themselves on countless bootlegs as well as even being included on a bonus CD included with an overseas release of Never Mind the Bollocks.

Since its release a year ago, the LP version has already been pressed on four different colors of vinyl (black, white, pink and now green), but now it has been released in yet another variation, this time as a 7 inch box set. 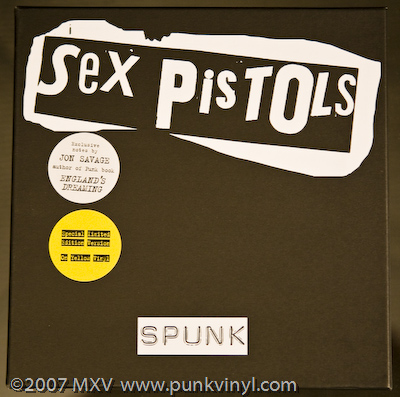 The set contains seven singles; the first six comprise the Spunk release featuring one song on each side. The records are housed in white sleeves with the band logo printed on them. The seventh record features three songs not found on the LP/CD; “No Fun (unedited version)”, “Anarchy in the UK (demo)”, and Pretty Vacant (demo)”. These recordings have been released elsewhere but are very appropriate for this collection. 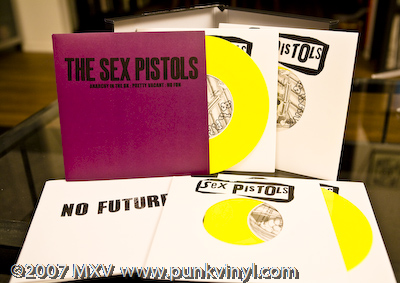 The set also comes with a booklet that features some nice liner notes as well as various photos and clippings about the band, something that didn’t come with the LP/CD version. It’s a pretty attractive package overall for vinyl geeks such as myself, though it comes with a pretty hefty price tag.

As if the LP variations weren’t enough to keep up with, not to mention being a drain on the wallet for hardcore collectors (aka: completists), there are already two variations of this box set right from the start; the standard black vinyl and a yellow vinyl that is a limited edition of 250 copies. I think the yellow vinyl may be a store exclusive in the UK by Sister Ray, which is where I got mine. They were the ones who had the exclusive white vinyl version of the LP. Sick as I am when it comes to record collecting, I opted only to get the color vinyl version and not shell out the same price again for a black vinyl version, hell even I have to draw the line somewhere!