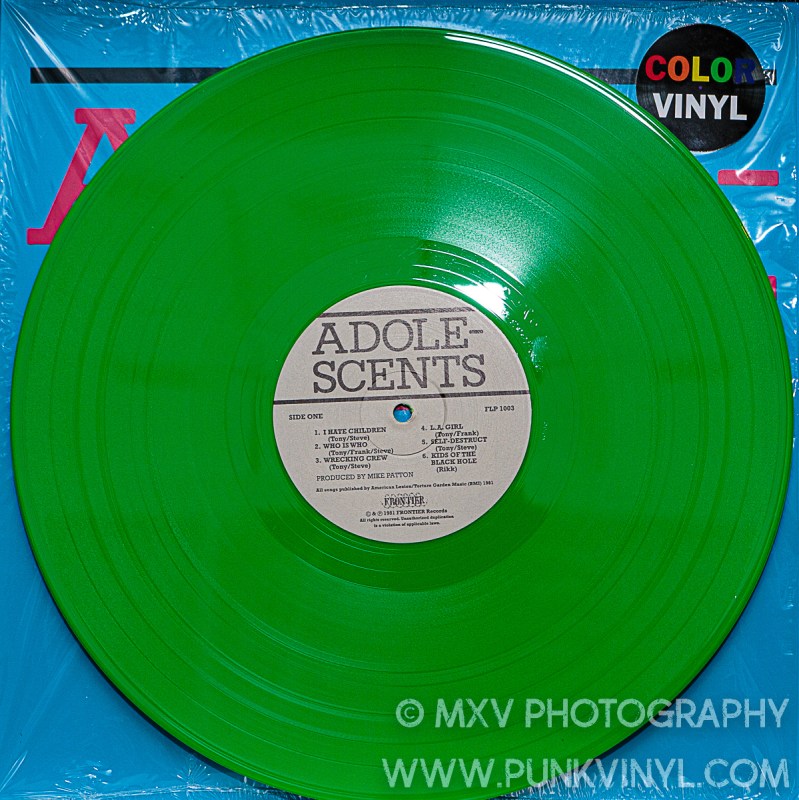 As we continue to catch up with the recent runs of colored vinyl punk classics on Frontier Records, we now get to the first Adolescents album, affectionately known as the “blue album”. Is there any readers of this site that isn’t familiar with this legendary band? This album was the blueprint (no pun intended) for the OC punk sound that became famous in the early to mid 1980s. This is another one of those all-time great records that should be in  every home.  The album as come out on a few different colors of vinyl in the past year or so and here’s what’s happened since the last feature on this album. 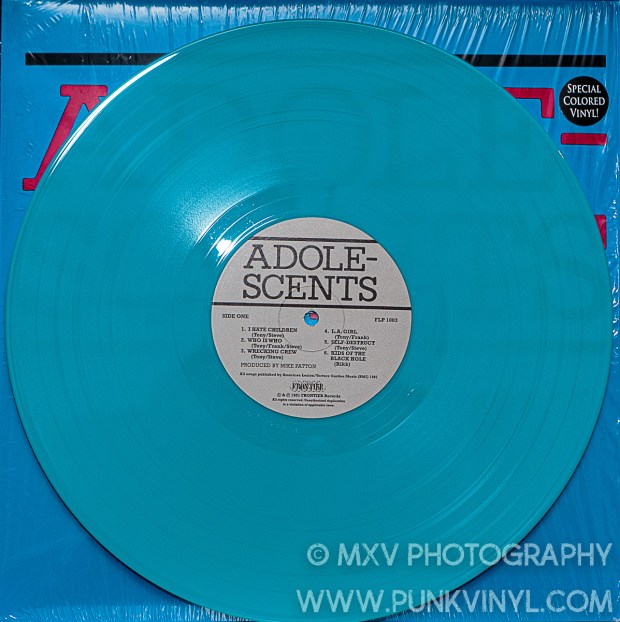 First up we have opaque aqua vinyl. It’s a nice, solid light blue that you don’t see used a lot. Like all of these colored vinyl editions, it comes with a lyric sheet. This one was limited to 1000 copies. 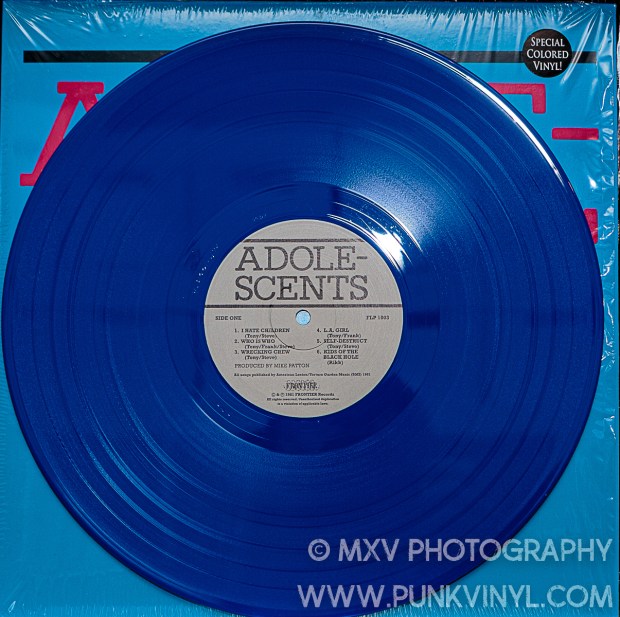 Next we have opaque blue. This one was pressed at Furnace, which is where all the Frontier Records are being pressed at these days since Rainbo closed its doors forever. This one is also limited to 1000 copies. 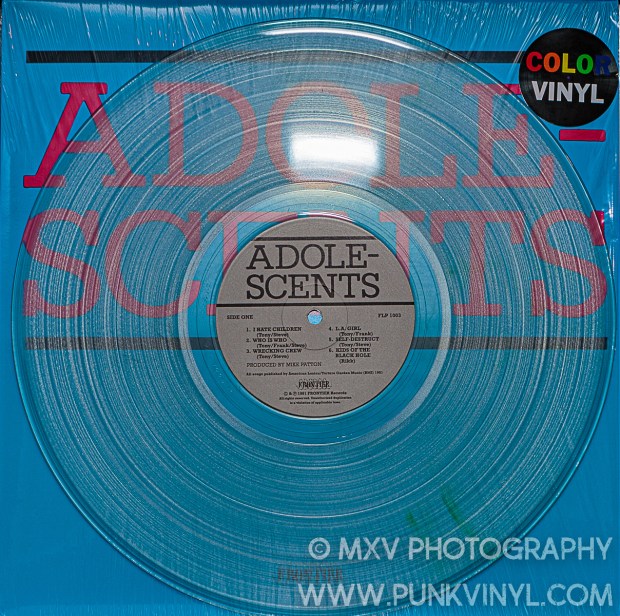 The fancy sounding, crystal vellum colored vinyl is next. It’s really just a cool name for clear vinyl. This one is also limited to 1000 copies and has a different and larger colored vinyl hype sticker on the shrink wrap. 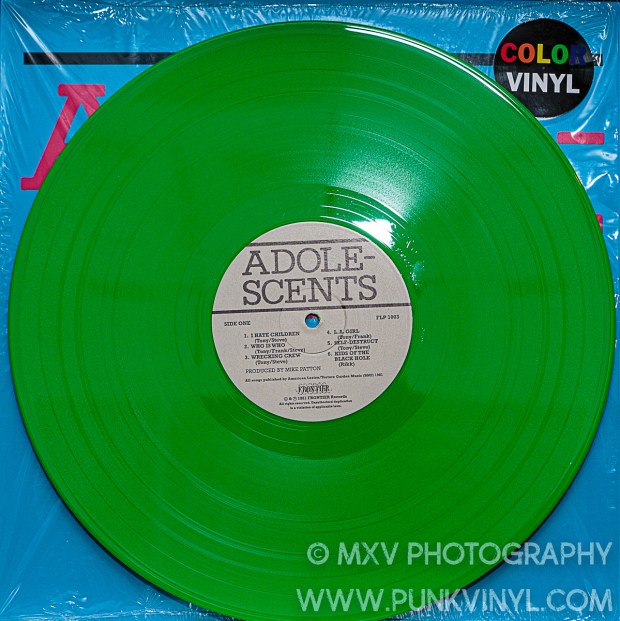 Leaf green vinyl is one of the most recent variations. This is a really cool looking opaque green. It also has the new style hype sticker and is limited to 1500 copies. 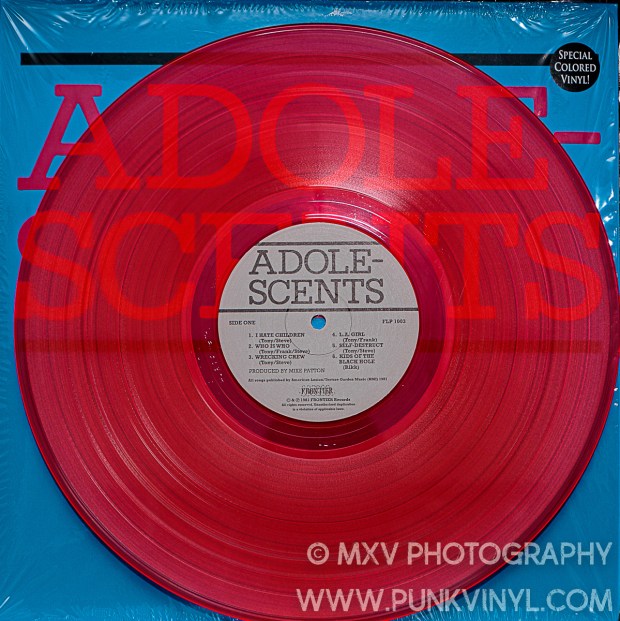 Last but not least is translucent salmon vinyl. This one looks really neat in person, the photos can’t do it justice. It is almost fluorescent colored and you don’t see many records coming on this color, maybe it is new? Either way it is awesome and it is limited to 2000 copies.

Most good record stores these days should carry this album, if not you should probably stop shopping there. If you’re looking for the quickest path to get a certain color delivered to your front door then look no further than the Frontier Records website and the lovely ladies there will hook you up!