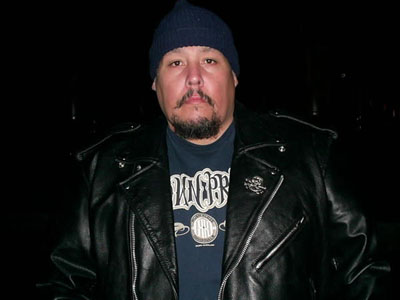 It is with a heavy heart that I have to report that Mario Valencia, best known for being a member of the Flower Leperds, passed away last week.

In the 1980s the Flower Leperds were among the many bands living in Hollywood and recorded a bunch of material for Mystic Records. The band just so happened to be my favorite band ever to record for that label. I lobbied for a few years to Doug Moody to reissue the Flower Leperds material on a CD. I got my wish but it came with the catch of having to do the work entirely by myself.

In the couple years I worked on making this happen, I managed to track down a few of the old band members and Mario was one of them. He was extremely kind and more than willing to participate in the project. In fact he seemed pretty flattered that I went to the trouble to make the reissue happen. He even wrote something for the liner notes at my request and when I sent him the finished product in the mail, he wrote me to tell me that he was excited to be holding the disc in his hands and at the prospect of people being able to hear his old band again.

I had planned on visiting CA again this winter after the holidays and among the things on my list of things to do, meeting up with Mario and the other Flower Leperds members in person was at the top. Sadly I will never get to meet Mario now, who made some really great music that meant a lot to me growing up and who through email communications I got to know a little bit, enough to know he was one of the good guys and he is going to be missed.

Rest in peace Mario, I’m sorry we never got to hang out in person, and I will always be grateful to you for making music that had such an impact on my teenage years and also for the time you took to help me get that music back out there for a whole new generation of people to hear. My condolences go out to Marios family and his friends for their loss.