In what makes me feel really old and I didn’t even get the record until about seven years after it was first released The Weirdos – Destroy All Music 7″ is now 30 years old! To celebrate this milestone, Bomp Records have released a new Weirdos record. 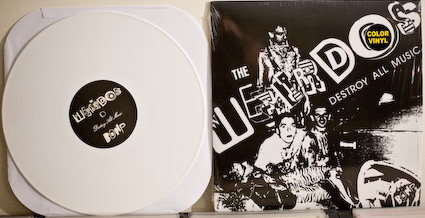 This LP compiles the original Weirdos Destroy All Music 7″ along with the Who? What? Where? When? Why? LP. It also contains four unreleased demo tracks that are exclusive to this release. It comes on limited edition white vinyl, or you could get it on CD if you were so inclined. Considering that except for the demo tracks, everything on this can be found on the Weirdos collections on Frontier Records, this is probably only of interest to hardcore Weirdos fans and record junkies such as myself, but I know I’m not the only one out there like that so I’m sure it will do alright, at least in the vinyl format.

I’m sure the usual record stores and mail orders have this or get one direct from Bomp.