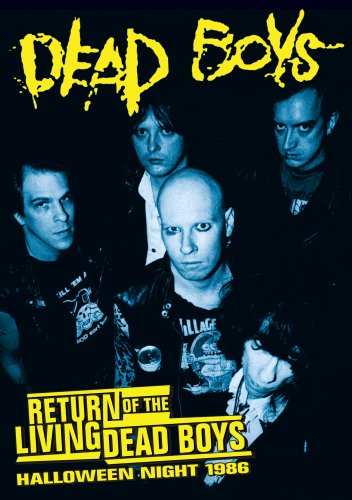 In the 1970s, the Dead Boys were among the first punk rock bands in the United States and they also rank among the best. They only put two albums out before breaking up and moving on to other things so they never stuck around long enough to go sour or tarnish their legacy, if anything they broke up too soon and left people wanting more.

In 1986 the people go more in the form of a few reunion shows and an EP of new studio songs. The EP was good, and after seeing this DVD I can say the reunion show was even better. This DVD documents the reunion show they did at the Ritz in New York City on Halloween 1986. They played nearly everything you’d want to hear from them, including opening and closing the show with “Sonic Reducer”!

The show starts with Joey Ramone introducing the band and they tear into “Sonic Reducer” and from there they play song after song with some banter and stopping between songs. The performance itself was top-notch, you’d be hard pressed to think they had been broken up for years before this show.

The show was shot on one camera that was a fair distance from the stage. It had good zoom though. The footage isn’t the best but it’s not awful either. If you were ever a bootleg video trader back in the day you’d know what to expect. When the camera is zoomed in (which is most of the time) you can see the action good, but when it pulls all the way back it is pretty far and a bit blurry. The sound is pretty good with a couple of quick dropouts here and there but nothing major. Since this stands as the only document of their reunion and another one is impossible it’s way better than nothing.

The show is about 40 minutes long. Bonus footage consists of a “Sonic Reducer” video and Stiv Bators TV interview which was a pretty amazing relic to dig up. If you are a hardcore Dead Boys fan, you might want to pick this up as any footage of this band is a rare thing to find. If you’ve never heard the Dead Boys before you might want to start with picking up their records first as your initiation to the band but it is certainly good that this rare footage was preserved.

Order this DVD from amazon.com