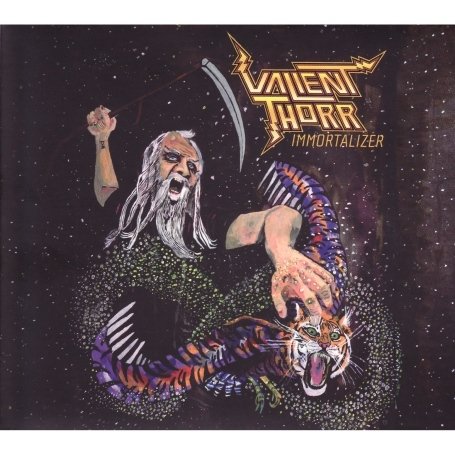 When I saw Valient Thorr last winter, they totally won me over with their amazingly energetic rock tunes and their fun attitudes. These intergalactic rockers from Venus by way of North Carolina transplanted me in time to the 1970s when rock and roll was rock and roll and the songs had some substance. I immediately bought all their albums and vowed to go and see them play again.

For their first album in well over a year, Valient Thorr took all the ingredients that made their previous albums so good, added a bit more metal seasoning and turning the whole thing up to 11. The basic structure of their music is grounded in 70’s rock, and sprinkled in there is tiny bits of metal and the attitude of early punk with a little southern twang.

Songs like the lead track, “I Hope the Ghosts of the Dead Haunt Yr Soul Forever” immediately grab the listener with its catchy guitar leads that make you stand up and take notice. “Tomorrow Police” harkins back to the early punk days with its lyrics dealing with the wrongs of “the system” and corrupt cops. “No Holds Barred” is an ode to wrestling including a section where Valient Himself starts reciting a whole slew of wrestling holds which I as a wrestling fan got a big kick out of not to mention the song itself is super catchy and energetic.

The whole album is a pretty entertaining listen from start to finish and a great follow up to their last album, which was a great rock album. This time out they recorded with Jack Endino who is no stranger to being at the helm of bands with a classic rock influence, as he recorded so many of the Sub Pop records back during the “grunge years”. I can only imagine that these songs are even better live, but until I get to witness them being played in person again, this album will be enjoying regular plays on the old iPod.