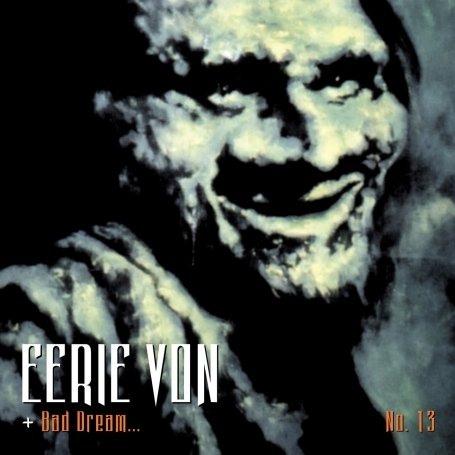 For those of you who may not know who Eerie Von is I will explain. Eerie Von was the drummer for a relatively obscure New Jersey hardcore band called Rosemary’s Babies and was also a huge Misfits fan and friend to Glenn Danzig. When Glenn disbanded The Misfits and started Samhain he enlisted Eerie to play bass for them. When Glenn disbanded Samhain to move onto the greener pastures of a major label under the moniker Danzig, Eerie Von was the only Samhain member to come along for the ride. Eventually Eerie parted ways with Danzig and has released a couple of solo records, this being his second one (the first being one he did with Mike Morrance).

Bad Dream No. 13 is a huge departure from the demented orchestra music Eerie and Mike Morrance created for his first CD. The music on this album wasn’t like anything I expected, it sounds a lot like some sort of music you’d hear at some broken down biker bar in the deep south. Though no computers were used, a couple tracks have a sort of industrial skeleton to them of the repetition and sound but sans the samples and keyboard noodling. The vocals are very deep and sound like a cross between Johnny Cash and Ian Curtis and overall the songs are sort of bluesy and part country in many songs. Not many of the songs sound the same on here but they all have a similar mood to them which is sort of somber and quiet.

The use of guitars is fairly minimal and the bass seems to be the most commonly used instrument (along with the drums). There aren’t loud distorted power chords of any kind, instead the music sounds very “mature” and is much more passive than confrontational. Fans of Eerie Von’s previous bands may not find what they are looking for with this CD but for those with an open mind looking for something completely different from the norm may find some worthwhile listening with this CD.