When Devo released their first album in 1978 I was nearing the end of my run in grade school and would be a couple years away from discovering punk rock, that didn’t prevent me from discovering Devo though thanks to their single, “Whip It” which I spent my $1 allowance on one week to buy the 7″ vinyl of back when I was in sixth grade.  I eventually got around to picking up some other Devo records in the years that followed and soon came to appreciate their quirky synth-driven new wave style of music. Devo were kind of a bridge between punk and new wave that both sides of the fence seemed to enjoy and appreciate, myself included. I never got a chance to see them play however, back then I was too young and then as I got older I missed their shows for one reason or another. I finally got to make up for that last night and I couldn’t have asked for a better way to see them.

After a lengthy hiatus, Devo returned to Chicago to do a pair of shows at The Vic Theater. These weren’t just regular shows, they were special shows to honor the reissues of the first two Devo albums, Q: Are We Not Men? and Freedom of Choice on both deluxe remastered CDs (or digital downloads) and colored vinyl. The first night they’d play the entire first album and the second night, they’d play the entire second album.  Since their first album was my favorite of all their material, that was the one I had to see.

When I got inside the venue, JP Inc was about halfway through his set. He was a musical comedian who sang goofy songs while he had images corresponding to them being displayed on the screen above his head. It was amusing for a few minutes but a full set of that would have been too long to hold my interest so I was glad I came in half way through. 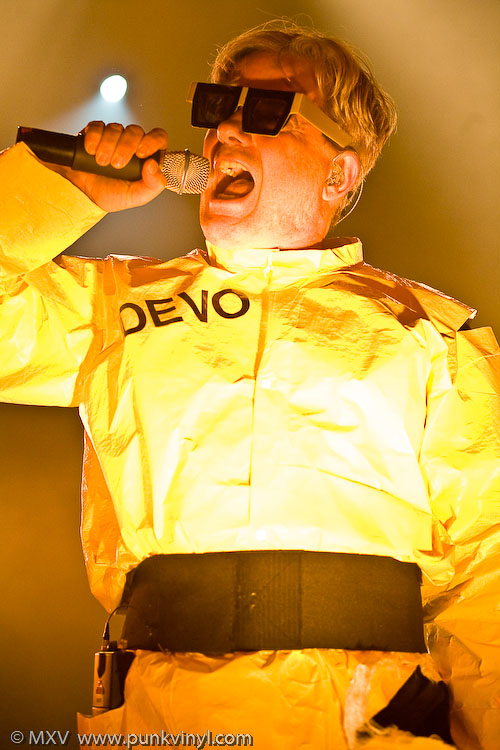 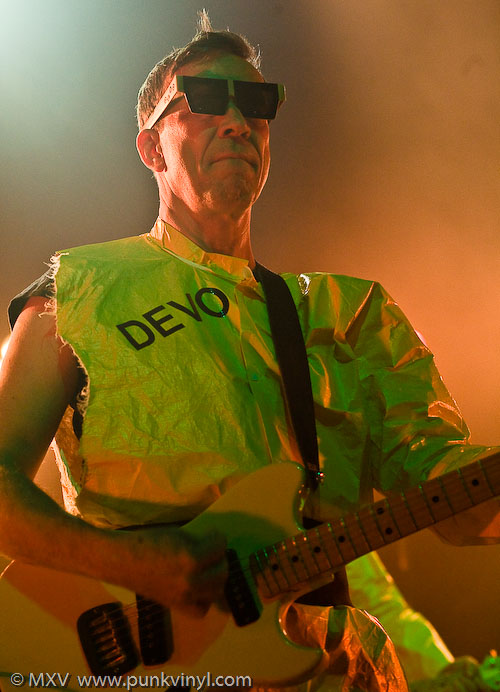 After a lengthy preparation and setup which included 20 minutes of trying to get their video screen to work, Devo ended up taking the stage sans-video introduction (just the audio worked).  The stage was covered in black plastic and surrounded by flashing light rigs that formed a circle around the middle of the stage. The drums were off to the left side of this and a platform of keyboards was off to the right.  The band came out in their trademark yellow jumpsuits and wearing 3D glasses and as the opening notes of “Uncontrollable Urge” started the people in the crowd (quite a few donning their own energy domes) were cheering and bouncing up and down and shaking their heads with delight. 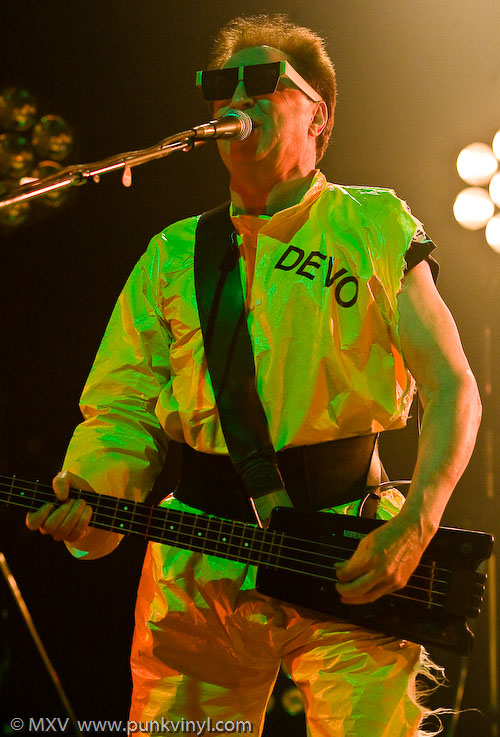 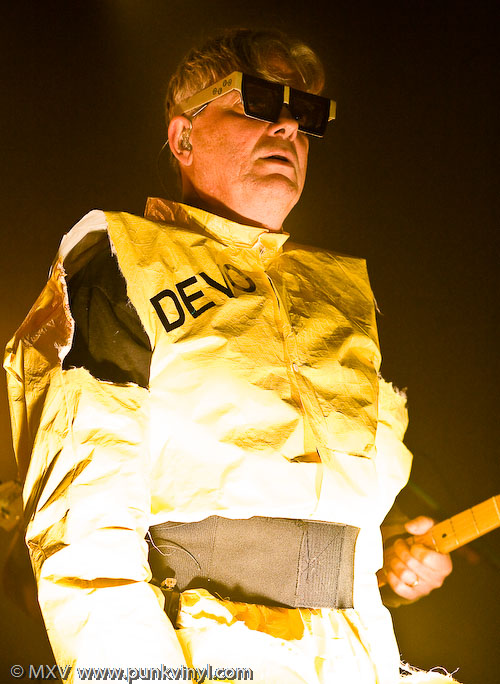 As they played through the entirety of Q: Are We Not Men in order, they eventually tore away their yellow jump suits piece by piece until they revealed the band members to be wearing the trademark black Devo t-shirt, wrestling shorts, boots, and knee pads. As they continued to play through the rest of that album’s songs, the crowd were bopping around happily, a crowd which consisted mainly of people at least my age if not older which is a big difference from most shows I go to! 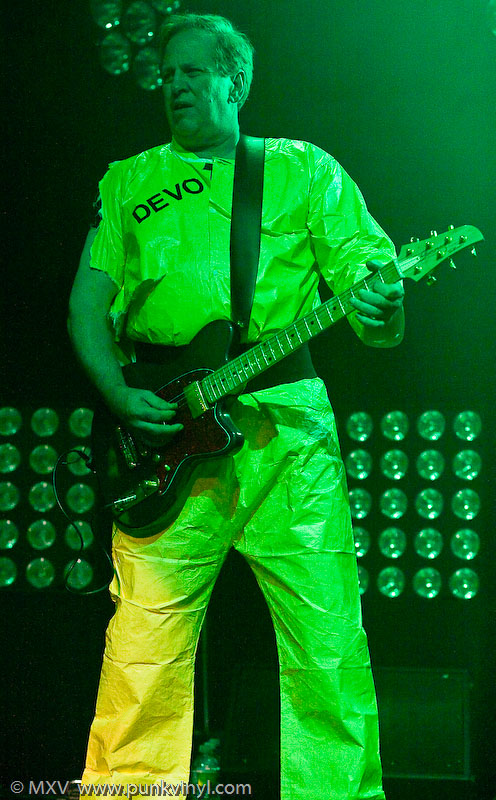 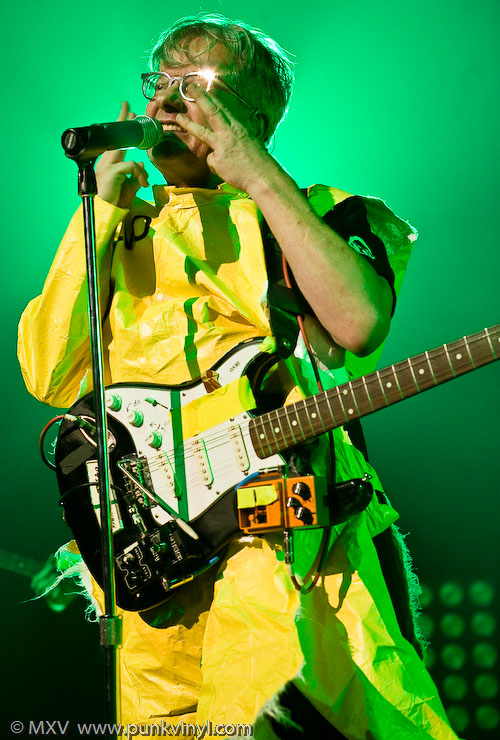 The band would talk to the “spuds” in the crowd often between songs and everyone seemed to be having a really good time. It was amazing how great the sound was that evening and this had to be one of the best sounding shows I’ve ever heard at The Vic. The band played flawlessly and faithfully re-created the Devo of 30 years ago without coming across as being old or dated, they still played with lots of youthful energy like it was just yesterday when the album was released. A pretty amazing feat for a band that has been around for three decades now! When they finished played the last song from the album, “Shrivel Up”, the band left the stage and that was the end of their main set. 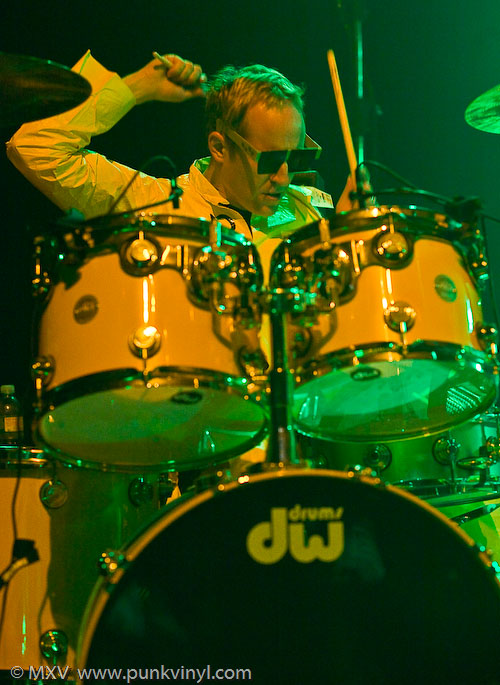 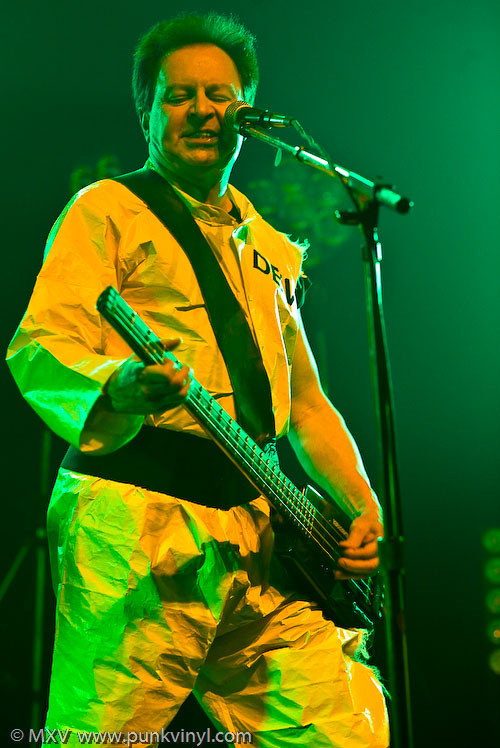 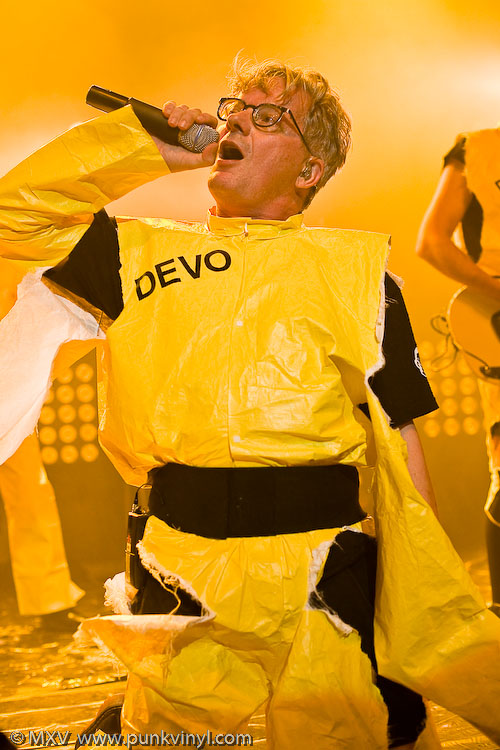 After a couple of minutes the band came out and played an encore that consisted of “Smart Patrol/Mr. DNA”, and “Gates of Steel”, the latter which had even a good portion of the balcony dancing. When they finished the lights came on and the crowd was clearly a bit bummed there wasn’t any more. I was too if only for the fact that the band was so entertaining and spot-on in their performance that I’d have happily listened to them for the rest of the night if they would have stayed on stage. On my way out of the theater I walked by the merch booth and saw a huge line of people lining up to buy energy domes and Devo t-shirts as a souvenir of a fine evening and a little memento of their youth.

You can see a few more photos over at my review for Chicago Examiner.