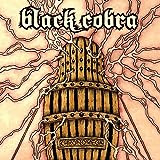 Black Cobra is a two man band from the Bay Area in California comprised of former members of Acid King and Cavity. The band released two albums prior to this one for At a Loss Recordings but for this new album they have found a new home with Southern Lord.

Black Cobra’s music is incredibly heavy and it’s hard to believe such a huge sound can come from one guitar and one drummer! If it wasn’t for the fact that I’ve witnessed them live, I’d swear that they were trying to fool the people by secretly having additional instruments in the band, the sound is really that thick!

Chronomega shows a little more maturity in the band. The songs are a bit lower and heavier at the sacrifice of some of the chaos of the earlier records. The songs feel a lot more calculated and have more direction. Even the packaging of the CD feels like it has purpose and that the whole album has a definite theme with each song having the lyrics and its own artwork which reminded me a lot of Voivod in its presentation.

The album contains nine songs, most of which are around five minutes each. The songs are as thick as sludge, a bit dirty sounding, heavy, pounding, and brutal. The music will beat you into submission in a very pleasing way and the album makes for a great and very satisfying listen from start to finish. Upon multiple listens I never once found myself skipping tracks which is a rare thing for me in almost every situation. I believe it is going to rapidly become my favorite Black Cobra album and I look forward to what the future brings with this two man powerhouse.

Buy the album from iTunes