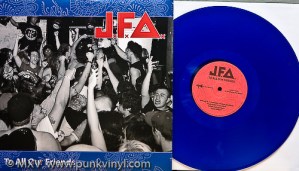 J.F.A. – To All Our Friends LP
DC Jam Records

I think the first JFA 7″, Blatant Localism, was the first hardcore 7″ I ever heard, if not the second (a Black Flag 7″ may have been the first, I’m getting too old to remember), regardless, that band of skate punks from the desert of Phoenix, AZ changed my life forever. The band has been a punk rock institution for almost 30 years now and it’s amazing and comforting to know they are still around playing shows here and there. They also nearly single handedly invented skate rock, which fueled a lot of marathon skate sessions in my high school years.

While the band hasn’t ever quit, they haven’t exactly been prolific in the second half of their career, in fact  the last two records they put out were singles I did with them on my own label, Spontaneous Combustion Records. Any time the band puts something out it is worth taking notice and is a special occasion and finally there is a new JFA record for the first time in six years.

To All Our Friends is a brand new album recorded live which gives a great representation of what it is like to see JFA play these days. It is chock full of many of their early classics and I’m happy to say they sound as good being played live today as they did back in the old days. The band gave a great performance at this show and songs like “Beach Blanket Bong Out,” “Preppy,” “”Cokes and Snickers,”, and “Guess What,” all sound killer. The two”newer” songs, “Nude Bowl,” and “Lightning Storm” also sound great, the latter may even rival its studio version. The sound quality is very good, way better than that of their previous live album that came out in 1984 on Placebo Records.

The album comes packaged on translucent blue vinyl in a standard full color jacket. The graphics and layout are both quite nice including a great live shot of the band on the back cover. Unfortunately there was no information as to when and where this album was recorded so I don’t know if it happened recently or how many years ago. The album is about a half an hour long and every song on it is a keeper.

It’s nice to see something coming out of the JFA camp after so much time, and even nicer that it is a live album containing so many of their classics. Any long time fan of the band will absolutely want to have this in their record collection and young kids wanting to hear an influential band from the past would be well suited to pick this one up as well considering of little of the band’s music is still in print.