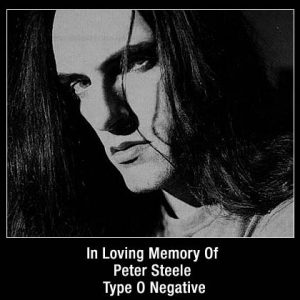 Peter Steele, singer of the metal band Type O Negative, passed away yesterday at the young age of 48. The cause of death is said to be heart failure, something that really shouldn’t happen to someone that young.

Type O Negative put out a few really great albums, the two most amazing ones being October Rust and World Coming Down. On those they seemed to really find a unique sound that blended metal and goth and sounded unlike anything at the time. Those two albums still get heavy play while driving or working over here and one of my regrets was not going to see the band when I had a chance.

Type O Negative had a rather long home at Roadrunner Records and most recently had a home with SPV/Steamhammer Records who released the band’s last album, Dead Again, in 2007. Steele may also have the claim of being the only heavy metal star to have posed in Playgirl magazine.