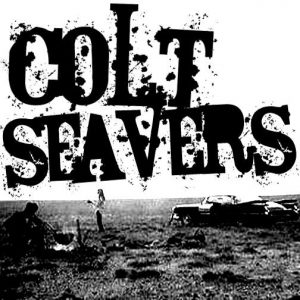 Colt Seavers is (or was) a band from the United Kingdom. They formed back in 2008 and lasted about a year before disbanding. During most of their extremely short time together they didn’t have any records out until this piece of 7″ vinyl came out around the same time they broke up which was just a few months ago.

The band played speedy thrash/hardcore in a very old school early to mid 1980s kind of way. In fact if you closed your eyes you probably would think this was some lost hardcore nugget from 25 years ago and had this come out when I was in high school, I could guarantee you that I would have worn through at least two copies of this thing and it would have been a soundtrack to many all day skate sessions.

There’s six songs on this EP, the thing is over before you know it and then leaves you wanting more, which resulted in my flipping the record over and over a couple dozen times giving it repeat play. The record gave me many happy flashbacks to my youth and it’s pretty cool to see a band of people who likely weren’t even born when I was in high school delivering such a quality and pure thrash/hardcore record that sounds timeless.

The record comes on black vinyl and is packaged in a foldover photocopied type of sleeve which really adds to the retro feel of the music. The lyrics are printed on the inside. My copy only had plain white labels so I don’t know if they are all like that or I was given a test pressing, it also comes with a download code for the mp3s of the record.

It’s a shame that Colt Seavers didn’t stick around longer, but had they perhaps they wouldn’t have remained as good as they were on this EP. This record is a living testament to the live fast die young motto as that is exactly what the band did but thankfully there’s this document of it left in their wake.