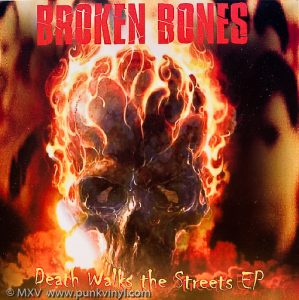 Broken Bones is a UK punk band with a very long history dating back to 1983. When they first started the band was comprised of two former members of the legendary Discharge. The band’s sound was UK street punk and they were quite influential and popular.

The band eventually went through a number of lineup changes and by the later part of the 1980s, they fell prey to the same affliction that many other bands went through at the time, they turned metal. While their metal stuff was alright for the time, I think it turned a lot of fans off. Eventually the band splintered apart and called it quits.

After an eight year hiatus, the band did what so many other old punk bands did, they reformed and decided to return to the style of music that brought them to the dance in the first place to the delight of old crusty punks everywhere. The band put out a couple of records since they got back together and Death Walks the Streets is their latest offering.

The band seems to have found a happy medium between their older punk sound and their metal era with this EP. The three songs are fast and mostly street punk based but with slightly metal leads and guitar sounds. You can tell Discharge was a bit of an influence still and any fan of that band will find a lot to like in this EP. It’s certainly a lot better than some of their late 1980s offerings and it’s good to see the band still has something to offer and continues to have relevance and would find a comfortable home in any punk’s record collection.